Switching back to coarse cereals can offer multiple benefits: Study 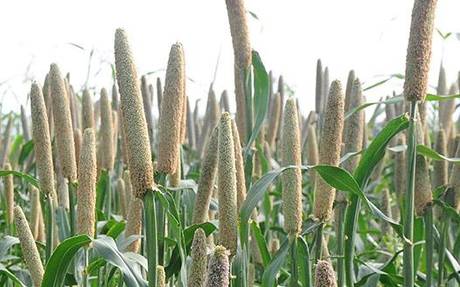 India can benefit substantially on multiple fronts such as nutritional security, energy and water utilisation and even cut its greenhouse gas emissions if it promotes the cultivation of coarse cereals, showed a study by researchers from India, Austria and the US.

During the Green Revolution of the 1960s and the 1970s, the focus has mainly been on increasing rice and wheat output. As a result, a large number of farmers shifted away from more nutritious coarse cereals to high-yielding crops such as rice, leading to narrowing in the diversity of cultivated crops.

Between 1966 and 2011, the total cropped area for monsoon cereals remained nearly constant, but harvested areas dedicated to monsoon rice increased from 52 per cent to 67 per cent. Currently, rice accounts for 74 per cent of kharif cereals production, 80 per cent of energy and 81 per cent of water used for cereal production in the season. Besides, nearly 90 per cent of greenhouse gas emissions from kharif cereals production comes from rice alone. In a study published in the prestigious journal, Proceedings of National Academy of Sciences, the scientists, led by Ruth DeFries and Kyle Davis of Columbia University in the US, on Tuesday, showed that there can be multiple benefits if farmers were encouraged to switch back to coarse cereals. They found that increasing combined calories supplied by coarse cereals such as finger millet, pearl millet and sorghum from the present 14 per cent to 21-32 per cent can help improve the nutritive value of food, apart from reducing irrigation demand, energy use and greenhouse gas emissions.

“This is the first time that the various nutritional and environmental aspects, including water use, climate resilience, and greenhouse gas emissions, of coarse cereals have been analysed in a holistic manner,” DeFries of the Department of Ecology, Evolution and Environmental Biology at Columbia University told BusinessLine.

The authors found that planting more coarse cereals could on average increase available protein by 1-5 per cent, increase iron supply by between 5-49 per cent; increase climate resilience (1-13 per cent fewer calories would be lost during times of drought); and reduce GHG emissions by 2-13 per cent. The diversification of crops would also lower demand for irrigation water by 3-21 per cent and reduce energy use by 2-12 per cent, while maintaining calorie production and using the same amount of cropland.

“To make agriculture more sustainable, it’s important that we think beyond just increasing food supply and also find solutions that can benefit nutrition, farmers, and the environment. This study shows that there are real opportunities to do just that. India can sustainably enhance its food supply if farmers plant less rice and more nutritious and environment-friendly crops such as finger millet, pearl millet, and sorghum,” said lead author Kyle Davis, a postdoctoral research fellow at the Data Science Institute at Columbia University, New York.

DeFries said some States in India are starting to include coarse cereals in their public distribution systems, which promotes cultivation, as would increased research attention on improving yields of coarse cereals. Davis said it was important for the governments to increase public awareness on the nutritional and environmental benefits of coarse cereals.

“One key insight from this study was that despite coarse grains having lower yields on average, there are enough regions where this is not the case. A non-trivial shift away from rice can therefore occur without reducing overall production,” said study co-author Narasimha Rao, a researcher at the International Institute of Applied Systems Analysis in Austria.

The authors point out that the Indian Government is currently promoting the increased production and consumption of these nutri-cereals — efforts that they say will be important to protect farmers’ livelihoods and increase the cultural acceptability of these grains.

With nearly 200 million undernourished people in India, alongside widespread groundwater depletion and the need to adapt to climate change, increasing the supply of nutricereals may be an important part of improving the country’s food security, they said.

Among Indian authors of the study were Ashwini Chhatre and Nabin Pradhan of the Indian School of Business in Hyderabad and Suparna Ghosh-Jerath of New Delhi-based Public Health Foundation of India.

First published by The Hindu Businessline on 21 Nov. 2019