By Rasika DhavseonFeb. 28, 2014in Learning and Education

With its firm belief in ‘Learning by Doing’, Vigyan Ashram at Pabal, Maharashtra has, over past 3 decades, transformed the lives of hundreds of rural youth who the mainstream education system might have rejected as ‘failures’. A modern version of the Gurukula system, “Vigyan” means ‘Search of Truth’ and “Ashram” symbolises ‘simple living and high thinking”. 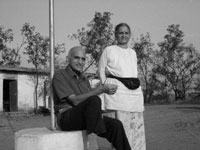 Dr. S S Kalbag has devoted 20 years of his life to educating the rural youngster. His education is of a different kind, eliminating the formal structure of a classroom, blackboard and books, and incorporating the wisdom of life, experience, and hands-on work. He regards science to be sacred and the inculcation of a scientific temperament to be a holy quest. The recipient of the 1996 Jamnalal Bajaj Award for services to the rural community, 74-year-old Kalbag gave up a lucrative career to pursue his vision of education  an education that would enhance the life of a village child and ensure against his migration to the city. In all these years of pursuit of his mission, he has been blessed with the unstinting support of his wife Mira.

Kalbag grew up in an engineering environment and it was back then in his childhood itself that he picked up his yen for tinkering with tools. His father migrated to Mumbai in 1903 and set up his home in near wilderness. He had to install his own water and power connections and take care of the sanitation works, etc. As Kalbag helped his father with all these chores, he developed a natural liking to do things with his own hands. He even had a laboratory set up at home, where he experimented with all kinds of devices. This passion for engineering continued all through his life, and more than that, it gave him a different perspective of how learning and education should be.

“I benefited from the way I learned things  by actually doing them. This was not something I learned in school. Later on, when I looked back at my childhood, I realised how incongruous our education system was, and I felt I must pass on to others my way of hands-on education, says Kalbag. While this lingered in the back of his mind, he went on to obtain B. Tech and an M. Tech degrees in Mumbai, before proceeding to the University of Illinois, Urbana for his doctorate in Food Technology. He returned to India and took up his first job at the Central Food Technological Research Institute, Mysore.

I was 27 then. I decided that for 27 years, I had been a student, and so, another 27 years I would give to be a householder (Grihasthashram). Then I shall enter the phase of Vanaprasthashram and devote the rest of my life to the service of mankind, he says, explaining his philosophy.

He married Mira, joined Hindustan Lever Ltd and rose to become the head of the Engineering Division. All along, he was firming up on his plans to work in the field of education. His premise that working with the hand stimulates the intellect received statistical backing by a survey he conducted among the street urchins in Mumbai under the aegis of the Homi Bhabha Centre for Science Education, TIFR. The kids were smart and could manage a range of tasks efficiently, yet they did not do well in the schools they attended, because the syllabus did not match their skills. I thought the way they learned things  from life itself  was the right way. But of course, the syllabus in the corporation-run schools would not change to accommodate my views. That was when someone suggested I should meet J P Naik and Chitra Naik of the Indian Institute of Education, Pune, he says.

On discussing with the Naiks their philosophy of education, Kalbag realised he had found a partner in thinking. In 1981, he and Mira visited the night schools run by the IIE in five different areas. They were also on the lookout of a place to set base and begin their work. Eventually they narrowed in on Pabal, off the Pune-Ahmednagar highway. The place was drought-prone, like many parts of India outside the monsoon season. Kalbag wanted a place that was away from any major city and Pabal, ideally, was away from the highway and would not easily become a suburb of Pune. Trekking through the villages around Pabal for seven days, he gauged the response of the local residents to his ideas of education. He finally decided he had found his place and submitted a formal project to the Department of Science and Technology in 1981. Work in Vigyan Ashram commenced in January 1983.

The beginning was simple – imparting multi-skill training, developing a problem-solving attitude, and stimulating the intellect. The education system as we know it today, Kalbag concluded, is inefficient. It teaches very little. For example, a child of two has learned at least one language by herself, effortlessly. In 10 years of schooling, how many more languages does she pick up? He points out that nearly 90% of children enrolling in primary schools do not cross the matriculation level. We may be led to assume that this is the percentage of duds in our systems. Yet, it is these very dropouts who build our houses, repair our cars, run most of the sma industries, farm the lands. How do they manage to do so much? “I call this the natural system of learning as learning while doing work in real life situations'”, elaborates the new-age teacher. The aim of Vigyan Ashram is to identify the core of this system and graft it into our existing educational patterns to make it equally efficient. Consequently, Kalbag and his team of like-minded individuals developed a system called Rural Development through Education System (RDES).

This is mainly education through development work – giving paid services to the community and using this as a means of education that imparts hands-on training in all skills relevant to rural areas. The RDES exists in both a formal mode (8-10th standards in schools) as well as in a non-formal mode as a one year course targetted at school dropouts (post 8th standard). The formal course is recognised by the State Education Board for SSC (Maharashtra) and there are about 20 schools implementing this in different parts of the state. The course for dropouts (post 8th standard) helps the students learn in real life situations in the areas of Home-Health, Agriculture-Animal Husbandry, Engineering and Energy-Enviroment. Necessary theoretical briefing is also included. Students also earn by taking jobs on contract. The course is fully residential and awards a diploma from the National Institute of Open Schooling, (MHRD, Delhi) The Ashram’s campus, built by staff and students themselves, includes dome houses, a mini tractor, and water-prospecting machines. It encompasses Kalbag’s vision of a 21st century school being a group o self-supporting industries that provide hands-on experiences to students, while they are absorbing theoretical information through self study using computers and the Internet. All this happens under the supervision of a Guru who looks after the value system in all the life transaction. “We want our students to start their own enterprises in their villags and thus reduce the migration to cities. There are many who have done that and are running their industries successfully. But these are not my success stories, they are their own. My success story will be when the system runs without me”, insists the 74-year-old man.

The Ashram also embodies the basic tenet that Kalbag and Mira follow in their personal lives – high thinking and simple living. Llife here is hard; water is scarce, power erratic. But it is rich with the satisfaction of having learned to do things with one’s own hands, and armed with the knowledge this education will actually bring in a livelihood as well.

Links from the web on Vigyan Ashram:

i am impressed with Late Mr.Kalbag SIr’s Hard efforts, wish to visit the place personally

I had visited to Pabal and meet Kalbag sir and Meera Madam… I lived there for a week where i found that Neelima Sharma- Maganase award winner was there with their work..