All Photos by Rucha Chitnis “The elders used to call Myntdu River their mother,” shares H. H. Mohrmen, a Unitarian minister and an environmentalist from the Jaintia tribe in Meghalaya. Mohrmen is in a jeep with journalists, who are traveling to cover a unique riverine festival that is hosted by elders from communities downstream of Myntdu.  The drive on winding roads in the West Jaintia Hills passes by tall areca nut trees wrapped in pepper vines. Below, a rust-hued riverbank glistens in the sun.

In the local Pnar dialect, Myntdu is known as “ka tawiar ka takan,” meaning “our guardian angel.”  Ironically, the “guardian angel” today is lifeless; decades of coal mining in the Jaintia Hills have all but destroyed this once thriving river. Tribal elders, who are founding members of Borghat-Jaliakhola Aquatic Life Welfare Association (BJALWA), are hosting the riverine festival to take a stand for the health of their “mother” in deep peril. The mission of BJALWA is to reconnect tribal communities with Myntdu, revitalize their culture and to spark action and dialogue for restoration efforts.

BJALWA members are galvanized, in part, by the 2014 ban on coal mining in Meghalaya issued by the National Green Tribunal (NGT) after a petition was filed by a student’s union in Assam that implicated coal mining in the pollution of Kopili River  downstream. Last year, Myndtu, along with Lukha River in eastern Meghalaya, made national headlines after turning an eerie shade of blue. Environmentalists blamed mine run-off and acid mine drainage. Downstream, this was not news; tribal communities have long suffered the deleterious consequences of decades of coal mining in the Jaintia Hills.

“Before mining, we had abundant fish. We had drinking water from the river. Now we get our fish from Bangladesh,” bemoaned Phran Rymbai, an elder from the War tribe, who is also a member of BJALWA.  “Unlike the elders, sadly the current generation has lost its connection with Myntdu, because the river has been lifeless for many years now and is used mostly for transportation,” explained Mohrmen.

The Curse of Coal

Coal mining in the Jaintia Hills began in the 1970s. Within a decade, the mining had devastated many downstream villages of Myndtu, irrevocably altering the very fabric of riverine communities. As their life source, the once plentiful fish, vanished, tribal communities switched to betel nut and pepper cultivation.

Children’s rights activists and environmental advocates condemned mining in Meghalaya on many fronts. Besides polluting and scarring the landscape, the “rat hole” mining technique was denounced for employing many children from Nepali and Bangladeshi migrant communities, who dug narrow tunnels with their bare hands and pick axes.  Despite numerous fatalities and grave injuries, rat hole mining remained largely unregulated in Meghalaya. The 2014 NGT ban brought much relief to civil society groups in Meghalaya, who had mobilized for years to stop environmental destruction and labor rights abuses in the mines.

The festival brought together hundreds of villagers—elders and youth— an effort to slowly rebuild a lost bond. The spirited gathering showcased canoe races, football and swimming competitions and a large feast.  Kran Syrti, an elder of the Pnar tribe and one of the founding members of BJALWA, reminisced days of his youth when the Myntdu was a lifeline for his community.  “We used to catch fish that weighed 50 kilograms!” he shared. “This river was a source of our food and our livelihood.”  Elders, like Kran, recall seeing scores of dead fish floating on the river in the 1980s. “We knew it was coal mining,” he said. “Everything died–the fish, snakes. We used to have two species of tortoise in the river.”

Founding members of BJALWA long for the aquatic life to return to Myntdu so that the youth, too, can experience the abundance of Meghalaya’s rivers.  Journalists, like Mohrmen, are using writing as a key a tool for their environmental activism to bring attention to the realities of downstream communities and highlight community conservation efforts.  “Mining in Meghalaya has not only killed streams and rivers, but it has most importantly disconnected people from nature which their ancestors have for so long considered sacred because it provides and sustains all their needs. Mining and unsustainable development is the major cause of the erosion of our culture and tradition,” wrote Mohrmen in The Shillong Times.

The elders of BJALWA agree. They are pinning their hopes on their new community-based organization to revitalize a lost connection with their “mother” through public education and shared activities. “It’s important that all mining activities are completely banned for several years. No transportation and no extraction should be allowed. Only then will the environmentbe protected, ” observed Sannio Siangshai, a journalist attending the festival. Siangshai also pointed out that coal mining was not the only culprit contributing to the pollution. Meghalaya’s rivers are now also threatened by burgeoning limestone mining and cement factories.

As the festivities continued on the Myntdu, Mohrmen pointed to small pieces of coal scattered across the riverbank.  “We hope our rivers are revived,” he remarked. “Because when a river dies, so does our culture.” BJALWA members concur. They also exemplify the vital role of elders, who are keepers of stories and folklores of Meghalaya’s embattled rivers, in passing cultural knowledge to the next generation.  “To us, these are not just rivers. They are living entities,” said Mohrmen. The Myntdu River has deep cultural and spiritual significance for tribal communities in the Jaintia Hills. Writer and environmental activist, H. H. Mohrmen, shows pieces of coal picked up from the riverbank of Myntdu. Football competition of youth by the river marks one of the festival activities.  The elders hope that these activities will rebuild a lost bond with Myntdu.

Canoe races, of both men and women, drew loud cheers. Journalists cross a bamboo bridge to interview BJALWA members and document the festival. Writers, like Mohrmen and Siangshai, have played a key role in raising public awareness on coal mining pollution and the impact on downstream livelihoods and ecology. The Myntdu River, once abundant with fish, remains lifeless. Much of the fish now comes from neighboring Bangladesh. As the fish from the Myntdu died, communities shifted their livelihoods to areca nut and pepper cultivation. “Now that the mining has stopped, we hope the fish return,” said one member of BJALWA. 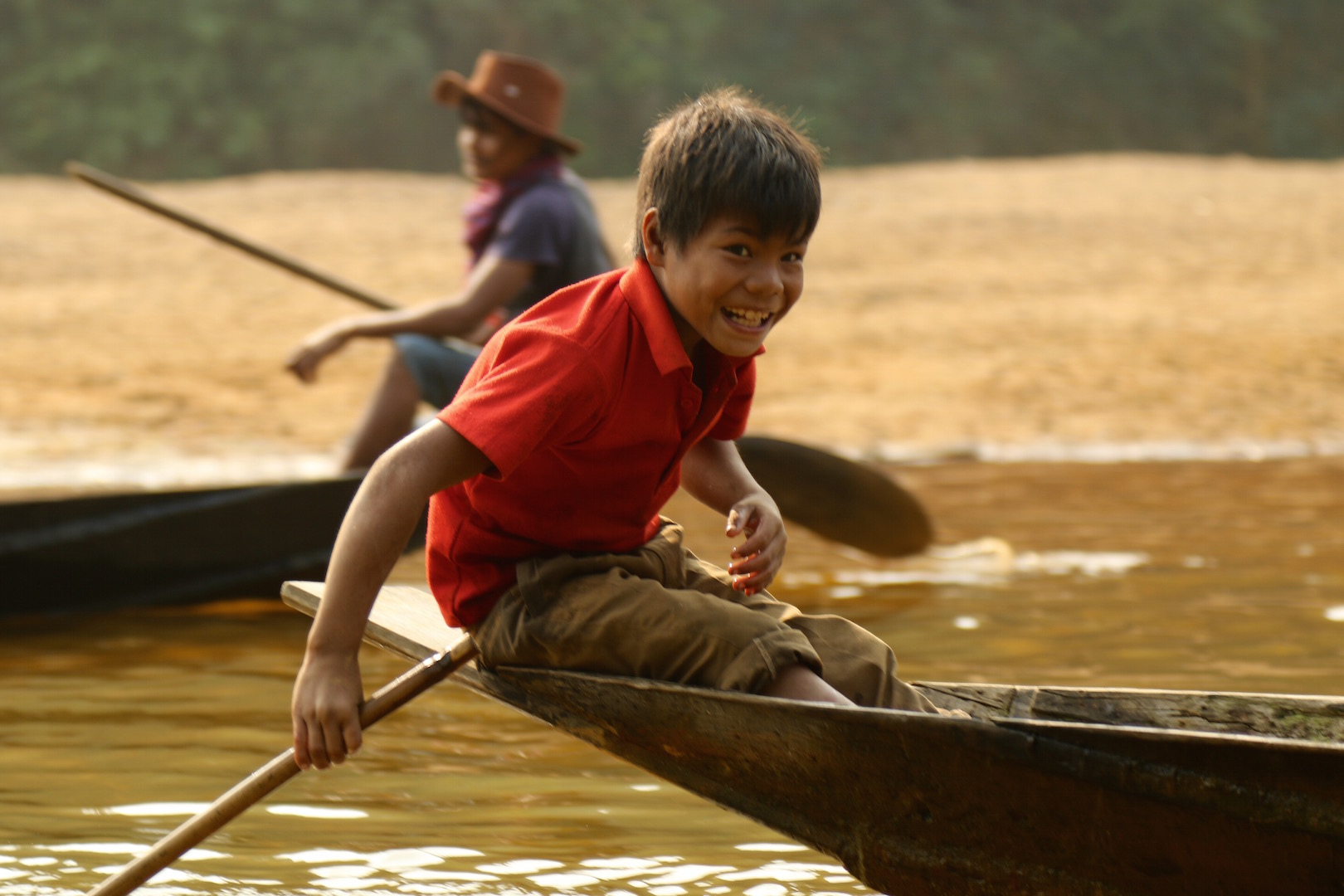 BJALWA members hope to inspire and galvanize tribal youth to become stewards of the river and join the restoration efforts.