Behind the beautiful forevers 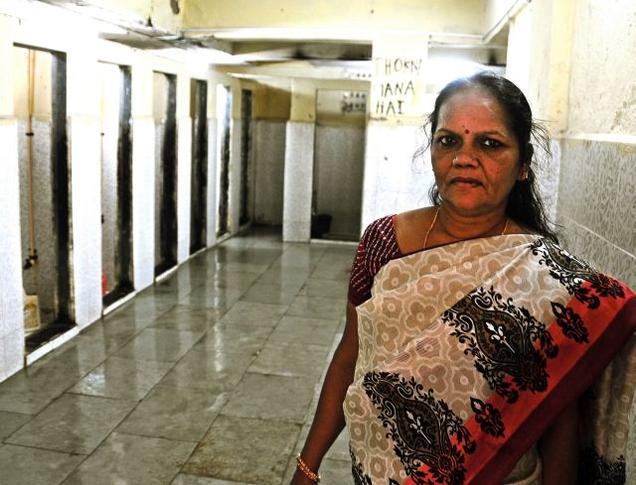 In informal settlements, a clean toilet is like sunshine. Mahila Milan has built over a hundred of them in Mumbai.

Shanti Shinde walks down a small lane off one of the busy roads near the Wadala station to the Sulaiman compound. She goes past a courtyard where boys are playing cricket and passes through narrow corridors between houses before she reaches the toilet block. The two-storey block is well maintained, with each unit cleaned two or three times a day, and a full-time caretaker oversees the work. She refurbished the block a year ago and maintains it for the community, and this is a routine supervisory visit. Ms. Shinde speaks in animated detail about the challenges of refurbishing the toilet block that had fallen into disuse after it was built by the Corporation about five years ago.

She details the work it took to find contractors to lay good tiling, find strong material for doors, and, most important, get permissions to dig a borewell for water supply.

Only at the very end does she say, with a half-smile, that she knows to do all these despite not being a trained architect. “I’m not educated at all,” she says, “but I started this work because I used to visit communities like these as part of the Mahila Milan and talk to them about the importance of using and maintaining toilets rather than going out in the open.”

Ms. Shinde knows first-hand the difference it can make for women in slums to have safe, clean sanitation facilities, the time it can free up for them, the freedom it gives them.

She is a leader from the Mahila Milan women’s collective, and this is one of the many sanitation projects she has obtained contracts for over the past four or five years from the Brihanmumbai Municipal Corporation.

Mahila Milan is a network of poor women’s collectives, part of a federation along with the National Slum Dwellers’ Federation and the Society for the Promotion of Area Resource Centres (SPARC). As the official non-governmental organisation in the partnership, SPARC negotiates with the Corporation and other bodies to secure contracts for women like Ms. Shinde to take a leadership role in upgrading infrastructure.

The idea is simple: communities are best placed to decide for themselves what they need.

Ms. Shinde explains how the toilets she has built differ from those built by the municipality: there are separate entrances and spaces for men and women, for instance, and rather than pay-per-use, there is a more affordable monthly pass for each family. Once built, she says, the community takes over; a caretaker appointed by the community is provided a room. In this way, the Mahila Milan can pass on the knowledge it has acquired on building and maintenance to more people.

Women from Mahila Milan have built over a hundred toilet blocks in slum areas across the city, benefiting thousands of residents. They are a crucial element in the layered conversation currently under way about the city’s development, about upgrading slums and improving the lives of over 50 per cent of the city’s population that live in these informal settlements, and, most important, enabling them to be change agents in the fulfilment of their own aspirations.

Just as she was moved to a proper house, Ms. Shinde says it’s the Mahila Milan’s aim to see that all of Mumbai’s slum dwellers eventually get proper housing. When that day comes, she says, knowledge about upgrading and maintaining infrastructure in their own spaces is the best way to organise communities for that upward shift. “The government may give them a house but how they live there, how they organise and maintain things like water and electricity is up to them,” she adds.