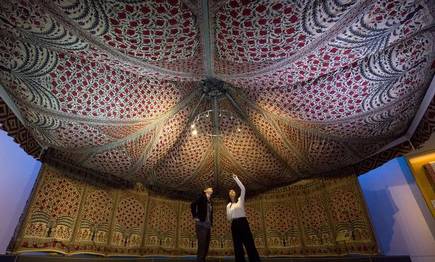 Did we somewhere lose the thread of context-driven architecture?

Gottfried Semper, a 19th century German architect, saw skills other than masonry and carpentry as shaping architectural practice. With his anthropological lens, he included pottery, ceramics and textiles as fundamental elements of building.

In fact, the artisanal-industrial world of textiles and processes of weaving were integral to his conception of architecture — not a sideshow. He saw Europe’s textile traditions playing a significant role in transforming the practice as it faced challenges generated by industrialisation and modernisation.

Woven tents, reeds cladded with mud, interlocking wooden beams — all involve cloth making, the principles of weaving and an awareness of textures of fabric that have historically been central to creating habitats.

The tent, the mat, the curtain, the awning, and all such materials were valued for their lightness and ephemerality, which they infused into structures, homes and habitats.

They may have initially responded to needs of movement and flexibility, or the temporary occupation of spaces or were used simply to create lighter structures, but eventually became part of conventional practice.

In 2015, the Victoria and Albert Museum in London organised an important exhibition on the architecture and textiles of India. The exhibition’s website states: “A number of the textiles in the Fabric of India exhibition were made to be used in architectural contexts, whether as furnishings for buildings or as a type of portable architecture in themselves”.

The author Rosemary Crill goes on to say, “When we visit historic buildings in India today, they are usually empty shells which give no idea of how they could function as liveable spaces. The missing element is textiles, whether in the form of lavish furnishings and patterned clothing, or basic practical additions like awnings on the building’s exterior. Textiles can transform not just the appearance of a building but also its function”.

Such spotlighting brings our attention to such missing elements in contemporary architecture, but more importantly, to their missing memory and experience.

The thoughts and framework of mainstream architectural practice today allow this dimension of building to recede from significance. Conversely they encourage the materiality of brick, concrete and steel to become metaphors to think about habitats themselves.

It is not only a range of materials that have been excluded from practice, but also different ways of thinking about the built environment. Weavers know well that fabric is produced by the meticulous meshing of countless threads. These threads are useless alone but together they produce a useful artefact, which creates its own space. “Weaving together” is the etymological meaning of “con-text”. It is only when elements come together in a specific way that they acquire an internal coherence and can function as a whole.

Along with the use of textile in architecture, attention to the texture of a building also tends to get lost. Which building in central Bengaluru, Delhi or Indore combines different types of textures to produce something special or new? Most contemporary buildings lack any sense of craft.

They are like 3D prints in concrete; copies of copies, whose designs mirror the financial plans of investors that will never come close to them. Collectively they produce inert neighbourhoods with no sense of locality. Supple envelopes, fluid relationships between the inside and the outside, forms driven by context, all sound like anachronistic fantasies in such places.

Even if not literally, we could at least metaphorically take solace in the idea that most vernacular neighbourhoods in Indian cities are like woven urban fabric made by the movement, habits and activities of ordinary people engaged in making their environments whole, bit by bit.

The dominant aesthetic in traditional Indian cities and bastis is that of such a fabric. Made of many thin threads which have the potential of forming patterns as they come together, made painstakingly by inhabitants and users.