The Bengaluru FC footballer who turned to law

PostedonAug. 04, 2019in Society, Culture and Peace 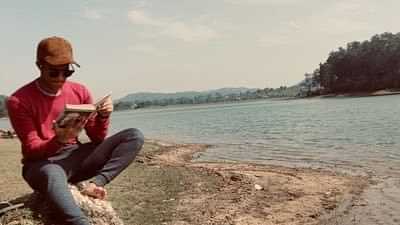 Dr Bhimrao Ambedkar, the architect of India’s Constitution, is driving through a village where an angry crowd of workers are sloganeering for justice.

Ambedkar is curious and on asking the workers, is told that they had been working on the farms of a gram panchayat member and hadn’t been paid for the past three months.

Ambedkar introduces himself as “lawyer Bhimrao” and takes charge to confront the landlord.

He then goes to explain to the workers the powers and functions of the ‘janata nyayalayas’ (Lok Adalats), as well as ways to obtain free legal aid.

The entire sequence is from a graphic novel of the ‘Gonzo’ genre that the Karnataka State Legal Services Authority (KSLSA) is promoting to increase legal literacy in the state.

The 92-page novel, with colourful characters and text in Kannada, breaks down several complex legal concepts, in a bid to increase legal awareness. It is the brainchild of a once professional footballer who quit the sport to take up law.

So far, the Karnataka State Legal Services Authority (KSLSA) has published 2500 copies of the novel.

The Bengaluru FC footballer who turned to law

For Vignesh Avarekad, 24, his childhood dream was all about becoming a professional footballer. Avarekad was on track and had made it to the apex of the Indian football structure — he was a member of the Bengaluru FC under 19 squad, which also served as the reserves between 2013 and 2015.

“I have an injury called chronic compartment syndrome which does not allow me to play at a higher level,” he told ThePrint, adding that he was disillusioned by what he saw in the game. “During my stint at Bengaluru FC, I came across age fraud in Indian football,” he added.

This, he said, drove him towards studying law because he wanted to understand the “social and legal structure that allows age fraud to flourish in India”.

It was during his law course at Christ University that Avarekad began dabbling with the graphic novel genre. “I was very frustrated in my initial three years of law school. I began sketching and at the same time I was called for a legal aid camp,” he said. “We were sent to villages, government schools, conducting surveys on the basic facilities available to them… We tried to help them with legal cases by collecting information about the cases.”

It is then, he says, he realised that he did not want to pay mere lip-service to those seeking legal help in the camps. He also noticed that the villagers were keen observers of the legal aid street plays. So, he began directing and acting in these plays.

“I realised that people really learn about the law through these plays,” he said. “The skits essentially got the law to them.”

He found his opportunity when he came across the handbook that the KSLA was distributing to the villagers. He says that it struck him that while the street plays were effective, they were limited in their reach. “The thought to convert these plays to a tangible format gave birth to an arduous and demanding journey to pen and draw a graphic novel in Kannada that served as a graphic representation of some of the street plays that the Legal Aid and Awareness Committee of Law School conducted in the rural areas,” he said.