Some heritage for your halwa

By Chitra BalasubramaniamonJan. 24, 2020in Environment and Ecology

This winter, turn to lesser-known indigenous carrot varieties, including black, white and purple ones 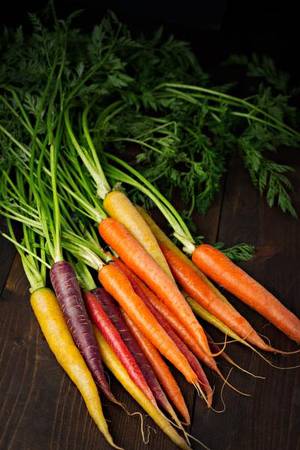 In India, especially the North, come winter and it is carrot season, with the ever-popular gajrela or gajar ka halwa. Not all gajar ka halwa, however, is the familiar orange we are used to. White carrots or safed gajar is also used to make the halwa, as is the black carrot or kala gajar. The latter is also part of a kanji made in the North during winters. Varanasi is particularly popular for its black carrot or kala gajar halwa. However, as cultivator G Krishna Prasad of Sahaja Samrudha points out, numerous other varieties of carrots exist in India as well. Krishna has been responsible for encouraging cultivation of heritage, heirloom varieties of cereals, rice, vegetables, and tubers, and bringing it into the mainstream. Krishna explains, “Before the 17th Century, almost all cultivated carrots were purple. Black or purple carrot was widely cultivated in ancient India. The modern-day orange carrot wasn’t cultivated until Dutch growers in the late 16th Century took mutant strains of the purple carrot and gradually developed them into the sweet, plump, orange variety we have today. It then came to India through the British. India’s pride is native black and purple carrot, which we have ignored completely.”

Raman Mann, an organic farmer who organises the Chandigarh Organic Market, says, “In Punjab, several farmers grow the black variety of carrots along with the traditional red one. The black carrot is grown using old preserved seeds. The white variety is not grown here.” Mann adds, “The black variety is an interesting one and can be used in a number of ways. It can be used for making kanji, murabbas, pickles and halwa. In my opinion, black carrot halwa is tastier than the usual red one. It also looks lovely, given its purple colour.”

To popularise these indigenous varieties, Karnataka-based Sahaja Samrudha embarked on a project. Anitha Reddy, Trustee, Sahaja Samrudha, works on vegetable projects providing market linkages and says, “This region, that falls in the Anekal Taluk of Bangalore Urban District, is renowned for carrot cultivation. The farmers belong to the Tillanga or gardener community, and have green thumbs. They grow over 40 varieties of vegetables, including 12 of brinjals. They were growing hybrid varieties of carrots which are resource intensive. We introduced four varieties of carrots and grew the hybrid one as a test exercise.” The farmers could test the produce and compare the yield with the hybrid one. The yield was more or less the same, and farmers took to the four varieties — red carrot, yellow carrot, karud kesari (orange coloured variety) and black carrot.

Reddy adds, “The farmers grow carrots from July onwards, going up to March. They are growing red, kesari and black.” Of these, the black variety is grown more for its health benefits. However, the most interesting carrot is the yellow one. It smells like jeerige maavu (jeera flavoured variety of mango), so the women grow these in small patches and use it to make pickles.

White carrots are grown in Uttar Pradesh, and make their appearance in Delhi during the winters. These are used to make the irresistible safed gajar halwa. Nothing much is known about white carrots, not even whether they are indigenous to India. However, as the tradition of white gajar halwa is about 60 years old, it is possible that it is an imported variety. Dr Shrawan Singh, a scientist at Indian Agricultural Research Institute, Pusa, who has worked extensively on carrots, says, “Unlike mangoes or chillies, the desi varieties of carrots do not have any names. They are known from the area they are grown, like Hisar, Sirsa and so on. At Pusa, several such desi ones have been improved for cultivation. White carrots are not indigenous but more of an exotic variety. The production is not high.”

Sahaja Samrudha’s seed calendar talks about wild carrots and purple carrots. Wild ones grow like weeds, and their seeds have been preserved by a farmer from Gadag, dryland region of Karnataka. It may not be suitable for commercial cultivation, but excellent for loose soil and holds rain water. The case of the purple carrot is very interesting. It has the highest shelf life, highest carotene content and looks very pretty with a beautiful purple tinge. The calendar gives varieties and their growing methods.

Fascinating article, are these carrot varieties sold in Bangalore, or Karnataka, or are they exported. Can the seeds of these be accessed from the growers? Please give us the contact information!!

Please click on highlighted words Sahaja Samrudha in the story, or use the link sahajasamrudha.org, to read info. on marketing.
They state that ‘Organic bazaars are established in WIPRO and Indian Institute of Sciences premises, Bangalore.’