Men in menstruation – are we addressing the elephant in the room?

By Jointly by Project Uger and Eco FemmeonAug. 07, 2018inHealth and Hygiene

Conversations with men can reveal a lot…

“Women never include us in menstruation matters. They talk in whispers and codes all the time”

“A woman is impure during menstruation. I will not touch my wife at this time – take any sacred text – Bible, Koran – it will tell you this.”

“I only understood menstruation properly after I got married, when my wife explained things to me. I felt so stupid then, that I had not made any effort to understand earlier.”

“Yes, I feel very sorry for my daughter, she has so much stomach pain during menstruation.”

Few men have dared to enter the arena of menstruation.  A biological phenomenon – a body expulsion unique to women – menstruation is connected to every man, through his mother, sister, wife, daughter, niece or aunt and yet it receives little focus.  The word “men” may well be present in the spelling of menstruation; but this is where it ends. Many men are nervous about menstruation, whether acknowledging it, speaking about it or comfortably buying menstrual products for their partners.  Until recently, the subject has been seen as women’s business.

When men are missing… 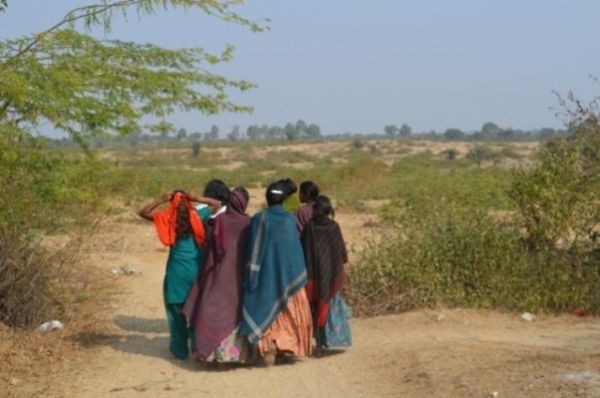 Let us look at some examples from the ground.  In Figure 1, a group of rural adolescent girls are heading out in groups away from the main settlement for defecation and urination.  Once they have attended to nature’s call, these girls will hurriedly change their menstrual product behind the bush, or when they return home. It is recommended that, to maintain hygiene, a menstrual product be changed at least three to four times a day. However, in these circumstances changes are made only twice, at dusk and dawn, under the cover of darkness so that no one can see.  This directly compromises health.  It also reflects a lack of awareness and prioritisation about women’s need for safe and private spaces with water facilities.  If men in the community were sensitized to women’s need for safe and private spaces with water facilities, this photo may look considerably different.

At schools, often girls’ needs are not taken into account during infrastructure design. The two pictures below show existing toilet facilities at a government school in a rural location.  Consider the location of the girls toilet in Figure 2; girls have to pass the boys’ urinals first to access the bathroom located after that. The urinals are open, so girls are embarrassed to pass by the urinating boys at break time. Even if they clear this first hurdle, girls are confronted with a second barrier; a clogged toilet (Figure 3).  Add to this the bullying or teasing that girls may experience from boys about menstruation or menstrual products and it is hardly surprising that girls may opt to stay at home during their periods. 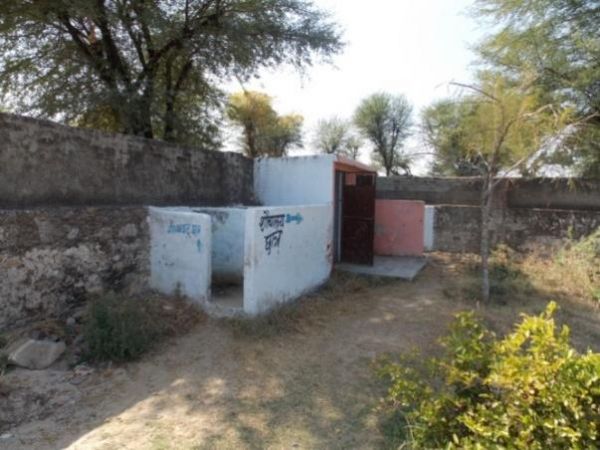 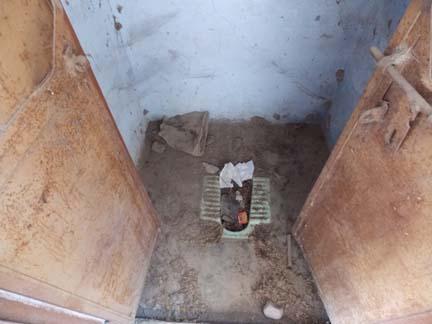 In the government construction work site location in Figure 4, there is no space or shelter to change menstrual cloths, with the closest tree cover 800 meters away. Additionally. there is no running or stored water and soap for washing hands or menstrual cloths. A small bamboo shelter may suffice as a temporary measure but even this is missing, as the male construction contractor did not perceive or understand this necessity. When men have been involved…

There are examples where men have made significant contributions. Dr Earle Cleveland Haas, a general practitioner in America in the early thirties,  devised his own versions of cotton and bandage plugs to control bleeding problems in his patients. He perfected an item that could be inserted into vagina, now the well known tampon, and patented it in 1931. The three Johnson brothers, of the multinational company Johnson and Johnson, created and sold their first batch of sanitary napkins in the year 1896-1897.  A more recent Indian male contributor is Arunachalam Muruganantham, developer of the low cost pad manufacturing machines.  Nonetheless, these contributions have come at a cost and can cause more harm than good.  These mass production business models of disposable products, often laced with chemicals, cause significant damage to the environment and women’s health and usually fail long term sustainability tests.

However another man, Anshu Gupta, has taken a safe, eco-friendy approach to menstruation.  In 2000, Gupta founded the NGO Goonj in India which works in disaster zones at times of flood, earthquakes and other emergencies.  When people displaced, Goonj plays a valuable role in menstrual management by making shelters exclusively for women’s needs and providing clean menstrual cloth.

There have been creative initiatives too, such as the one of its kind  “Museum of Menstruation and Women’s Health” (MUM) that celebrates the biological process of menstruation and menstruation management design.  MUM was started in 1994 by Harry Finley in the basement of his house in Washington, America.  Today, it exists as an online, virtual museum documenting artifacts, posters, stories, poetry, paintings and other related items from the 19th century. 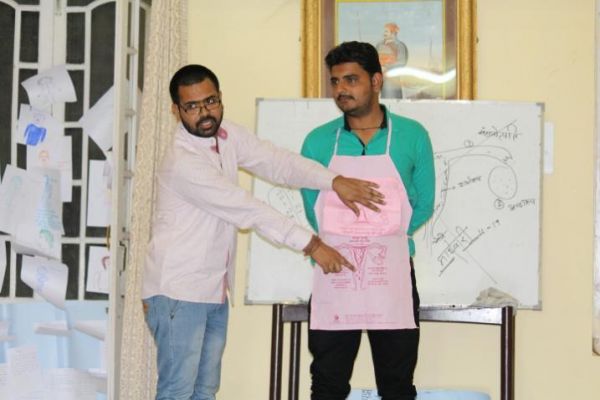 For an example closer to home, we need look no further than Dr. Kailash Brijwasi and his team at Jatan Sansthan, in South Rajasthan, which spearheads the UGER project.  UGER’s approach to menstrual hygiene management awareness is unique in that men lead the menstrual health education workshops.  These workshops not only break the silence around menstruation, but also signal that men are coming forward to accept the elephant in the room.  This strategy clearly indicates that men are involved in this business and are here to stay.

Taking it one step further, the UGER project also teaches men and boys to stitch cloth pads for their wives, sisters, mothers and even fiancées!  In the district where Jatan works, there are currently seven instructors who teach pad stitching to other men.  This work is a powerful, public statement openly acknowledging menstruation and care for the women in their lives. Where to from here?

The answer is simple: involve as many men possible!  Men have a meaningful part to play in this conversation; as brothers, fathers, uncles, cousins, and teachers to name a few.  Only with understanding and awareness of menstruation and menstrual practices are men empowered to act.  These actions could be advocating for clean and private bathrooms, role-modeling period positive behaviour to students, communicating care and empathy rather than disgust and shame… or even stitching pads for the women in your life!

“I am going to gift this pad to my wife. She is away just now I cannot wait to see the look on her face when I give this to her!””

” I am single – no fiancee yet and I was still wondering what to do with the pad I had stitched. My office colleague (a woman) said please give it to me, I need an extra one and and then she took it away. So this activity of pad stitching has opened up so much conversation amongst all of us.”

“I bulldozed my sister into using reusable. Now she does not look at a disposable pad!”

“My wife now goes to the temple during her periods. No one had cared to explain the scientific reasons to us until we got involved with Uger.”