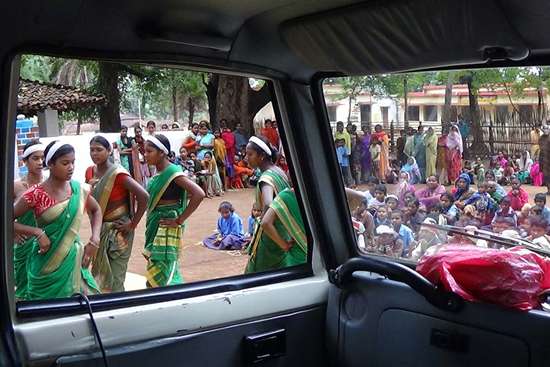 It’s 11 pm and the LED bulbs cast a dull, white light in the schoolyard in Ilmidi village, Bijapur district (Chhattisgarh). Around 200 villagers—the men, mostly drunk, the women sleepy but excited—stream in and sit down on the bare earth. Young boys perch on the wall and serve as ushers, flashing their battery-operated torch lights to guide people in. The crowd chat amo­ngst themselves, oblivious to the compere speaking about citizen journalism in Gondi—the language of the Gond tribe that’s spread across most of central India. They do murmur assent though when the talk turns to Gondi pride.

The restless chatter finally stops when 17-year-old Umeshwari’s voice suddenly crackles across the megaphone in a high pitch, “Ri RiLaa, Ri RiLa, Riiiiiiii.” Four other female voices join in, belting out lyrics in Gondi. It’s a charged performance, an hour long, but the energy never flags. The five tribal girls do everything—sing, chant, dance, act out a short, one-act play, even disappear behind the backdrop screen in between to turn puppeteers.

Some Kowachi, eldest of the five girls at 20, says they sing for adivasi welfare, for the re-establishment of their tribal culture and tribal language. There is little that’s political in their songs but the use of Gondi is in itself a statement. Umesh­w­ari Dugga, the lead singer, and Kowachi are both from an interior village near Kanker. Rano, Lee­lavati and Ramv­ati are from Mar­­kabeda village in Nar­ayanpur district, north-east of Bija­pur. Earlier that day, they had finished another performance at a village bazaar, stopped at Bijapur town where Outlook met up with them, before travelling on to Ilm­idi.

At Ilmidi, they are carrying the message of citizen journalism in Gondi that  community radio service CGNet Swara espouses: “If you have a problem, don’t wait for a journalist, just give a ‘missed call’ to a number. The number will call back, record your message in Hindi or Gondi and it will serve as an online petition for others to call the authorities on your behalf to fix your problems.”

Incidentally, there’s no support cast here—before the performance the girls themselves set up stage, get into costume, even arrange the instruments and props. The girls also had to cook dinner for the entire troupe, clean the utensils using water carried all the way from the village well, and sweep the yard where they would be resting for the night. All this after a burning day’s ride through the dusty, bumpy roads of Bijapur. (Less than 10 kilometres away, Warangal district in neighbouring Tel­angana has been reporting deaths in a near-50 degree heatwave.)

Villages like Ilmidi, as many others in the area, have few amenities. Electricity comes in spurts, as does mobile phone connectivity, the road is unfinished, drinking water is scarce, the only building in the area is a school, built six decades ago by undivided Bastar’s first Indian collector. (That collector, R.C.V.P. Noronha, went on to become the chief secretary of Madhya Pradesh for a decade and an administrative advisor to Goa after its liberation from Portuguese rule.)

The Noronha school walls are now adorned with Maoist graffiti. The girls read them out loud while fetching water from the village well. A fading headline speaks of a week-long celebration after the merger of Maoist parties (2004); a more recent one bans alc­ohol abuse in the village. The performance is over, but there’s little rew­ard for the  girls—some villa­gers give them Rs 200-300 worth food supplies as thanks for the entertainment. A chicken, a gift from a grateful village audience somewhere, cackles nervously from the back of the car after pack-up. Shivlal Usendi, one of the male co-performers, threatens to convert it into a meal. But the chicken continues its tirade as we travel from village to village, stopping at bazaars, where people even forego the mahua (the local brew) sellers, preferring the attraction of the Gondi performance.

“We have been on worse roads,” says Ramavati, as the Maharashtrian driver grimaces each time the car groans on the road to Avapalli, where a bazaar full of Gonds wait. “At places, the road would end and we’d walk five kilometres with our gear to perform at a village.” Ram­avati is the chatty one, letting us in on the fact that Leelavati can just about count till 10 and was learning to read and write from her friends while on tour. There had been two other girls performing with them, but they had gone home on leave. That left Umesh­wari as the lead singer. The talk then turns to home and the troupe says several girls from the villages had joined the Maoists and picked up guns. These girls are here, thanks mostly to supportive mothers who want their daughters to go out, get a taste of the world. But they are tired now, they have been on the road since December, save a week’s break in March. Monsoon is around the corner and they’ll be heading home for two months for the paddy-sowing season.

Meanwhile, leading this motley crew across Chhattisgarh is a very interesting man, Lalsu Suma Nogoti. He introduces the performance, manages the  sound, organises the whole effort, deals with the villagers and keeps the group’s spirits up. Nogoti is himself a tribal, of the particularly vulnerable tribe group (PTG), the Madiah. He’s the first one from his tribe to graduate from college, become a lawyer. His par­ents sent Nogoti to Baba Amte’s ash­ram to ensure that he’d at least be well-fed. Record marks in the seve­nth standard board exams got him interested in academics and he ended up graduating from Fergusson College, Pune, and get­­ting a law degree from ILS in the city.

In his youth, Nogoti had been part of left-wing movements and the Maoists in Maharashtra’s Gadchiroli forests had exp­ected that he would join the party. But Nogoti had a more pressing agenda, working on issues affecting the dwindl­ing PTG population. He is a calming influence on the troupe which also helps in the negotiations with the Maoists who are curious about CGNet-sponsored workshops and performances in the interior areas. CGNet Swara is led by former journalist Shubhrangshu Choud­hary from its offices in a crowded, two-storey building in Naya Raipur.

“The Maoists sent us a message—that this is good work but Choudhary’s book (Let’s Call Him Vasu, on the Maoist mov­ement) and other writings are not,” Nogoti says smiling. It’s no easy job, even dealing with the villagers has its perils. At Ilmidi, the villagers had postponed the performance to the next morning. But when the power returned, they just walked into the yard demanding a show right then.

Nogoti and the troupe gauge the res­ponse mainly on how many people hang back after the performance to make calls to CGNet’s numbers. Even so, the girls seem to take it to heart if the crowds do not respond to their performances or do not clap. Next is another nondescript village, another audience. Meanwhile, a senior police officer in Raipur later inf­orms us that a greater critic, the state, has classified CGNet’s activities (in unwritten, internal reports) under the ever-gro­wing label of “cultural fronts for the Maoists”. How long the girl band of Gond will sing is anybody’s guess.