By Gurvinder SinghonMar. 12, 2019in Environment and Ecology

In 2004, the first model of food forest started in the village supported by Development Research Communication and Services Centre (DRCSC), a non-profit working for farmers in West Bengal. 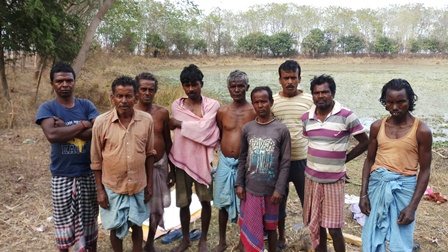 Agroup of landless farmers in a small village at Birbhum district of West Bengal have proved that new avenues of income can be created without depending on the government to provide job opportunities.

The 14 individuals took on lease the unutilised land from the local administration and have transformed it into a food forest by growing different types of vegetables and fruits. By definition, food forests or agroforestry produces sustainable crops but also becomes a habitat that feeds on insects that destroy the yield in order to be a self-regulating system.

The success can be gauged from the fact that a water body that was full of weeds has been cleared and made fit for fishing which has now become their prime source of income.

Sixty-year-old Madhab Lohar who stays at Khoshkadampur village in Bolpur Sriniketan block of Birbhum says that the food forest project implemented in 2004 has brought a sea change in their lives.

“We used to do farming on the land of others and had to share half of the produce with the landowner. We had to bear all the cost related to farming and often it resulted in losses because of shortage of rainfall and crops getting destroyed due to diseases. It was difficult to arrange square meals a day as we ran into deficits.”

In 2004, the first model of food forest started in the village supported by Development Research Communication and Services Centre (DRCSC), a non-profit working for farmers in West Bengal. The DRCSC organised the marginal farmers and the landless to form Pallimangal Swanirval Dal. “We also helped them to negotiate with the local gram panchayat to let the group have a vested fallow with an adjoining water body on lease for 99 years with an annual payment of Rs. 3,000. The group was motivated to plant extinct or near extinct species of trees and strategic crops to create a food forest,” says Sujit Kumar Mitra, programme co-ordinator, DRCSC.

He further said that the trees to be planted were selected by the group in accordance with their needs. Vegetables, pulses and oilseeds among others were cultivated as interim crops. The saplings were protected and nurtured by the group and the fruits and other produce were equally shared by the members, added Mitra.

Cut to the present, the group members say that the 22 bighas of leased land along with the water body from where they get regular food items have not only changed their lives but also the lives of villagers who procure the products of the food forest from them at low rates and sell directly into the market by eliminating the middle-man. “The food forest has brought a change in our lives. The villagers also buy the produce from us and sell it to the market. They also make profit as they do not have to depend on middlemen who extract their share,” says Prashant Lohar, a group member, adding that they have grown 30-32 varieties of fruits and fruit trees fodder.

But the success has come at a cost. The group members say that the land was full of wild shrubs and was unfit for cultivation when they took it on lease 15 years ago.

“The entire area was covered with shrubs and wild growth. Even the water body had weeds. It took several months to make the land for farming and water body fit for fishing. The entire patch has not only become environment-friendly but has also provided nutritious food to the vulnerable community during the crisis. It has also improved our livelihood status,” added Prashant.

On an average, the group members earn around Rs. 4,000-Rs. 5,000 every month after their own consumption. The chunk of their income comes from fishery in the water body.

“We catch over five quintals of fish every year from the pond. The fish is sold in wholesale markets in the neighbouring areas and also in small markets on retail basis. We also sell it to villagers by taking minimal profits,” said Tapas Lohar, another group member.

The group has won the support of the entire village by helping individuals in tiding over crisis with funds for treatment of critical diseases or marriages in their families. Apart from meeting the nutritional needs of the farm families, the programme has created new scope for generating a supplementary family income and has conserved and increased the local bio-diversity. It has also created a group asset and has benefitted the environment in multiple ways. Other models of food forest have come up in Kapastikuri Bagandanga village in Birbhum.

Even villagers who are non-members of the group admit that the food forest has benefitted them. “It has really helped us to buy the food and vegetables and low prices and sell them directly to the customers and even for our own consumption. They have put the barren land to an effective use and have generated employment for themselves and for others,” said Bishoi Das, a villager.