A new Chipko in Odisha We won’t allow anyone to cut our trees, say the women of Balarampur village

For three generations now, and spanning 40 years, Chaturi Sahu, 70, has been unfailingly sending one male member from her family to patrol the nearby Jhinkargadi forest to ensure that its trees and shrubs are untouched.

Year after year, her father-in-law, husband and son, who are part of the foot soldiers of Balarampur, a nondescript village in the central Odisha district of Dhenkanal, spend many days in the forest to keep the timber mafias at bay.

Now, the very existence of Jhinkargadi forest, so lovingly nurtured by its villagers, is under threat. So Chaturi has taken matters into her own hands.

Puna Khuntia, another woman in her 70s, does not have any males in her family to send to the forest. Her husband, now dead, used to work in a coal mine. She plays her part by paying wages to the men who guard the forest. The forest is important to the villagers; it’s a critical resource.

“The forest is our life,” says Chaturi, as she clasps a sal (Shorea robusta) tree, along with other women from her village. They are there to protect it from a workforce that has come to cut it down to clear land for a beer factory.

Chaturi and the other women have created a band that is always on the ready, and troops into the forest instantaneously whenever there is any tree-felling bid. “We have saved the forest for decades. No force can take it away from us now, not even the government,” says Puna.

What has made these women of Balarampur so desperate that they have invoked the famous Chipko movement of the 70s when people embraced the trees to prevent them from being cut? 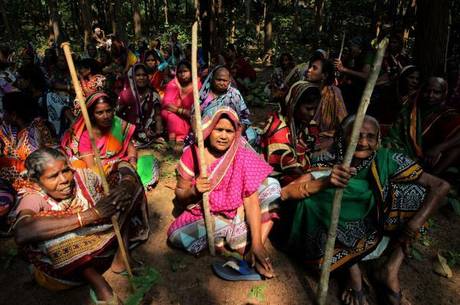 Till 2014, it was business as usual for Balarampur villagers. Two men from two families would patrol the 600 acres of Jhinkargadi forest each day, and inform fellow villagers if they came across any smugglers or poachers. Everybody was involved in the traditional rotational forest patrolling routine.

Then, a few years ago, the government began to look for large tracts of ‘encumbrance-free’ land to create a land bank for industrial projects.

The forest patch protected by the Balarampur villagers came into the sights of the State-run Odisha Industrial Infrastructure Development Corporation, the nodal agency for facilitating land for industries. The Dhenkanal district administration started the process of changing the land’s classification. The villagers raised objections, fearing for the forest they have nurtured over decades. The administration paid little heed to their objections, saying that since Balarampur village possessed more than the minimum requirement of 5% of common land, any surplus land could be diverted to other purposes. “This is a criminal act if the government perpetrates it,” said Sushanta Kumar Dhala, Secretary, Balarampur Gramya Parichalana Parishad (BGPP). “There are very few dense forests left in India which are not in the direct control of the forest department. The government plans to raze everything to the ground, ignoring the tears and sweat that have gone into converting a bushy patch into luxuriant forest.” When the pleas of villagers to drop the proposal for land acquisition fell on deaf ears, BGPP knocked on the doors of the Orissa High Court last year. The court has since sought a status report from the administration.

Chintamani Sethi, a village elder, recalls a time when rampant tree-felling left many forestlands denuded in the region. At that time, in 1972, Balarampur villagers resolved to protect and regenerate this forest patch, which fell within the village jurisdiction. Stringent by-laws were framed and villagers readily agreed to abide by them.

Not a single branch was allowed to be cut without the permission of village committee. A small patch was identified by the villagers to meet their firewood needs. In an emergency, such as when wood was required for a funeral pyre or for construction of a house, the committee would allow a single, suitable tree to be cut.

After 40 years of such diligent protection, says Dhala, the patch has not only become dense sal forest, it has also turned into a corridor for wild elephants.

On November 7, Chief Minister Naveen Patnaik remotely inaugurated a ₹102 crore brewery project to be established by P&A Bottles. The project requires 12 acres of forest land. Villagers fear that it means a loss of nearly 5,000 trees. A groundbreaking function was carried out in the presence of police. But Balarampur’s women did not let the administration take possession of the land. They physically hugged the trees and prevented anyone from entering the patch.

“Forest land is being diverted for non-forest use without prior approval of the Centre. It violates the provisions of Section 2 of the Forest (Conservation) Act 1980,” says Sankar Pani, the legal counsel for the villagers at the National Green Tribunal.

But Chaturi is clear. “Whatever may be the outcome of the legal battle, we, the women of Balarampur, are determined not to let anybody touch our trees. We cannot stay mute spectators when our trees are plundered in front of us,” she says. No officer from the Dhenkanal district administration was available to comment on the issue.