By Mari Marcel Thekaekara on Mar. 29, 2015 in Environment and Ecology 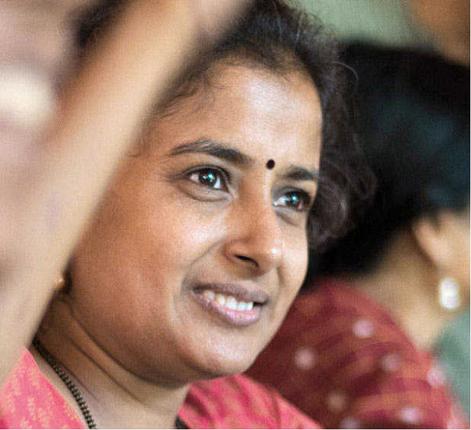 At Vikalp Sangam, everyone has a story. Mari Marcel Thekaekara is impressed with the impact their ideas make on society.

Hope in the midst of despair? Pick up any newspaper. The headlines shout corruption, scams, war, the horrific ISIS beheadings, Boko Haram abductions, rape. So news about a Vikalp Sangam, a confluence of alternative ideas wasn’t seriously exciting. Yet another NGO talk-shop? Been there, done that.

But Ashish Kothari of Kalpavriksh insisted this was different. “I got fed up of the system-bashing at NGO conferences. Everybody has criticisms. Few offer solutions. That’s how the Vikalp Sangam idea emerged. People gather to share their alternatives even if it’s only an idea. We focus on alternatives, not experts or organisations. On sharing, not lecturing.”

I arrived in a cynical mode, but left refreshingly recharged by the initiatives I saw; people, young and old, working passionately for causes they believe in. It was vibrant because everyone came with a positive pitch. To talk about . Instead of moaning about the toxic effect of pesticides, groups were working on organic gardens. Reviving traditional millets, helping children respect and revel in old systems of organic farming, and appreciate ancient knowledge.

Vikalp Sangam’s intention was to bring together stories of hope from different sectors. The main themes centred around politics and democracy, economics, culture and knowledge, social justice and, of course, ecological sustainability. The discussions focussed on these pillars for a future saner society. Everyone had a story to share, everyone wanted to hear new ideas.

It was an eclectic mix of old and young; of Adivasis and a person with a disability; of ReStore, an upmarket organic shop in Chennai, and Just Change, a cooperative of producers, consumers and, uniquely, investors. The list goes on. Just the presence of Shankari, a transgender, was a revelation to many people. Nilgiri Adivasis taught urban folk about the Forest Rights Act, while veteran organic farmers taught young 20-somethings about growing their own food.

Perhaps most promising was the ‘fish bowl’ session where anyone seeking or offering collaboration stepped into the middle and invited potential collaborators to discuss taking their ideas forward together. There isn’t space to do justice to all the innovative projects and ideas, but here are a few.

As Kothari, the prime mover behind Vikalp Sangam, concluded, “We hope that it is a step towards a saner society.”

Rajiv from Chennai arrived in a wheelchair with a carer. He radically altered every person’s understanding of disability. “What did you eat?” “Did you cook it?” “Did you stitch the shirt you wear?” The answers were, predictably, negative. “So you are dependent. Then why is my dependence such an issue?” You could see the shock on every face.

Former panchayat president Elango realised that poverty persists though people work from dawn to dusk. All the money generated in villages leaches out. This, he decided, had to be reversed. “So rather than bothering about poverty, I focussed on bringing back wealth to our villages.” The villagers produced and traded paddy, toor dal, groundnut oil, soap and myriad other locally required products. The end result was an increase in prosperity, a boost in self-reliance. Elango dreamed of taking incomes up from the prevailing Rs.2,600 a month to Rs.6,000. In early 2015, incomes peaked at around Rs.15-20,000 per family per month.

We despair of finding solutions to our mountains of garbage yet waste management expert, Srinivasan, solves thousands of garbage problems through his Zero Waste Management strategy. He offered training to groups in Tamil Nadu to clean up their talukas. His presentation attracted many local groups eager to introduce his expertise to their districts. There was an air of determination. They wanted action not empty promises. Srinivas also offers native cattle-breeding programme and rooftop garden training.

A northern lass speaking Tamil like a native overturns the stereotype completely. Like the Israelis, Bombay-bred architect Meenakshi transformed an arid desert-like wasteland with an eight-year regeneration programme. Rooting herself in Dharmapuri, she started the Puvidham School. Her curriculum is based on farming, earth construction and craft work, with a hostel for migrants’ children. She also practises and teaches alternative medicine. A brave venture in hot, dry Dharmapuri.

From aeronautical engineering to organic farming? An unlikely leap. But Parameshwaran from Oddanchatram is an extraordinary lad. “I realised farmers were controlled by seed, fertiliser and pesticide companies. I had the luck to study at the famous Nammalwar Organic School. I learnt about seeds, planting organically. Someone requested some seeds. I obliged. Then I posted “I have these seeds” on Facebook. News spread. Many people have land and money but know nothing about cultivation. Increasingly, people want organic food. With 400 sq.ft of land, your family’s vegetable supply can be assured. I want to spread this idea across Tamil Nadu and am working towards that.”

Sujatha Padmanabhan, one of the forces behind Vikalp Sangam, brought experiences from Ladakh. “We developed primary textbooks for Leh district. Ludicrously, textbooks had no connection to the life experience of Leh children. They exhorted the kids to ‘save electricity, switch off fans, turn off taps, cross roads safely’. There are no fans, taps or roads there. Wildlife education was about tiger, peacock, lion; not Ladakh wildlife. So we developed relevant textbooks: Life in a farming village, How to keep your house warm (build to retain heat)… We’ve been developing local curriculum in the Andamans, Kutch, Ladakh, Karnataka Adivasi schools. National curriculum will soon include localisation, but we’re not sure when.”

Sangeetha Sriram, a key organiser of the Tamil Nadu Vikalp, is the founding member of ReStore, an organic shop in Chennai aiming to restore health through nature. Sangeetha says, “ReStore is a collective that provides a platform for people interested in sustainable and holistic living. It tries to bring producers, consumers and traders into one tight-knit community.”

Sankari and Shakthi represented Nirangal, an organisation working for gender/sexual minorities (lesbian, gay, bisexual and transgender), and sex workers rights. They explained how different groups face different kinds of violence. Transgender sex workers are harassed both by the police and goondas, while lesbians and transgenders face violence from their own families because of patriarchal attitudes. They argued that while forced sex work is a crime, doing sex work voluntarily should not be criminalised.

Read a report on the Vikalp Sangam gathering at Madurai.

One response to “What an idea!”