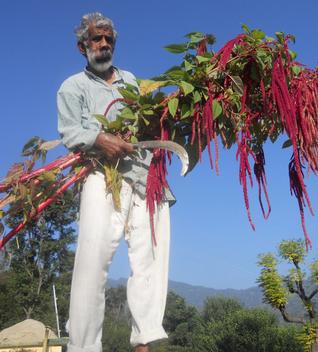 Jardhar village comprises of nearly 26 small hamlets in Uttarakhand. Like hundreds of villages in the country agriculture is a major occupation here.

But the village is known for more than just agriculture. It houses some of the country’s best and ‘lost’ ancient seed varieties.

This is thanks to Mr. Vijay Jardhari, a small farmer and founder of seed saving movement called Beej Bachao Andolan (seed savers movement), who has managed to save some hundreds of ancient seeds from different crops till date.

Presently, in his collection are about 350 varieties of paddy, eight varieties of wheat, four of barley, 220 varieties of kidney beans (rajma), eight of cowpea and 12 varieties of navrangi dhal. His unique seed saving movement is a big hit in the region.

The farmer is also credited with discovering an old tradition in Uttarakhand called Barahnaja (also called Bara anaaj in some places) meaning 12 grains/seeds.

Some of these are resistant to droughts, floods and pests, thus ensuring some output even at times of major distress or natural calamity.

“As a practice, after these 12 Barahnaja is harvested, the fields are left fallow for sometime and then rice or barnyard millet is grown. After this wheat is sown and the same procedure is repeated Thus a proper crop rotation is ensured,” says Mr. Jardhari.

But how did he get interested in this seed saving protection issues?

“I was into chemical farming initially and the yield did increase. But I was able to notice that the soil fertility was decreasing in the second year itself. This high intensive farming and the input costs can only go up gradually and not scale down.

“During the third year I found that the seeds planted from the previous harvest did not yield well and I harvested only a small quantity for seed requirement. These were hybrid seeds designed to break the chain of cultivation that has come through to us for hundreds of years,” he says. The village elders and his father seem to have admonished him for using new hybrid seeds because there were so many varieties of paddy and other crops once, where as now it is the same hybrid rice or wheat.

“This opened my eyes,” he says and he started going around the whole region in search of finding and collecting traditional seeds. He met several people in various villages trying to find out more about local seeds as well as older practices.

“The modern agricultural cartel, in their intention to corporatise agriculture pushed for mono crops, mostly non food crop that were totally alien to this part. That is how, in these parts they pushed for Soya.

“So we had to jump in again to the rescue of farmers. We asked the government as to who will process the bean into oil or milk? And for whom was the rich protein and cash they were drumming about.

“The farmers, after selling these to the rich far-away markets, had to buy low quality ones from the open market which were not cheap.

“So our save our seed campaign caught up with and farmers and farming was saved and old traditional seeds and practices returned including this Barahnaja,” says Mr. Vijay, with a smile of pride.

Today Mr. Vijay has not only been able to change the mindset of people in Uttarakhand but also of the Government.

The agricultural department professes about his Barahnaja system which is being popularised all over the region. Persons like Mr. Vijay Jardhari hold much promise for better agricultural practices in today’s fast eroding farming sector.

First Published in The Hindu

Watch a video on the subject – Baranaja : Twelve Seeds of Sustainability by Project Survival Media.

A post on the open letter to the Prime Minister by Shri. Vijayji Jardhari (above) by Shiba Desor. (checked on 24 Sep. 2015)

The Statesman published an article ‘A Battle to Preserve Seeds‘ on Vijay Jardhari, in Aug. 2018