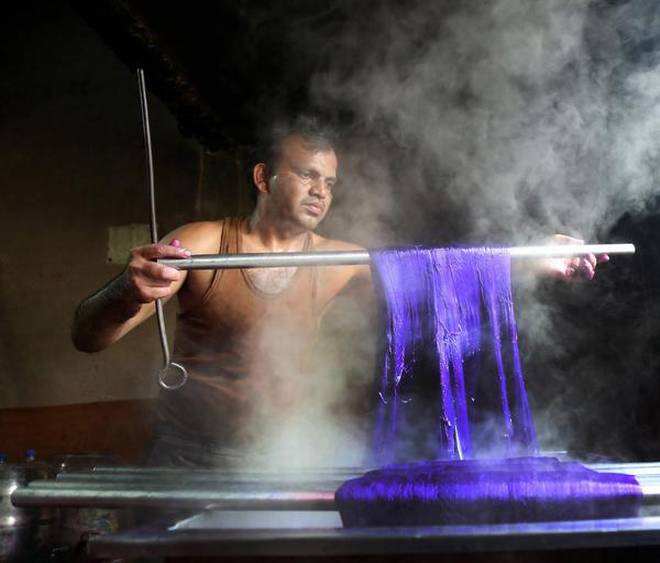 A small town carries forward a 200-year-old tradition of sari weaving. But the weavers wantto move on now

It is 8 a.m. and I am on a street lined with tiny stalls selling flower garlands and sugar candy outside the Sai Baba Sansthan Temple complex in Shirdi, Maharashtra. I have finished my darshan , bought myself two cups of ruby red pomegranate seeds, and it is time to Google ‘things to see around Shirdi’. I get 18,00,000 results in 0.73 seconds — but not one of them is about Yeola.

I learn about Yeola from Raju, a waiter in my hotel. It is his hometown, a place from where “even Madhuri Dixit has bought saris,” says Raju.

I hire a taxi, and as it hurtles past fields and small eateries, the driver educates me a little more about the history of the town, founded in the late 17th century by Raghujibaba Patil who moved here with families of master weavers. “Tatya Tope (a leader of the 1857 revolt) was born there,” he says, his eyes proud as he looks at me through the rearview mirror.

Yeola is dotted with old havelis that jostle for space with new buildings. Everywhere there are little boys and girls playfully darting across the tiny lanes.

A frond of leaves

This sleepy town happens to be one of Maharashtra’s biggest handloom centres, known particularly for its richly motifed silk-and-gold Paithani saris — part of a 200-year-old weaving tradition patronised by the Peshwas. The 2,300 looms in Yeola reportedly outnumber those in Paithan village, the birthplace of the Paithani sari. Integral to the traditional trousseau of a Maharashtrian bride, the saris are named after the motifs on them: tota-maina (parrot and mynah),asavali (flower and vine) and narli (coconut). The Ajanta cave paintings are a visible source of influence on them: the lotus, a frond of leaves and so on. But the most classic motif on a traditional Paithani is the peacock.

I head to Soni Paithani, one of the oldest shops in the town. It is a gorgeous old haveli with wooden rafters, columns and a cool stone floor. The rows and rows of footwear in the verandah give me a sense of just how many customers are inside: business is good, clearly. The owner, Shrinivas Soni, is the sixth generation of a family of Paithani textile traders. He tells me that his “ dadaji ke dadaji ke dadaji ” migrated from Rajasthan to Pune, but his businesses failed, and he moved to Mumbai where he learned the ropes of the textile trade. He noticed the demand for Paithani saris and decided to set up shop here in 1857. He supplied these saris to Mumbai, Pune and Nashik, just as the Soni family does today.

Saris for the stars

“We supplied saris for Madhuri Dixit and Aishwarya Rai in Devdas ,” says Soni. His four brothers and their children are engineering graduates or chartered accountants, but this is their staple business. Soni’s is one of 40 or 50 Paithani shops in Yeola.

The silks gleam under the warm yellow lights; the price tags range from Rs. 6,000 to Rs. 5 lakh. As I watch, Soni drapes the sari over his shoulder and points to the many details on it. The buyers look suitably bedazzled.

It takes an entire community to make one sari. Silk yarns come from suppliers in Bengaluru’s Chickpet; it is dyed by the Rangaris, who have traditional knowledge about indigenous dyes. Some 20,000 weavers live in the town and its neighbouring village, Nagde. They work on either the traditional pit loom or the more newly-introduced frame loom. In the former, the heavy wooden loom sits inside a three-feet pit and the weaver sits on the edge with his legs inside. He pedals continuously as his fingers move the shuttle back and forth with practised ease.

Shirish Patil is a seventh-generation weaver. In a dimly-lit hallway of his long and narrow house are nine looms. I can barely hear him over the clatter. Patil tells me he has a Master’s in commerce and desperately wants to move out of weaving but his family needs the extra hands. The cost of silk yarn is rocketing, Patil tells me, currently at Rs. 5,000 for a kilo. A sari needs at least one kilo of yarn. “A basic sari costs Rs. 6,000 so there isn’t much profit there,” he says. His brother is at one of the looms working on a parrot green piece. In a month, the family weaves an average of nine saris, the more intricate ones fetching higher prices. Patil’s son comes in with his mother. What about him, I ask. “We will not let him get into this trade,” he replies. “Who wants to sit in a pit the rest of his life?”

Yet, amid their aspirations and hopes for a new life, families like Patil’s are keeping alive a centuries-old legacy, while innovating to keep pace with changing tastes.

(The freelance writer believes that everything has a story waiting to be told.)