In line with its project to earn the tag of ‘solar city’ for the New Delhi area of the national capital, NDMC has now drawn up a detailed plan for rooftop solar energy generation. 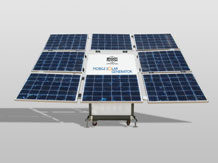 New Delhi Municipal Council (NDMC) has identified 40 buildings in the area under its jurisdiction for installation of rooftop solar panels, its chairperson Jalaj Shrivastava has said.

“We selected our own buildings for the pilot project as we did not require NOC for that from any agency. We will implement it in other government and private buildings based on the response,” said an NDMC official.

According to a proposal, NDMC will appoint an operator to identify, design, erect, install, test, and commission rooftop solar units as defined by the Union Ministry of New and Renewable Energy.

NDMC has already invited tenders for the same.

The civic agency’s area was in February selected as one of the first townships nominated to be a ‘Solar City’ after the New and Renewable Energy Ministry gave its in-principle approval for the same.

After the installation of the solar rooftops, New Delhi would become the second solar city in the country after Chandigarh.

According to an MoU signed between NDMC and Solar Energy Corporation of India, the civic body should meet at least five per cent of its total energy consumption needs through solar energy.

The plan says that NDMC will procure all the solar power generated by the operator and inject into the NDMC grid on the basis of rates determined by Delhi Electricity Regulatory Commission (DERC).

With the residents of the national capital grappling with an acute power crisis, NDMC officials believe the plan will go some way towards solving the energy crisis in the city.

On an average, the NDMC area consumes a daily 350 MVA electricity during summer and 150 MVA during winter.

In an effort to ease the power situation, the civic body is also contributing 16MW of electricity to 8,000 households in the city by generating power using solid waste as fuel at a ‘Waste To Energy’ plant on NDMC land in Okhla.