The champion of housing for the poor is urging greater compassion

The winner of architecture’s “Nobel prize”, Balkrishna Doshi, has called on his profession to rethink the way it approaches building for the most impoverished communities.

The internationally noted champion of housing for India’s poor, Doshi was awarded the Pritzker prize last week, in large part for the Aranya low-cost housing project. It accommodates 80,000 people with houses and courtyards linked by a maze of pathways in the city of Indore.

A celebrity in India where he speaks to packed lectures, 90-year-old Doshi, who studied under Le Corbusier, has worked on other projects – including mixed-income housing for a life insurance corporation in Ahmedabad and the underground Amdavad ni Gufa art gallery – but it is Aranya for which he is best known.

Speaking to the Guardian after the announcement of his award, Doshi said that architects and urban planners involved in low-income housing projects – as well as architectural education – needed to move away from their focus on the designer as individual to being far more collaborative, compassionate and invested in the dignity of those they house.

And in the chequered history of slum clearance and relocation – including in the US after Roosevelt’s New Deal, and in countries like France and the UK in the post-war era – Doshi’s Aranya stands out as a success story in a country with substantial and persisting housing issues for its poorest citizens. 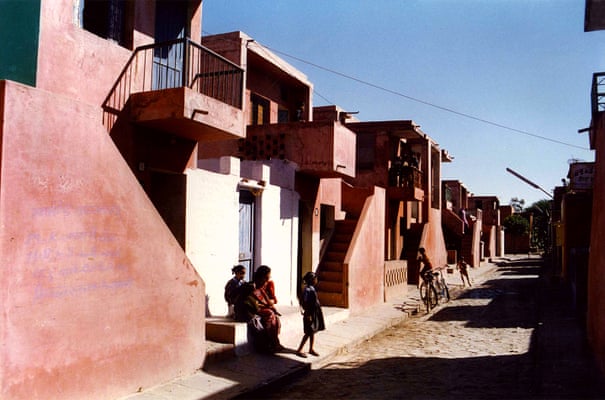 “They are not houses but homes where a happy community lives. That is what finally matters,” Doshi has said in the past of the organising credo for this project.

Doshi believes that a large part of Aranya’s success has been because instead of presenting those who would live there – often in a purpose-built house for the first time – with a ready-made design, the development allows residents the space and opportunity to adapt and improve their homes.

Built around a central spine to accommodate businesses, Doshi’s brick houses – in sizes from a single room to larger homes for wealthier families – were designed around parks and courtyards, with groups of ten houses forming inward-looking clusters.

Beyond aesthetics, Doshi argued that architecture and urban design – done right – can and should be socially transformative for the world’s poorest.

“If you empower people then what happens is that it creates incentives for people that are self-generated. The promise of a home is not a limited hope, but the sky becomes the limit.”

If at times Doshi speaks more like a humanist philosopher than a designer, it is an outlook that was explicitly recognised by the prize committee that “projects must go beyond the functional to connect with the human spirit through poetic and philosophical underpinnings”.

“Housing as shelter is but one aspect of these projects,” the Pritzker jury added in its citation.

“The entire planning of the community, the scale, the creation of public, semi-public and private spaces are a testament to his understanding of how cities work and the importance of the urban design.”

Echoing that theme, Doshi added: “As architects we are supposed to be social, economic and cultural designers. But really we are exclusive when we need to be inclusive.”

“If I as an architect am not able to do something for my people and provide them with what they need, then I should say my job is incomplete.”

For Doshi that has not only meant designing places like Aranya to replace slum housing but to have the curiosity and humility to learn from slums, not least how and why a successful sense of community coalesces, even in situations of extreme hardship. “I used take students to slum areas. When you talk to the people living there they are lot more open and willing to share and modify because the human being is basically a compassionate animal.

“In Bombay,” he added, “we have a large slum near the airport. When we were studying you could see that besides the situation of living there in absolute misery, people were also willing to challenge themselves to find a better way of life, and seeking to overcome the problems.”

The balance, for Doshi, is a subtle combination of factors including access to the “essentials” of life – shops, cafes and places to do business – with the housing maintaining crucial “privacies” while leaving room for cooperative communities to develop through their own negotiations.

“That means borders that are diffuse. What you need to find is how to create not separations but buffer zones, places where there is room for variation.” Doshi said he found such models in Indian temples and old cities.

“You want slight shifts – to create gaps – because architecture is not mechanical.”

Instead Doshi sees communities and the physical places that they live as “organic” and “messy” and inevitably adapting what the architect has designed.

Commenting on the importance of the award for India, Alok Ranjan, Jaipur-based professor and member of the Indian Institute of Architects, told AFP last week: “This is very good news for Indian architects because he is our godfather. We are very proud.

“What stands out about his work is that it is for all strata of society … not only for the elite but also for the middle- and low-income groups.”

See chapter 4.1 (pages 22 to 34) of the paper Social Sustainability through Neighbourhood design for a case study of ‘Aranya’ (checked on 10 Oct. 2019)