Dusk fell slowly on the sprawling grounds of IGNCA (Indira Gandhi National Centre for the Arts) in New Delhi as Godfrey Duncan, a British storyteller of Guyanese origin, began his story — from, of all sources, the Vikram and Betaal series. He was performing at the eighth edition of the two-day Kathakar: International Storytellers Festival that concluded last Sunday. As the audience reacted enthusiastically, it was easy to see why this story — about a delicate prince’s search for an ideal wife — brooks no barrier of language or culture in its telling. Perhaps each member of the audience found something familiar in the tale packed with death, greed, love, hate and sex. “Everywhere in the world, stories are a precursor to formal education,” Duncan said. “And they are seeing a revival everywhere in the world.” Duncan has a theory as to why storytelling and related arts like puppetry are getting popular again. “Those of us who grew up in the 20th century had grandparents who told us stories. A lot of learning for kids now happens through the digital medium. So parents are keen to give children a sense of earth through stories,” he says.

Geeta Ramanujam, who runs the storytelling academy Kathalaya in Bengaluru and has been practising the art for some 40 years now, would agree. Stories of nature are what she specialises in: if you watch her narrating tales — sometimes modulating her voice, sometimes gesturing with her hands — you will begin to see moving images before your eyes: the bird that yearned for the mountains and flew there to die fulfilled, or the mewling kitten and woofing puppy who have to part ways because of genetic enmity. She tells stories from the Jatakas, Panchantantra, but also tales of the everyday that are rooted in nature.

Heart of the story

“We have lost the art of listening,” Ramanujam says. She talks of traditional storytellers travelling from village to village narrating the Ramayana or the Harikatha in the past: “People who listened to the Ramayana slept peacefully. Life was less complicated those days. All that has been lost, especially with the coming of social media,” she says. Perhaps it is the silence at the heart of a story that has been the first casualty of the persistent ring of the mobile phone.

Every year, new storytellers emerge from Kathalaya and, in turn, give new forms to the art, often embellishing it with theatre, songs, sound effects, visuals. But Ramanujam is sceptical of such experimentation. “Theatre is just that, while storytelling is about transmitting the core of the story. We have to ask whether we just want to draw crowds or whether the art has a purpose beyond that.”

Her stories try to touch the art at its origin in communication and communion, both of which have been eroded in this age of disembodied exchanges on social media.

And yet some storytellers are using just that — social media — to reach out to a larger audience. Sarla Minni, better known as Kahaniwali Nani, also from Bengaluru, posts her stories for children on WhatsApp, and recently, on Telegram, because her WhatsApp account had crashed. Minni started her venture because she wanted to draw children away from the flickering screen. So her posts have no animation, no sound effects — just the good old story with a moral, simply told. But social media helps carry her voice to far-flung corners, beyond the ring of grandchildren gathered around the archetypal granny’s feet. She says, “Parents from some remote border area got back to me saying their children wait for the flickering Internet connection to be restored so they can listen to Nani.” Many of these children cannot attend school regularly because of political disturbances: Nani’s tales teach them grammar, punctuation, and morals. 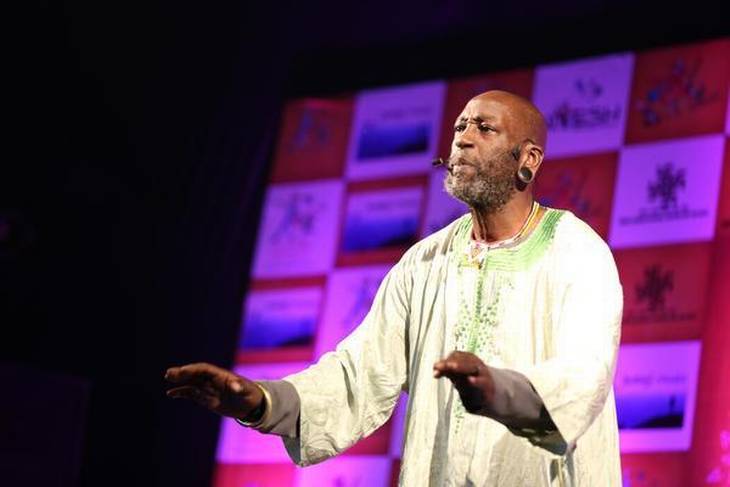 Indeed, instilling values has always been one of the primary functions of stories: it survives today in some forms, such as the ‘Phad Banchhna’ or “telling” a canvas, an art form popular in and around Bhilwara in Rajasthan. Similar to the ‘Pats’ of Bengal, the phad is a long piece of cloth or canvas painted with images of folk deities, mostly Pabuji and Devnarayan. As the narrator — called bhopa or bhopi, if it is a woman — unfurls the scroll bit by bit, he also explains the ways of the gods to men for their edification.

The bhopas are a must at marriages and festivals. So Phad artist Kalyan Joshi brought the old and frail Sadhuram to Delhi to tell the story of Devnarayan. There is a symbiotic relationship between the bhopa, the storyteller, and the Phad artist: one is incomplete without the other.

“There is a big market for the composite art that the Phad represents. Gujjars, the rich landed caste, were our traditional rural patrons. But now we get called by all sorts of people and have moved on to other stories and themes as well,” says Joshi, whose father Shrilal was a Padma awardee. “A good bhopa with a strong throat and a grip over the nine rasas can hold the attention of the audience over a week.”

The deep baritone of Neelesh Misra, who hosts the popular radio show Yaadon ka Idiot Box, has the magic that Joshi refers to. The protagonists of his stories, written by people from all over India and covering a wide range of subjects from romance to horror, are men and women like you and me, rather than omniscient gods.

The ‘hero’ of the story, ‘Hazaron Khwaishe Aisi’, narrated by Misra, is a down-at-heel young Santosh, whose one grievance is that none of his wishes has ever been fulfilled, till wonderful things suddenly start happening to him. Misra creates a world that is the opposite of fabulous, and therein lies their appeal. You will immediately see yourself in Santosh, who peels potatoes for dinner in his gloomy chawl even as he dreams of “ghar, gari, badia suit” and of his tele-caller ladylove, Gita.

Stories such as Misra’s exist side by side with something like the ‘powda’, Marathi ballads celebrating heroic exploits, mostly of Shivaji. The composer-singers are called shahirs. Adinath Vibhute, who attended the Kathakar event, is one. Wearing the long ‘choga’ and ‘pagdi’ typical of the shahirs, he said he has been singing paeans to Shivaji for as long as he can remember, having learnt it from his forefathers.

To adapt it to the times, the powda has been given a modern twist. “We now use the powda to tell all kinds of stories, even to create awareness about malaria and caste discrimination as part of government campaigns. They (administrators) know that our voice will always be heard,” says Vibhute with pride. In a further modern twist, you can hear the powda sung by artists on YouTube: and the channels get millions of ‘likes’.

One of the oldest storytelling forms to survive is the Pandavani: stories from the Mahabharata. Ritu Verma, the only name widely known in the field apart from Teejan Bai, has a massive following in Chhattisgarh. “In season — Navratri, Ganesh Chaturthi — we are travelling all the time but I wish more people would turn up to hear us in other cities,” she said at Kathakar, where she performed.

Pandavani might have a limited audience in urban areas, but another traditional form that never fails to draw a packed house, especially in the Hindi- and Urdu-speaking pockets of India, is Dastangoi, the art of elegantly embellished and interpretative storytelling. It returned to Delhi in 2005 after decades of near-extinction. Brought back to life by Mahmood Farooqui, its popularity has been growing wildly ever since.

Moving out of its core of fantastical stories from the Tilism-e-Hoshruba, a Persian epic narrative about the adventures of fictional hero Emir Hamzai, it now encompasses modern literary works — from those of Manto to Vijaydan Detha to Shrilal Shukla. Its spin-off form, Qissagoi, that brings music and drama into storytelling, is being nurtured by actor Danish Hussain, who performed at the festival this year. His no-frills, no-prop performance presented Urdu Ki Akhri Kitab by the Pakistani satirist of Indian origin, Ibn-e-Insha.

The composite form that storytelling has now become finds one of its most flamboyant expressions in the performances of #FOAF (foundonallfours), a storytelling collective based in Delhi. Its founder, Anoop Chugh, describes it as “the business of gatecrashing into people’s living rooms to narrate stories from far and wide.” They work by finding a host who will let them hold a storytelling event at their home for a few hours. “In the past year or so, as many as 32 hosts have invited us to their living rooms across seven cities and villages and every single time we have created six hours of stories,” says Chugh. They go beyond the spoken word to tell stories through verses, beats, expressions, chords, fire-spinning, headstands, and films.

Recently, they held a performance in the mustard fields of Punjab, in a village called Aloona Tola, where they did a poetry slam, a drum circle, a nukkad natak, rap battle, b-boying and fire-spinning while volunteers and artists created wall-art in the background. Given their ‘urban cool’ factor, you might think they are the ‘social media’ types, but Chugh protests, saying, “I created this community to distract people from their mobile phones. I wanted people to meet face to face and narrate stories the way our grandfathers would do, sitting under a tree. No technology, no media, no microphones, no amps.”

In an acknowledged irony, they do use social media to get what Chugh calls “the right crowd” to their gatherings. “I especially love the way technology lets us connect with thousands of artists who then come to perform at our gatherings. Also, we find a lot of our hosts through social media.”

The common thread for the generation next of storytellers seems to be this love-hate relationship with social media. The director of Mumbai-based Tall Tales, Akshay G., says: “We believe the magic of a live show cannot be captured on camera; we prefer people to watch our stories live and talk to the storyteller afterwards. We leverage social media for marketing, but the bulk of our advertisement is word-of-mouth.”

The collective runs live shows, where participants tell real-life stories without any accompaniment.

The best of their performances can be found on their YouTube channel, but as Akshay explains, this is more for documentation. He believes in taking storytelling back to its primary aim — communication sans mediation.

In February this year, a story that received standing ovation was ‘Unspoken’, told by Shiromi Chaturvedi at Mumbai’s The Cuckoo Club (available on YouTube). Chaturvedi tells a gut-twisting story of the sexual abuse she endured inside her home for 12 long years without her parents knowing of it. She speaks clearly, without sentimentality, but at the same time refusing to obfuscate unpalatable facts — such as the perpetrator forcing himself on her even during her period days, or having sex with her while bhajans played in the background.

Later, a “close friend” told her she must not share her story since no man who heard it would be able to love her. That’s when Chaturvedi decided to do just the opposite. She began to tell her story to the world. When you listen to her, it’s gut-wrenching but also mind-altering. And you experience deep fellowship. That is the enduring power of stories.

(With inputs from Malini Nair in New Delhi.)