‘If anything engages me, it is a sense of wonder’ 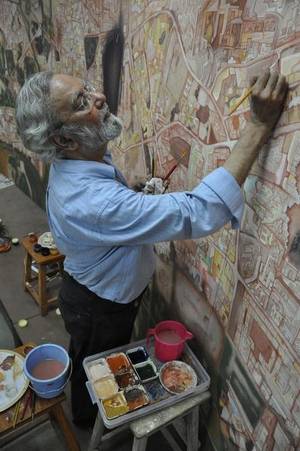 In conversation with artist Gulammohammed Sheikh, as he muses on stories and memories.

Painter, poet, critic and teacher, Gulammohammed Sheikh has reigned as one of India’s most important contemporary artists for over four decades now. Sheikh, who firmly established the modern narrative tradition on Indian canvasses, uses dialogue and memory as twin ploys to evoke new imaginings of the world around us. Excerpts from a telephone interview a week before he speaks at The Hindu Lit for Life 2017:

You famously used your mother’s photo to tell a larger, universal story. How does this process of amplification work for you?

The painting refers to my time spent in Surendranagar, where I was born. The painting ‘Returning Home after a Long Absence’ made years later was based on a photo of my mother I had taken. That work provided an opportunity to examine the context of the small town where I grew up. I combined the image of my mother with several other images quoted from different traditions and combined it with some images I construed myself. Later, I also invoked image of townships in a painting (‘Speechless City’, 1975-77) I made during the Emergency, which had political dimensions. Subsequently, in the late 70s-early 80s, I began to explore the city of Baroda where we had made our home. For instance, ‘City for Sale’ (1981-84), which deals with the communal situation. Eventually, I began to expand the idea of the city into larger spaces. Finally, as it developed, the map of the city turned into the map of the region, and then the map of the world.

And then began your Mappa Mundi series. But here the universal shrinks into the private, doesn’t it?

Yes. I continued to use a physical map of the city of Baroda construed through Google Earth and then painted. So in a way, the city becomes a map of the world we live in. The personal and the universal go back and forth in all these works.

Where does your interest in geopolitical history as inspiration spring from?

I grew up in Nehruvian times, in the 50s, during my adolescence. I learnt about Gandhi from school textbooks. Nehruvian politics presented the idea of the secular, which we imbibed, but the terrible riots of 1969 in Gujarat made me aware of what lay beneath the layer of secularism; it was a porous layer through which we saw there was a divide. The divide erupted in front of our eyes and that made me aware of the political issues. Then my friend Vivan Sundaram returned from abroad with Left ideologies and we had a lot of dialogues and that made me aware of current politics. And these resulted in sets of paintings that directly refer to politics, like ‘Man II’ (1972) and ‘Speechless City’.

The kaavad is basically a simple storytelling device used by religious itinerants, but you cram it with legends, politics and personalities in a rich mix that breaks the boundaries between personal and political, religious and secular, native and foreign. Why did you pick the kaavad for this brand of, shall we say, riotous storytelling?

Well, our country is full of storytelling traditions, and kaavad is one of them. I picked up the kaavad after making a series of ‘accordion-format’ books (both painted and digitally construed) as an extension of the book. And, indeed, a smaller kaavad has doors the size of a page, which can be opened and closed. Kaavad gave me the chance to make the book three dimensional, because it can be seen from all four sides and can be opened in all directions. And in addition you can put your hand into it. In the traditional kaavad, there is a sanctum in this middle area but in my works, it’s an open space. I made four small kaavads, but also one that was large, eight feet high and twenty-four feet wide. So you could walk through it. In the kaavad there are multiple narratives.

The basic intention was to put many people, contexts, places and ideas together into that, and then develop some sort of interaction between them. These are life-size figures, drawn from different traditions — Indian, Persian, Chinese, Japanese, European; there are Sufis, mystics and sceptics — facing each other. It is the idea of a dialogue, an exchange of ideas. The only way to answer the violence of our times, one hopes, is to initiate dialogue. And perhaps the violence can be redeemed in this way, if at all.

You have spoken of your art as an act of ‘restructured memory’. Can you talk a little bit about how this plays out in your work.

I think all of us, in some way, when we talk about the times we have lived in, we not only revisit but we reinvent memory. Childhood gets reinvented at different periods of your life. It comes through in multiple ways and often as reinvention. I am interested in memory; the idea of memory. Memory comes to you in multiple forms; you don’t remember everything, so you fill in the gaps and in that sense memory gets enriched and reinvented. It is a process, which my work explores.

In your works, the city is both an abyss and a place of hope. Are you simultaneously fascinated and repelled by the modern Indian city?

You have put it in your own words very well. (laughs) I will put it slightly differently. I am interested in the city. I am living in a city. And I have lived in multiple cities and I am constantly amazed by what is happening around me and at the same time, I feel disturbed. Both sensations are simultaneous.

There is strong political and social commentary in your works. How difficult is it for an artist to filter politics through his art?

Firstly, it is not that I only do political themes. But it is a part of your life; you cannot put it aside. Second, I have also done other series, for instance, I made paintings of trees for several years! (laughs) That was exploring the environment in an entirely different way. I was interested in the idea of the tree as a magical presence. Similarly, I explore other things… If there is anything I am most deeply engaged in, it is a sense of wonder. That draws me all the time. You look at the world and you see a lot of misery and violence around you, yet at the same time you find that we combat it. We continue to combat and we wonder how, against those incredible adversities, sometimes small men, people like Gandhi, could stand fearless and combat it.