A clown plus a counsellor makes a Clownselor – meet Sheetal Agarwal, a much-loved Clownselor from Delhi.

The dictionary defines a clown as – “a comic performer, as in a circus, theatrical production, or the like, who wears an outlandish costume and makeup and entertains by pantomiming common situations or actions in exaggerated or ridiculous fashion, by juggling or tumbling…”

Men have been at the forefront of this art over the years, and for everyone, the word clown would mean a man who has donned “the clown” costume.

For a change, let’s meet a woman clown who also is a counsellor, aka Clownselor – Sheetal Agarwal from New Delhi! An amalgamation of a clown and integrating techniques of counselling – gives birth to a Clownselor. Ever smiling, Sheetal is passionate about making a difference to the lives of ailing and or recuperating children on hospital beds and within the hospital’s otherwise dour environment. The spirit of clowning, helps Sheetal get the ailing and recuperating children, the health givers, and the parents caring for the children, to break out into huge big smiles – for that is the moment Sheetal works for. For Sheetal, becoming a clown and then a Clownselor, happened by chance. One of four siblings, Sheetal, originally from Haryana, lived with her family in Nepal. When Sheetal was 10 years old, the family came back to Hissar in Haryana.

With an M.Phil. in Social Anthropology from the University of Delhi and a Masters in Sociology from JNU, New Delhi, Sheetal landed a government job with the India Centre for Migration, under the Ministry of Overseas Indian Affairs.

However, Sheetal realized that the perception of her co-workers and the cosmetic roles assigned to her were way below her capabilities and this was not what she wanted from life. She resigned. Soon, a new door opened, leading her to her passion of becoming a clown and learning to be a Clownselor.

Support systems to be a Clownselor

Sheetal’s family backed her to the hilt. With her brother’s help, she sought permission from the Delhi Government to first begin Clownseling in hospitals. The minister liked the idea and proposed that the activities be launched at the Chacha Nehru Bal Chikitsalaya (CNBC). Based on the response, permission would be granted to cover other hospitals. The first step was in place.

In July 2016, the first intervention took shape. With the help of volunteers, Sheetal began to foray into the hospitals. Along with Sheetal, these volunteers, Ekta Sansi, Khushboo Jain, Ravit Wadhva, Raman Bhatia and Bhavesh Pal, have been the backbone of the interventions. The focus of the intervention is to de-stress ailing children as well as parents, nurses and doctors. With balloons, wigs, a big nose and a big smile painted on their faces, the Clownseling begins from the OPD.

The clowns form a chain, and enter singing and dancing as they use balloons to ease the atmosphere of stress that the patients and caregivers are undergoing. The next stop is the in-patient wards. Generally, a group of three to four clowns enter a room where there are five to seven children recuperating. The clowns then perform plays, use mimes and even engage the parents in a game with balloons. This helps in easing the tension.

On each floor, there is the caregiver’s room. With a two-minute stress buster activity, the clowns help the nurses and doctors to smile and at times relax with a laugh! 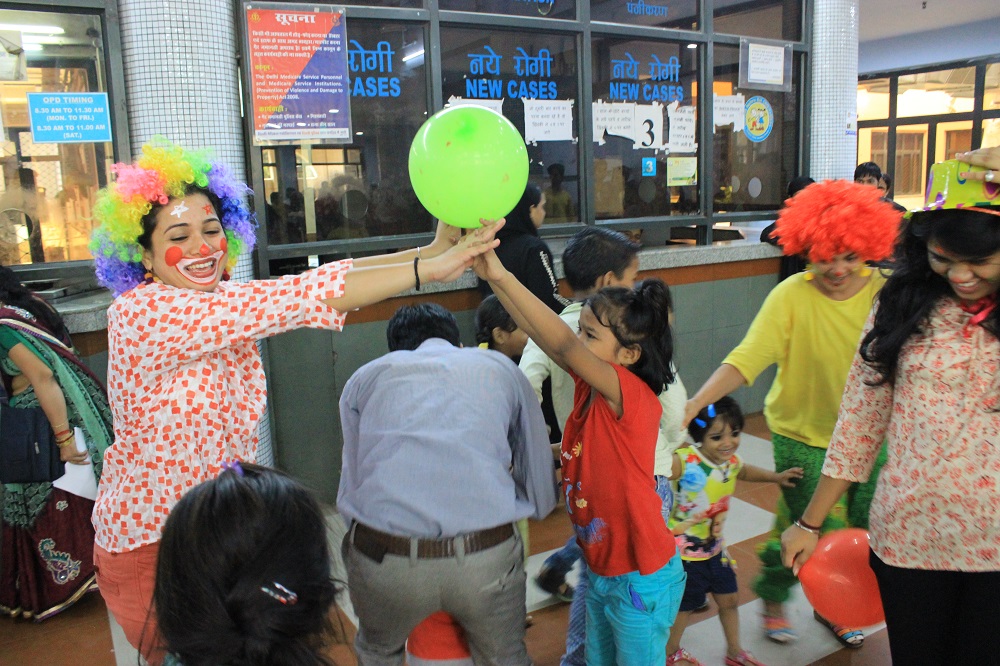 Children, parents and caregivers have responded positively. The director of CNBC introduced the Clownselors to their ex-director and other doctor friends who encouraged and asked the team to visit other hospitals.

At times, doctors have come looking for the Clownselors and directing the team to certain wards or rooms or post-operative sections. Even nurses ask the team to play with specific children who have been ailing for long or are not responding to medication. It is encouraging to see physiotherapists searching for the clowns and taking them to the physiotherapy block.

The best response is from parents who reward the Clownselors for making their children smile.

A place in the hospital’s yearly calendar Clowning was unheard of at CNBC until June 2016. When clowning activity actually began, doctors and staff watched in awe and also participated in the activity with great enthusiasm. Positive feedback was received from the director and the doctors. New Year brought new encouragement. The clowns were featured in the hospital’s yearly calendar. The hospital had recognised the efforts made by the Clownselors’ and their passion to spread smiles. The Clownselors have certain strict rules for themselves. They have a no-touch rule. This helps minimize the risk of an infection (if any) spreading to the ailing children. A no-selfie rule keeps the intervention maintain dignity and identity. Sheetal’s family is yet to fully understand her passion. She takes up teaching assignments as a visiting faculty at various educational institutions. At times, volunteers can’t make it to hospitals and interventions have to be postponed or cancelled. Sheetal is currently exploring ways to cope with these challenges.

However, what truly drives Sheetal and her passion to be a Clownselor, are compliments showered by parents – “our child had not smiled for the last three days, thank you for coming and making our child laugh again.” Or “our child has simply been lying dull for days, not smiling nor talking, but look at this child now – can’t stop giggling. Thank you.”

Sheetal hopes that other hospitals seek out the Clownselors and make their hospitals happier places to recuperate!!