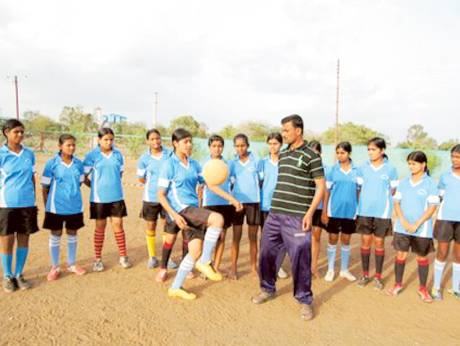 Hailing from a region where child marriage is still practiced even though it was outlawed 80 years ago in India, 17-year-old Rohini Pashte has come a long way from her little of hamlet of Pithori Shirasgaon in Ambad block of Jalna district, Maharashtra.

She has made her village and school proud by getting selected to represent India at the Homeless World Cup Football in Santiago, Chile, to be held from October 19-26 where she will meet, interact and play football with 500 players from 64 countries.

The event uses the power of football to energise homeless people to change their own lives. It supports grass-roots football programmes and social enterprise development via a network of 70 national partners and celebrates its work by organising an annual football tournament.

No girl from Jalna has travelled to South America. Rohini will be the first to make the 14,300-km long journey to Chile, travelling for the first time by plane — something that no one in her family or village had ever dreamt of in their lifetime. The difference between Pithori Shirasgaon and the Chilean capital could not be starker. While Rohini’s village is home to only 2,000 people, Santiago with a 6.3 million population is among the most prosperous cities of Latin America.

It is no mean task to be one of eight youngsters selected from across India but what is significant is how this young girl has journeyed from a life of impoverishment to achieve something special.

“It’s a dream to have reached this level,” she says, to be tossed out of dire poverty and notorious conventions prevalent in the Marathwada region where girls are generally compelled to drop out of school to be married by their 13th birthday. After marriage, many die prematurely during childbirth. Rohini’s elder sister was married at 14, succumbing to a mindset that views girls as a liability with no right to education.

Leading a hand-to-mouth existence, Rohini’s mother, working as a daily wage labourer on other farmers’ fields, took on the mantle of caring for her children after Rohini’s father died some years ago. Working from dawn to dusk and earning a meagre sum of Rs70-100 (Dh4-6) a day, she had little time to pay any attention to her children let alone their education. So Rohini’s grandfather took her brother under his care to educate him while Rohini being a girl was left behind. Her mother made her drop out of school in Grade 4 to work alongside her in the field to sustain themselves.

But Rohini’s zest for school never faded and it was to her luck that one day her uncle mentioned that a new school had opened in Ambad, the Kasturba Gandhi Balika Vidyalaya (KGBV), a government-supported NGO boarding school where education, food, clothing, bedding and medicines are provided free of cost to underprivileged girls from disadvantaged communities.

Her mother was reluctant to send her daughter, around 12 at the time, to a school 30km away as she herself had never set foot outside their village. But when she realised that all the facilities were free, she took a bold step — a step that proved to be a boon for the young girl.

Recalling her initial years, the principal of KGBV, Panchapule Nalavade, told Gulf News over the telephone from Jalna, “Rohini was a simple, shy and reticent girl who was overwhelmed by her surroundings and peers. Our school is run by the Matsyodari Shikshan Sanstha educational institution founded by Ankush Rao Tope focusing on not just education for school dropouts and girls from economically backward families but also motivating them to take up sports.”

And it was in the field of sports that Rohini showed her potential, the principal added.

Her talent and skill for the game was spotted by her coach Rafiq Shaikh who says it took quite some time to instil in her the confidence to play football or do even a simple task such as getting her to wear shorts and T-shirts for the first time. “She was so shy and it would take a lot of cajoling to get her to run along with me and other players,” Shaikh said from Nagpur, where Rohini had gone for a football camp with eight other youngsters selected from across India for the games.

Shaikh encouraged Rohini to participate in every game and introduced her to Radha Shinde, an older student and budding sportsperson. “Radha is like an elder sister to me,” says Rohini. “With her guidance I was able to perform both in the classroom and the playground.”

Initially, Rohini, now studying in the 10th grade, took part in only ‘Kho Kho’ (traditional tag game) and track events. Then when she watched Radha playing football, she felt inspired and followed in her footsteps. Soon Rohini began to excel in the sport that required magic feet. She says, “I love sports so much that I don’t feel like going home during the vacations. I feel like staying back in school to practice.” When she goes to her village, she gathers all the girls together to teach them sports. But her mother chides her, “It doesn’t look nice for girls to be so boisterous and play football.”

But ever since she got selected to play internationally, the mood and mindset towards sports in her village has changed dramatically.

Posters have been put up around the village congratulating Rohini on her success.

She has often participated in inter-school competitions and it was winning at a national event held under the Ministry of Sports and Youth Affairs that Rohini was spotted by a representative of the game organisers who signed her up.