Biodiversity plans go to the grassroots 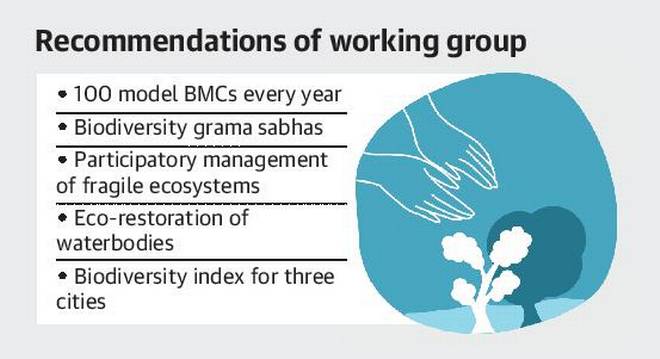 Local bodies in Kerala will soon have a key role in biodiversity management, with the State Planning Board adopting a participatory, bottom-up approach to conservation and sustainable development.

A report of the working group on biodiversity set up by the board has recommended a comprehensive biodiversity strategy and action plan with funding for the 13th Five Year Plan.

The report seeks to develop model BMCs in 100 local bodies every year during the 13th Plan period. It proposes a standing committee and a working group on biodiversity in all panchayats, along with environmental/ biodiversity grama sabhas empowered to clear quarrying, sand-mining, and wetland conversion at the local level.

Preparation of training modules on biodiversity management and skill development programmes for resource persons and stakeholders are among the steps recommended for capacity development of the BMCs.

The report also recommends Access and Benefit Sharing (ABS) as an option for the BMCs to generate revenue.

Vice Chairman of the State Planning Board V.K.Ramachandran said the proposals of the working group would be integrated into the Annual Plan of local bodies.

The report advocates a participatory management system for protection of fragile ecosystems such as hills and mountains, shola forests, laterite hills, mangroves, sacred groves and riparian habitats, and eco restoration of degraded areas like abandoned quarries and ponds.

Mobile apps and crowd sourcing have been recommended for ecosystem mapping. Local bodies have also been tasked with management of invasive species.

“Joint BMCs can function as a very important component of local level participation in biodiversity use and conservation,” says the report.

It stresses the need to complete the inventory of the plant and animal biodiversity and the assessment, monitoring and conservation of threatened species and indigenous breeds in Kerala over the next five years.

The preparation of city biodiversity index for Thirurvananthapuram, Kochi, and Kozhikode, afforestation of public land in urban areas, eco restoration of waterbodies and establishment of biodiversity parks are among the major recommendations of the panel.