I met a man a few months back in a program. In his humbling slippers and a kurta, he looked ordinary. I saw a girl walk past him, turn back, and suddenly scream “Cycle natak??!!” followed by a loud and exuberant exchange of “I am such a fan” and “Thankyou, thanks.”

Months later, I express my wish to interview him and a few weeks into it, finally catch him for one. He modestly apologises for the delay, telling me how electricity is a problem in the village he currently calls home.

Meet Akram Feroze, the man behind “Cycle natak”, the bicycle journey across India, that started on October 27, 2011, and is still going strong, with the then 22 year old Akram, who wanted to take theatre where it was inaccessible. 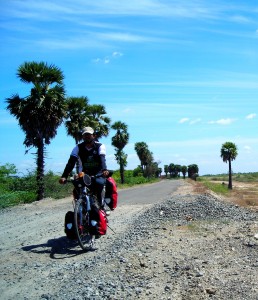 Me : Where are you currently on your journey? Where does it end?

Him : I am hitch-hiking, moving towards Kochi from Jharkhand. For the moment, I have stopped at Khanderbheda, a small village near Jamshedpur, at the foothills of Dalma forest: dry, wild, but peaceful.

I started cycle natak as a 2-3 year tour across the country, but after a single year of travel, I fell in love with the unknown roads and the strangers I met on them. Now, I have decided to live the life of a fakir musafir, who travels and tries to perform theatre wherever possible. Now, it’s a lifelong journey. I sometimes give a break to the cycle and hitchhike, give talks or perform street theatre for various organizations. I don’t see an end to it as such, though I will leave it to the road. One can never guarantee anything cent percent on the road.

Me : What is the essence of cycle natak?

Him : Cycle Natak can simply be described as theatre for the people, of the people and by the people. The man and cycle natak are not different, and the only goal is to travel, learn and share.

Me : You have mentioned the “Natak Mandali” concept in your facebook description. How did it inspire your mission?

Him : I don’t know the real definitions of Natak Mandali. I hail from a small unknown town called Jagtial, of Karimnagar District of Andhra Pradesh, and to be frank, till my 12th, I had never watched a natak. I didn’t study theatre as profession, but my grandfather used to narrate stories of how Mandalis (group of people) used to travel from village to village and perform theatre (natak). That’s how I developed the fantasy of a travelling theatre.

What is my mission? I don’t have one. I had never travelled much out of my town till highschool, and I had the fantasy of seeing life beyond borders. I wanted to experience life in its true sense, freedom is what I sought. Hailing from the middle-class, I could not afford a long trip, so I bought a cycle and a backpack, took 300 rupees and left home. Theatre being my passion, I thought I’ll try and perform wherever possible, and if people give me food I will eat. That’s how I mixed my fantasies of travel and theatre, to come up with Cycle Natak. Me : How do village people respond to you? What impact does cycle natak have on them?

Him : I used to be a complete flop-show when I started. I could not understand the rural audience. Now, however, I am improving with the lessons I learn on the road. Though even now sometimes I cannot get a good response, but at times when the villagers come thanking and gift 10-20 rupees for my performance, it means they found it worthy. Recently, I was performing with the kids in a small village called Mannpur, of Andaman islands, on the issue of drinking, and one of the kid’s father comes and says to me, “I won’t stop drinking but I won’t drink at home.” For me, that kind of a response brings an immense sense of satisfaction.

He chats with me lightheartedly for a while before saying, “I must leave now, got to water the fields tomorrow early morning”, and signs off with a smile.

First published by My Theatre Cafe

You can watch him talk – The Unknown Roads: Akram Feroze at TEDx Master Canteen Square – The Cycle Natak, an story of a young man travelling across India on a cycle learning life and performing theatre on various social issues in
villages.