In A First, Hyderabad Folks Get Organic Food Directly From Farmers in Sangareddy!

By Shawn Sebastian (Edited by Shruti Singhal)onOct. 30, 2018in Environment and Ecology

In a unique initiative pioneered by two grassroots organisations in Hyderabad, where about 100 consumers signed up with small-scale women farmers from the nearby district to produce organic products.

Gone are the days when humans looked after their food requirements in their landholdings. The modern world of the market has left most of us unaware of where our food products come from and who produces them. Consuming the packaged products offered by supermarkets or purchases from unknown sellers in the roadside-markets has become the reality of our consumption pattern.

However, for a group of urban consumers in Hyderabad, there may be a ray of hope to break away from the shackles of the organised market.

Christened ‘ConFarm’ (Consumer-Farmer Compact) and ‘Beyond Organic’, the novel idea is the brainchild of DDS (Deccan Development Society) and Disha Consumers Alliance, two community-level organisations based in Sangareddy and Hyderabad districts. 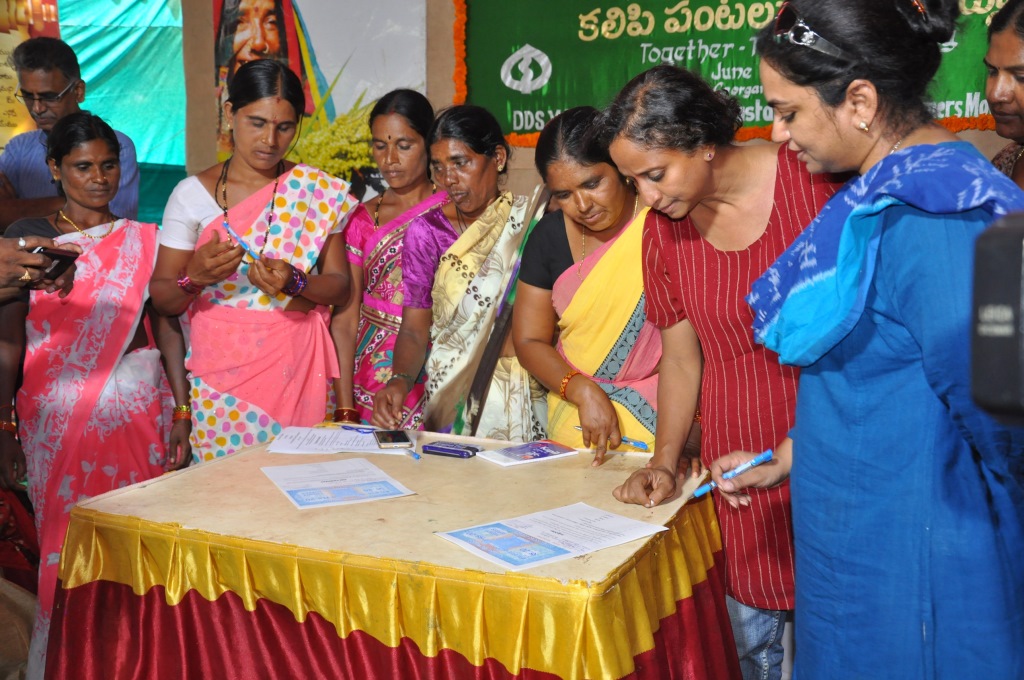 Farmers and consumers sign an agreement as part of the initiative. Photo: Yesu

The idea behind the initiative is for the consumers to support the farmers upfront, at the beginning of a farming season. Each consumer will support a group of farmers with nearly Rs 10,000 per acre for their farming needs. In return, at the time of harvest, consumers would be given products according to the value they have invested–leaving the middlemen out.

Consumers would be provided with millets, pulses, oil, jaggery and other necessary groceries produced organically. The initiative is also aimed at giving millets a push in the urban market, enabling consumers to move beyond the commonly consumed grains such as rice and wheat.

The organisers behind the movement say this could be one of the very few initiatives in India where consumers come together to partner with peasant women farmers to support their ecological agricultural practices. The women farmers in the selected villages have been engaged in millet-based biodiverse farming for generations.

As rain-fed crops, millet-based biodiverse farms do not require external irrigation and are grown without any chemical fertilisers and pesticides–making them an attractive option for health-conscious consumers. For the farmers, the opportunity provides them with a direct connection with their consumers–a link that was unimaginable until now.

For the consumers, the platform is not just an opportunity towards a healthy way of food consumption but also an opportunity to support small-scale women farmers to be self-reliant and make them independent of the vagaries of the market.

A pilot project kicked off on June 16 at Arjun Nayak Thanda, a village in Sangareddy district where the consumer group witnessed the initial sowing session.

Reactions from the ground Addressing the consumers, Chakribhai, a woman farmer part of the initiative said, “I am happy that all of you have come to see my farm and support our way of farming.”

Amidst applause from the crowd that gathered near her farm at ArjunNayak Thanda village, she added, “We want to give all of you healthy food at the end of the season. That is a promise.”

The current project will run in six villages, covering about 206 acres of farmland. Many of the participating urban consumers from Hyderabad were driven by the idea that they would become part of the food production process.

“This is a historic partnership,” said Sneha, a consumer and an employee at Microsoft, Hyderabad. Sneha said she had been bothered about the ignorance regarding the source of the food she consumed. She continued, “There is no point in blaming the market, to which we actively contribute.” She found an alternative through this initiative and assumed an active role in mobilising consumers.

Community Supported Agriculture (CSA) is a globally emerging alternative that involves consumers in the process of food production. However, in this process, the involvement of consumers is often limited to the monetary.

Organisers of this initiative say that they have gone a step further by linking consumers directly with farmers and helping make a connection beyond monetary terms. P V Satheesh, Director of Deccan Development Society (DDS), oversees the activities from farmers side. He said, “Enlightened-ecological-consumer is the concept we would like to like to emphasise.” He opined that the term ‘organic’ has become a trap and there is a growing tendency in the market to monetise the concept–thereby losing the trust of consumers. It is in this context, he said, a healthy pact between consumer and farmer becomes significant.

“A group of consumers here have taken civilisational responsibility to support ecological farmers,” said Satheesh, adding that their journey is going to excite everyone. Jhansi Laxmi, a Telugu TV anchor and environmental activist who is part of the consumer group, said consumers must be aware and concerned about the problems of farmers. “For example, we must be equally concerned about adequate rainfall as much as a farmer,” she emphasised.

With the country enduring an agrarian crisis, she felt that the initiative is a model which must be promoted and encouraged further.

By placing consumers at the center, experts believe that the model offers an ideal solution to the ailing farming sector in the country. As the seeds sprout in the monsoon-drenched farmlands of Telangana, the unique friendship between consumers and farmers is sure to be strengthened.