To beat the drought, women farmers of Anantapur have entered the millet revolution in Andhra

By Karthikeyan HemalathaonJun. 07, 2017in Food and Water

With government support, they are now falling back to their traditional farming practices for a better living. 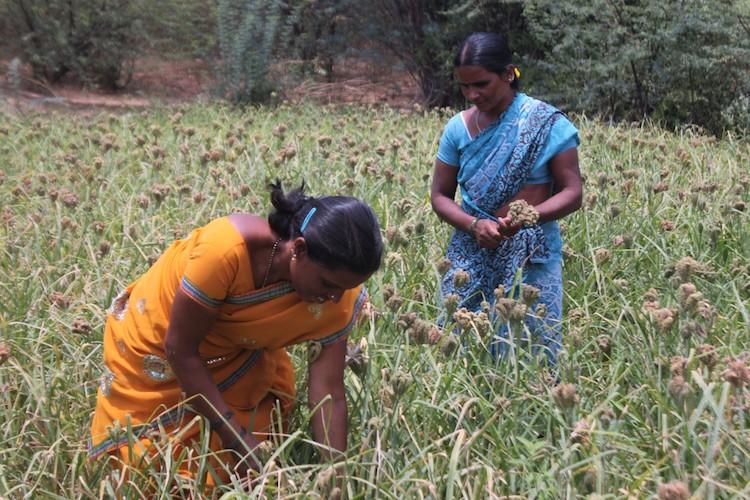 They swept the grounds and spread out a flex banner that was once a political hoarding. The women of Diguvapalli, a village 180 km north of Bengaluru but in Anantapur district in Andhra Pradesh, settle down to explain how they survived the year of 2016.

“People in Delhi and big cities need to know the distress we went through,” C Bhanuja, a member of the Rural & Environment Development Society (REDS), tells them.

And people should, considering the intensity of the drought they have faced for six consecutive years, and the kind of losses they’re bearing.

2016 was a year they lost their cattle to the drought, saw their neighbours leave to Bengaluru in search of menial jobs and helplessly watched their crops wilt away under the merciless sun. It was the year that the district suffered the worst drought in its history, according to government officials.

After six months of introspection, the farmers in the district have come up with ways to beat the ongoing drought. In Diguvapalli, which has a population of 100 families using 200 acres of land for cultivation, farmers have decided to dedicate 100 acres exclusively for millets, which consume less water than other commercial crops.

Specifically, the farmers have decided to focus on bhajra, foxtail and small millets to beat the continuous and seemingly worsening drought.

The drought in Anantapur

From January 1, 2016 till May 9, 2017, Anantapur’s rainfall is already short by 40%. Data from CORE (CM Office Real-time Executive) Dashboard show that while the district should have got 521.5mm of rainfall in this period, it got only 312.20mm. Groundwater levels dropped from 19m to nearly 26m in the same period.

With an average annual rainfall of 570mm, Anantapur is one of the driest districts in the country. Several farmers say that there was not a single drop of rain for nearly 120 days between June and September in 2016 – which is an entire farming season.

“Neither drought nor migration is new to my village, but I cannot remember a worse year than 2016,” said 65-year-old Adilakshmamma from Diguvapalli who owns 1.5 acres of land.

The women’s co-operative of Diguvapalli

Of the 100 plots of farm lands in Diguvapalli, 25 are exclusively managed by women – each owning between 1.5 to 2 acres. These women are mostly single, or have husbands who are either disabled or alcoholic.

In September 2016, these women formally registered themselves as a cooperative society – the Mahila Raithula Uthpathidharula Sangham – with the Union Ministry of Agriculture. These women understand and are experiencing the impact of climate change and global warming at a very personal level.

And they are now falling back to their traditional farming practices for a better living.

“Till last year, I grew only one line of millets for every 10 lines of commercial crop like groundnut or red gram. We mostly consumed the millets we ate,” said Hyderavalliamma, 60, who also processes the millets grown to make it market ready. Hyderavalliamma is a single mother managing three acres of land.

With barren rocks radiating heat and very little rain, farming is not for the feeble. Yet, groundnut is Anantapur’s favourite crop.

This monoculture is a luxury for a district that receives less than 600mm of rain a year on an average and has a tight window for (unpredictable) rains. And when commercial crops like groundnut and pulses fail, farmers go to bed hungry.

“I got only around 300 kg of red gram per acre last year due to lack of water,” said 38-year-old K Nageshwaramma, who owns five acres of land. In a good year, they produce up to 15 quintals of red grams which can be sold up to Rs 5,050 per quintal.

“I sowed my seeds in June and there was not a single drop of rain till September. The crops need rains when they flower – which is around September. With no rains, all I could do was to watch as they just wilted and died,” she said.

According to a report compiled by Watershed Support Services And Activity Network (WASSAN) – the lead technical agency to implement the government’s Comprehensive Millet Revival program – the area under millet cultivation in Kadiri (a mandal under which Diguvapalli comes under) fell from 72 acres in 2005 to 22 acres in 2015.

To improve these statistics, both the government and agencies like REDS are encouraging farmers to grow more millets by different means.

On April 27, REDS, along with the Department of Agriculture, organised a ‘Rayalaseema Crop-Biodiversity Festival’.

“The idea behind the festival was to bring farmers together and make them showcase their best seeds – crops that are drought resistant,” she said. The festival was a coming together of ideas, knowledge and local resources, added Bhanuja who coordinated the event. Venkat Reddy, a farmer from the region, at the Crop Bio-diversity Festival. Children give a welcome to T Vijay Kumar, advisor to the state govt (agriculture) for the Rayalseema Crop Biodiversity Festival in Kadiri on April 27.

The government meanwhile procured Foxtail millet for Rs 1,750 per quintal.

“This was an important step that the government took, to provide ready and accessible markets for millet farmers, by setting up procurement centres. These procurement centres were run by farmers’ cooperatives, within 10km of a farmer’s reach, to enthuse them to grow more millets,” said Kavitha Kuruganti, co-convener for Alliance for Sustainable and Holistic Agriculture (ASHA), which is an informal network of grass-root organizations across the country.

“There was not much money in millets before. Even if I grew them, who was going to buy them?” asked Hyderavalliamma.

“This year though, we decided to dedicate at least half of our lands to millets,” she said.

The women see no other alternative. “Those who did not sow millets in November have now migrated to Bengaluru to work in garment and construction industries,” said Adilakshmamma.

“Last year, the millet I grew saved my cattle,” she added. The Kharif experience made the farmers of Diguvapalli decide to sow millets for Rabi as well.

With 2016 being an exceptionally low year of rains, even millets had a tough time to grow. The state government of Andhra Pradesh does not hesitate to describe unpredictable rainfall and searing heat as a symptom of climate change and global warming.

“Anantapur district has always been prone to bad rains. However, the predictability factor of monsoons has reduced drastically over the last 20 years. The window for farmers to sow and harvest their crops has tightened considerably,” said T Vijay Kumar, Special Advisor (Agriculture) to the Andhra Pradesh government.

He said the government is responding to these changes by introducing innovative schemes that help farmers become more climate-resilient.

“With ZBNF, the idea was to ensure that they do not require any resources outside their village. With no chemical pesticides or fertilizers, costs came down by 60% to 70%,” said Kumar.

With the CMRP, government gives a push to the entire journey of millets – from sowing to harvesting to building processing centres (de-hull, de-stone) to creating markets for these nutritious food crops in small towns. The government partnered with community based organizations to ensure the scheme was implemented at the mandal level.

“Under the comprehensive millet revival program, we aim to increase the acreage under millets to at least one lakh acres in Rayalaseema region and north coastal Andhra Pradesh,” said director of WASSAN, A Ravindra.

Scaling up is the need of the hour

Analysts and activists say that these schemes are a step in the right direction, even though the current scale may not make a significant difference. Underground water exploitation has been the norm in Anantapur. The tiniest of wells and any source of underground water was quickly depleted by farmers.

“There is a sense of desperation. With increasing aspirations and no rains, any source of groundwater is quickly depleted. Farmers sell their assets, borrow money and use agro-chemicals to make the best of their situation without thinking about being sustainable,” said Kuruganti.

First published by The NEWS Minute