Three organisations from India have been selected as sustainable energy heroes at the international Ashden awards.

The Chhattisgarh State Renewable Energy Development Agency (CREDA) which uses solar to change the way health centres in the state operate, Ecozen Solutionswhich specialises in portable solar cold rooms for farmers and Shuttlwhich is tackling pollution caused by traffic congestion in some of India’s busiest cities, are among this year’s winners.

In all, 20 organisations working at the frontline of sustainable energy in the fields of health, cities and buildings, finance, energy access, mobility and powering business were shortlisted for the 2018 International Ashden Awards which recognises “pioneering sustainable energy solutions that transform livelihoods across three continents and address climate change from every angle”.

Sanjeev Jain, chief engineer for CREDA, one of the winning organisations, told Mongabay India that while relying on the grid for electricity, health care centres in rural Chhattisgarh used to suffer up to eight hours of power cuts every day. “This meant having to deliver babies without light and relying on noisy, polluting diesel generators for vital medical equipment,” he said. CREDA is the winner of the 2018 International Ashden Award for Sustainable Energy and Health. Photo by Ashden.

CREDA has been working with the department of health and the department of energy to provide solar power to primary health care centres, district hospitals and accident and emergency hospitals. The aim is to electrify every health care centre in Chhattisgarh, as part of the union government’s mission to provide power to every village in India, he added.

Solar power has brought the benefits of electrification to villages in the state – health care centres now offer more reliable health services and patients do not have to travel long distances to larger hospitals, pharmacies can order medicines online, medical records can be digitised and vaccines can be kept for longer using solar-powered fridges and freezers.

CREDA’s initiative is a state government-funded programme supported by the departments of health, energy and education working together to prioritise funds for solar systems and other sustainable energy infrastructure. This instance can be emulated in other states as well, cite officials, by simply replicating the model. In an official release, Ashden mentions that CREDA’s instance is a wonderful example of “how a state-run partnership can integrate renewables, deliver reliable healthcare and work towards creating a sustainable energy hub.”  Under the programme, solar PV systems have been installed and maintained in almost 900 health centres in eastern India.

Responding to the win, Jain said, “We are delighted that CREDA’s work on solar energy in the health sector has been recognised by Ashden and selected for a prestigious award.”

“As an organisation, we are focussed on sustainable renewable energy solutions for the development of people in rural areas. We are now more energised to take on new and challenging projects which will benefit society and the environment,” he added. The second winner, Ecozen Solutions, has been recognised for developing solar cold rooms aimed to enable farmers to store produce which in turn improves distribution.  Farmers using the cold rooms usually break even after two years and have seen as much as a 40 percent increase in their profits.

On how the idea came about, Kishan Dhameliya, in-charge of Special Projects for Ecozen, told Mongabay-India, “The levels of food waste in India are shockingly high, up to 30 percent of perishable produce is wasted before it reaches customers. In India alone, 10 million tons of cold storage would be required to combat this problem and that’s where the idea for EcoFrost was born.” Ecozen is the winner of the 2018 International Ashden Award for Powering Business. Photo by Ashden.

The solar-powered  micro cold storage unit is suitable for small farms. Previously, cold storage was only available to farmers with large farms, who would hoard when supplies peak, leading to price fluctuations. Now, farmers have more control of when they sell their products and can sell at higher prices.

Detailing how these cold rooms work, Dhameliya informed that a 4kW solar panel is used meet the energy requirement for each cold room. On a normal sunny day, 16 units of electricity is generated at each system. Thermal energy storage is also used to store energy and this is more efficient than normal batteries for cooling applications. Additionally, it can last for 10 years, unlike normal batteries which last only for five years. The system also uses an advanced motor control algorithm which helps vary the motor capacity from 60 percent to 180 percent, thereby tapping the maximum solar envelope to run the compressor.

Ecozen Solutions enables farmers in western India to store produce at the point of harvest in solar-powered cold rooms. Photo by Ashden.

EcoFrosts have a thermal back-up of up to 36 hours when there is no sun. Since there are no large batteries to maintain, the EcoFrost is also easily portable. Additionally, the temperature and humidity sensors can be controlled remotely and via Bluetooth from a mobile phone to change the settings via the app depending on what produce is being kept inside.  The fact that the app can predict market prices also works to the advantage of the farmers.

On how things have changed for the farmers owing to the solar cold room, he states, “A rose farmer grows 0.7 million sticks of roses from 1 acre of land and spends $16,667 per annum on his operations. Previously, he used to get $1 per 20 sticks as an average selling price. Now, with the cold room, he gets $1.33 per 20 sticks as an average price as he is able to sell his produce at the right time. He can transport roses to markets that are further away at prices that are much more rewarding. As a result, his net profit has increased from $18,333 per annum to $30,000 per annum.”

Currently, farmers in Maharashtra and Andhra Pradesh have been extremely receptive towards this innovative technology. Dhameliya feels that the Ashden Award is an important mark of recognition that will introduce Ecozen to others in the sector. 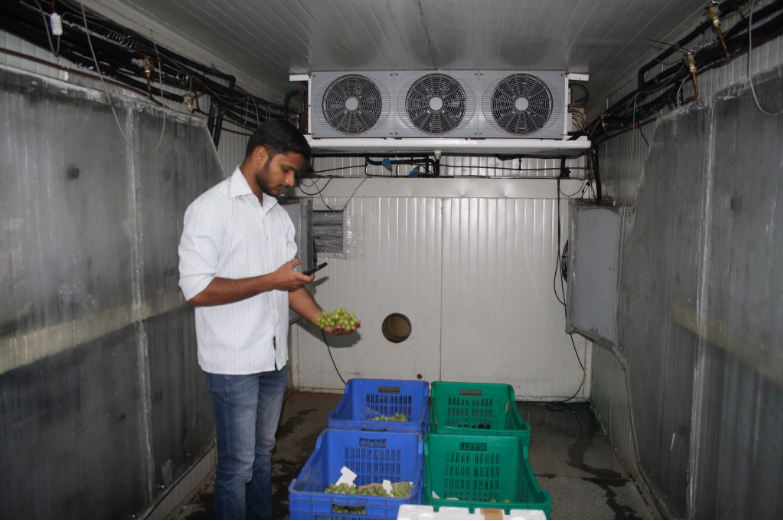 Farmers control the temperature and humidity of the storage unit with a smartphone app and can also record the quantities of perishables stored. Photo by Ashden.

The road to tackling pollution

Undoubtedly, traffic pollution is the biggest bane of cities across India.  As more cars come on the roads, residents are subject to the pollution every day, specially as they commute to work. One of the ways to tackle this issue is to reduce the number of vehicles on the road and opt for public transport instead — exactly what Shuttl, this year’s winner of the Ashden Award for Sustainable Mobility, has been pushing for. Shuttl is the winner of the 2018 International Ashden Award for Sustainable Mobility. Photo by Ashden.

In Delhi for instance, the company has cut the 2.6 million car journeys (carried out every year) to 1.6 million, saving between 2,000 and 3,000 tonnes of CO2 emissions annually. In NCR and Kolkata, they have been able to provide clean, safe, air-conditioned buses that are reducing commuter car journeys, reducing pollution and delivering a service that can be booked using a mobile phone app. Owing to this app,

10,000 cars have been taken off the road each day, 57 percent users have switched from private vehicles and 66 million passenger miles have been served to date.

With 700 plus buses and 50,000 rides a day, Shuttl operates in Delhi-NCR, Kolkata, Pune, Jaipur and Bengaluru. Plans are on to ply in all the big cities of India, around 10 of them, in another six to nine months. “We are considering global opportunities as well,” Singh revealed.

On an average, a Shuttl ride costs around Rs. 100 ($1.50) for about a 32-kilometre (20-mile) journey. Reacting to the win, Singh explained, “It is extremely important for us and comes at the right time when policy makers and administrators in India are looking for partners to battle rising car population and the congestion in cities.

The award brings Shuttl at the center of sustainable mobility conversations in India and would open doors for collaborations and partnerships.” The Ashden Awards are a globally recognised measure of excellence in the field of sustainable energy and winners receive tailored support to help scale up their work and a prize of up to £20,000 (around Rs. 1.8 million). This year, the awards will held on June 14 at the Royal Geographical Society in London.