By Manabi KatochonMay. 16, 2017inFood and Water Kishore and Vishalakshi with their sons

For three years the couple struggled before realising that they needed to learn more.

What started as a family’s aspiration towards a rustic homestead has gradually evolved into a community farming initiative in a village near Bengaluru.

Nine years ago, there lived a happy family in the heart of Bangalore, as Bengaluru was then called. Well paid jobs and a luxurious life, they had everything that seemingly defined happiness in contemporary times. So what made this family move to a village and take up farming, leaving behind their urban life?

This story is of Vishalakshi Padmanabhan and Prof Kishore Kumar, and their two children. In 2008 Vishalakshi, a chartered accountant was working at a corporate company, earning Rs.20 lakh per annum. Kishore taught Kannada literature in the city’s Sharada College. They had two sons and a seemingly perfect life.

However, the couple never wanted to raise their children in the mechanical life of a city. They did not want the boys to be a part of mainstream education, which according to them is information-based rather than skill-based. They wanted them to lead their childhood in fresh air and learn from the nature.

This was the sole reason for them to leave their jobs and settle in a village, that fringes the Bannerghatta National Park.

Living in urban areas all her life, Vishalakshi admits her intrinsic connection to the city. Hence, they chose to move to a village, with only 14 families, just 30 km from Bengaluru.

In Kariappana Doddi village, the couple bought 1.5-acre land. They built a house and set up a small farm to grow food for the family. However soon they faced the reality of being agriculturists. Challenges abounded, from drought to community hurdles and the frequent elephant raids from Bannerghatta. For three years the couple struggled before realising that they need to learn more. Thus, they began to travel around India, meeting farmers from every possible state.

Their travels showed them that the lack of collective and shared knowledge was one of the farming community’s biggest obstacles.

“They did not have the privilege of connecting and sharing knowledge with other farmers. Hence they adopted everything which reached them through the little exposure they had to the traditional farming methods. They were blindly using the seeds and fertiliser available in the nearest agricultural office and following the methods used by every other farmer near them,” said Vishalakshi.

Vishalakshi and Kishore not only invested in such learning but also passed it on to farmers in their village. Being outsiders, from urban areas no less, made it difficult for them to gel with the villagers initially but the couple kept helping the villagers and gradually gained their trust.

“We cannot match the expertise of the farmers who are doing this since generations. We will always be behind them in experience, however what they are lacking is sharing of knowledge and we can help them in that,” says Vishalakshi.

The village had been drought-ridden for years, which limited farmers to cultivating only a few vegetables. To solve the water woes, the family motivated villagers to share water from the common pond and also helped to set up a bore well for every family in the village.

With time, the couple invested in more land and made a huge storage unit in their farm. This storage pace was opened to all villagers for free. Now, they could now grow seasonal vegetables with minimum water and store them for the entire year.

The next step was marketing of the produce. Following Vishalakshi and Kishore, many villagers started organic farming but they needed a market to sell this produce, minus middlemen.

Thus Vishalakshi founded Buffalo Back, an organic farming collective that would benefit all stakeholders involved—farmers, consumers and the environment. “With the rural community ready to grow and process food in the safest possible way, all that we needed was a market which was open enough to understand the nuances of agriculture and its dependence on resources most of which are consumed (at times abused)  by all of us. To fill the gap in the market we moved into a collective mode to bring together budding entrepreneurs, volunteers, experts, students, artists, story tellers etc to work together on nurturing a sense of  conscious consumption, more specifically in the urbanites,” says Vishalakshi.

They also set up a small traditional processing unit where hand mills were used to grind and process the grains, employing the village women. The mill was a boon, as these women could work in the village and no longer had to travel to work in city factories as labourers. 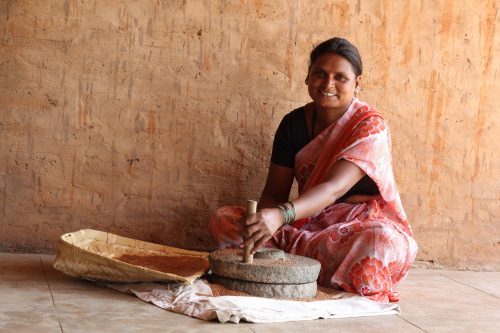 A village woman processing her grains

Vishalakshi and Kishore also helped the women sell these processed products by setting up stores in Bengaluru. The best part? The couple does not charge the farmers anything for these initiatives.

Vishalakshi realised the need to introduce forgotten varieties of grains and millets to both farmers and consumers. With a project called Roots to Grain, she made consumers aware about ancient foods.

Recently Buffalo Back’s customers were introduced to a variety of native rice varieties, which they call as ‘Folk rice’. These ancient varieties are known to have characteristics like drought tolerance, flood (even submergence) tolerance and salt water tolerance. In a nutshell, these are extremely climate resilient crops with an added dose of fragrance. The three varieties introduced were kala bhath (Black Rice), jasmine rice and kala nunia.

There are wheat varieties on offer too, like khapli (emmer), kathiya and the recently-acquired pygambari wheat, a sugar-free variety whose roots draw back to the Indus Valley Civilisation. The duo have consistently used feedback, from farmers and consumers, to introduce new organic products, including floral drinks made from the roselle flower (hibiscus sabdariffa) and even organic Holi colours.

Vishalakshi and Kishore have also indulged their love for fruit trees, planting around 150 saplings of fruits in their farm.

They also keep planted fruit trees at the periphery of the village to keep elephant raids at bay. They are also researching techniques to keep the elephants away from the farm, of the major concerns for all farmers in the village.

As for their children, the boys go to an alternative school and are taught at home too. The family leads their days in happiness and contentment just like they had wished. You can meet Vishalakshi and Kishore, and buy their lovely products at the stores located at Jayanagar, Yelahanka and JP Nagar in Bengaluru. For more information log on to their Facebook page.