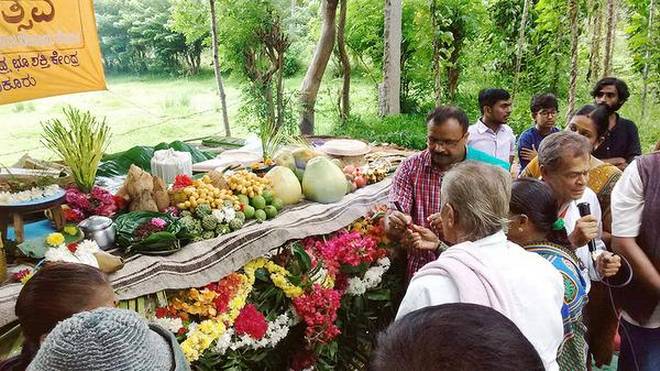 Shree Bhairaveshwara Thota, a farm around 10 km from Tumakuru, was a hub of activity on Sunday as farmers, consumers, agriculturalists, and water conservancy experts participated in a rather unique farm festival called Buthi Kattu (pack your lunch).

The aim of the day-long festival — organised by the School of Natural Farming, Tumakuru Science Centre, Bhooshakthi Kendra, and Karnataka Rajya Raitha Sanga — was to promote natural farming methods and organic food at affordable prices.

Rain did not dampen the spirit of hundreds of people who came with their ‘buthies’ packed in dried arecanut leaves. The festival was inaugurated by theatre director and playwright Prasanna.

Farmers, who grow organic produce, interacted with people who want to consume chemical-free grains, vegetables and fruits that are not sold at a premium. “The festival promotes natural farming among the farmers and creates awareness among consumers. We have also a concept called ‘know your farmer’ for people to get to know the person growing their food,” said C. Yathiraju, convener, School of Natural Farming.

The interaction helped bridge the urban-rural divide: farmers learned more about buying trends and what buyers are looking for while shopping. While consumers got a chance to talk to farmers about the importance of eating local and seasonal food.

Families who came from Bengaluru learned about the sustainability of multi-cropping and its advantage over mono-cropping systems. “As a consumer, I think city residents should visit farmers and encourage them to grow chemical-free food products,” said Stanley George, a businessman from Bengaluru.

Farmers, too, spoke about sustainable practices they have adopted. “Owing to lack of rains for the last two years, I was not able to grow ragi and pulses. Now, I have adopted natural farming and grow lemon, jambu fruit, drumstick, and castor in 20 guntas of land,” said Puttamma, who owns an acre of land at Chikka Agrahara, Sira taluk.