Kaliyuva Mane means “home for learning” in Kannada, and it is the absence of a mainstream classroom system that differentiates it from other experimental schools.

“There is a 12-year-old girl who stays in a slum. She used to go to a government school but had to drop out because her family could not afford her education. She then started working as a child labourer and continued to do so for about two years to help her mother earn a living. After some time, an organisation approached her and wanted to help her study again. But where are the schools for children like her who have to start with the very basics? She will not be able to understand anything if sent to a classroom full of children her age. We call such students ‘out of system children’,” says Ananth Kumar, the founder of Kaliyuva Mane, a free quasi-residential experimental school for rural children. 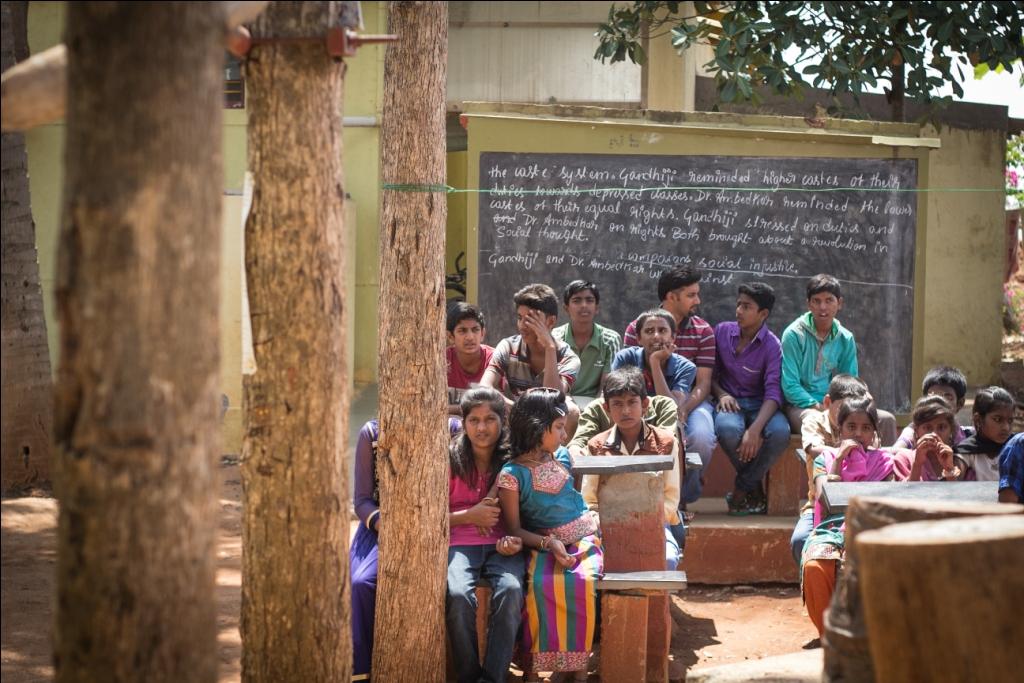 Located in Kenchalagudu village, about 15km from Mysuru, Kaliyuva Mane is a school for “out of system children”—children who come from underprivileged backgrounds, whose parents were ignorant about the importance of education, who have some intellectual disabilities, who were school dropouts or child labourers, and many more.

Kaliyuva Mane means “home for learning” in Kannada, and it is the absence of a mainstream classroom system that differentiates it from other experimental schools in the country.

Children here are not assigned classes when they enter the school for the first time. They are free to roam around the campus and do whatever they want. And when they are doing so, the teachers observe them. Then they assess the academic level of the children and the curriculum is designed based on their individual needs.

After this, each child is put in a “team” instead of being placed in a grade. Each team has a unique name – like Chetana, Chaitanya, Viveka, etc.

The names of the teams keep changing so that children do not understand what grade they are in. This way, there is no scope for the children to feel inferior or superior and they can concentrate on learning. Tests are conducted at frequent intervals to understand what a child needs to be taught next and he or she is shifted to another team based on performance.

Children who come for admission to Kaliyuva Mane have usually heard of it by word of mouth. They are interviewed and preference is given to children belonging to first generation BPL families from a rural setting.

There is no fixed period for admission and no entrance test is conducted. Children below 12 years of age are usually preferred and neither children nor their parents need to mention their caste or religion at the time of admission.

“Schools are for children, not children for schools—that is the policy we work with. Currently, about 35 kids live with us on the campus and the others are day scholars. We bring some of the kids, who live a little far away, in our own vehicles. Those who come from nearby villages take the city bus and others who live close by, walk,” says Ananth. No fee is charged for boarding, transportation or tuition.

Schools are for children, not children for schools—that is the policy we work with. Ananth Kumar, founder of Kaliyuva Mane

While some teachers work voluntarily, others are salaried employees. The school is Kannada medium and there is one teacher for every 10 children.

The curriculum includes subjects like Kannada, English, math, science, and social studies, other than classes on basic hygiene, moral values, etc. The method of teaching is also very different here. There is an optional curriculum other than the compulsory education to nurture the children’s interests and hobbies. Other interesting aspects of the school are a mock court to help children settle quarrels and disputes, and a kid’s bank run by the children themselves to help them learn banking basics and improve their arithmetic skills.

An engineer by qualification, Ananth worked in different organisations for about 10 years before giving it all up to work as a volunteer with Vivekananda Kendra in Kanyakumari for a year and a half. “In 1992, I settled down in Srirampura village on the outskirts of Mysuru. There I got a chance to observe the education system in rural India closely. And I saw that children were going to school but they were not able to reach the learning levels they should have. Children in Class 5 were not able to read books used in Class 1,” he says.

Greatly influenced by the teachings of Vivekananda and Sri Aurobindo for service towards society, Ananth, along with some friends, started teaching free supplementary classes in the village. A government school gave them some space on its premises to teach from 6-8 am and 7-8 pm. The response from the children was very good and it was this volunteering experience that inspired Ananth to plan his dream school.

Ideally, we want to support the students till they stand on their own feet.Ananth Kumar

In 1999, he founded the Divya Deepa Charitable Trust, along with some of his friends, to run the school. And Kaliyuva Mane was finally set up in 2005 with just 14 children. Two children from Srirampura also joined the school, along with his own son. His wife joined as a full time volunteer. Today, the school is working with 114 children, four of whom are in college now.

“Ideally, we want to support the students till they stand on their own feet. But it is very difficult due to financial constraints and limited manpower. But even then, we support some students who come from extremely underprivileged backgrounds when they enter college,” says Ananth.

The children study at Kaliyuva Mane till they are ready to take state level board exams; they appear for these exams in collaboration with another school. Initially, the Trust was run with the founder’s personal funds for about a year. Today, it gets help in the form of donations from volunteers and some other public and private organisations.

“Education depends on a lot of things—the environment at school, parents’ education, financial level of parents, etc. In 2010, a 16-year-old boy named Prashant came into the school. He was a child labourer, a school dropout, and his mother worked as a domestic help. He came in asking for work. I asked him if he wanted to study instead and he said yes. He passed his board exams with flying colours, went to college and has now found a job. Similarly, there is Manu. His parents are farmers and he had to drop out of school after Class 1. When he came in, he could only write his name in Kannada. Today, he has a job with a government agency. Stories like these keep me motivated to continue doing what I am doing, every single day,” concludes Ananth.

Read a more recent article on this school