Despite being on the frontlines of peacekeeping, Naga women have been denied a stake in official peace talks. The National Socialist Council of Nagalim (Isak-Muivah) and the Indian government, engaged in peace talks for over two decades, may have finally found common ground, but other enduring fault lines have cracked open in the process.

Manipur’s Meiteis, the state’s most dominant ethnic community, are up in arms over concerns that the proposed solution to the six-decade long Naga insurgency would affect the political arrangement of their state. The state has been besieged by shutdowns over the last couple of weeks. Angry protesters have warned of “serious consequences” if the final Naga agreement were to affect Manipur.

Naga armed outfits seem indifferent to the churning in Manipur and the clash of interests. “It is the concern of the Indian government,” is the most common response.

In this charged atmosphere, a Naga women’s collective has reached out to the Meira Paibis, Manipur’s “women torch bearers”. On November 12, the Naga Mothers’ Association and the Meira Paibis met in Imphal to discuss the impasse.

“The situation is quite tense now, so it is difficult for the armed groups or the Nagas in Manipur to reach out to Meitei groups,” said Rosemary Dzuvichu, an advisor to the Naga Mothers Association, explaining the collective’s decision to initiate dialogue. “So, it is important to those of us who can do it as we have also done in the past.”

While Meitei armed groups are yet to enter formal peace talks with the government, the Naga peace process has a long and fraught history. This is not the first time either women’s group has stepped in to handle the messy fallout of the peace process. But Naga women’s groups have consistently been left out of the official dialogue with the government.

Over the years, the Naga Mothers Association has repeatedly asked to be made party to the Naga peace talks, but their participation has always remained peripheral. “We have been talking about the presence of women at the negotiating table,” said Dzuvichu. “There were no women, even on the government of India side, but after we raised our concerns, the NSCN (IM) included two of its women members in some negotiations.”

As a Naga activist put it, “ It is as though the men will do the tough talking, but when it comes to doing the dirty work of frontline peace, it’s the woman’s job.”

The Naga movement revolved around creating a sovereign ethnic homeland that would include Nagaland as well as the Naga-inhabited areas of Manipur, Assam, Arunachal Pradesh and Myanmar across the border.

Tensions started escalating in Manipur in October, following news that a final Naga solution was imminent. The main bone of contention in Manipur: parts of the state’s hill areas would be converted into a Naga satellite territorial area council, governed in some measure by a bicameral Naga parliament. Both Kuki and Meitei ethnic groups in Manipur protested against the proposed Naga solution, although the Meitei protests became more visible.

Any solution to the Naga political question at the expense of Manipur’s “political identity”, Meitei civil society groups have repeatedly affirmed, would not be accepted.

Beyond this rigid public posturing, however, there have been informal meetings between Naga and Meitei civil society groups to try and chart some sort of a middle path. But they have failed to achieve much. “They were just thought-sharing casual engagements – hi-hello meetings with no accountability,” said Khuraijam Athouba, general secretary of the United Committee Manipur, a powerful civil society group that represents Meitei interests. “None of those meetings ever ended with any kind of resolutions.” 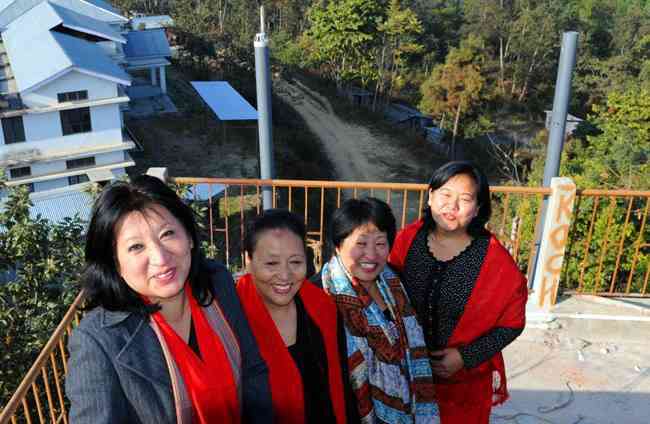 Members of the Naga Mothers Association.

The Naga Mothers Association’s gesture at this tense moment, many are hoping, could be the much-needed ice-breaker. “It is significant that a Nagaland-based group should reach out to the Meitei group,” pointed out Nandita Haksar, a rights activist and a long-time observer of the Naga political struggle.

So far, the Naga side, in a majority of these informal meetings, had been represented by Naga groups based in Manipur’s hills. Tensions between ethnic communities within Manipur seem to be running so high that it needed intervention from groups outside the state.

This is not the first time that Naga women have waded into troubled waters to keep the peace. In 1994, as Nagaland became the site for violent internecine conflict and an equally brutal state response, the Naga Mothers Association formed a “Peace Team”, as part of a campaign called “Shed No More Blood”. “The way in which our society is being run whether by the overground government or the underground government, has become simply intolerable,” it stated in a strongly-worded pamphlet, hitting out at both Indian security forces as well as warning Naga armed groups.

Political observers say the campaign was somewhat successful. “It helped to stabilise the deteriorating political conflict situation between the Indian military and the Naga underground force,” said Toshimenla Jamir, who teaches sociology in Nagaland University.

The Naga Mothers Association’s efforts would only grow from there. Around the same time, two of its members are supposed to have trekked down to the jungles of Myanmar, where Naga militant groups were camped at that time, to convince the rebels to talk to the Indian government.

In fact, the Naga Mothers Association was instrumental to the NSCN (IM) signing a ceasefire with the Centre in 1997 – they actively arbitrated between the Indian government and the outfit to pave the way for a truce.

Over the years, the Mothers would go to Myanmar several times – the most recent expedition was in January 2018 – to persuade the NSCN (Khaplang) to join the peace talks. The NSCN (K) was birthed when the NSCN split into two factions in 1988.

“Naga women have always played an active role in facilitating peace in the state,” said Jamir, “In fact, even traditionally, women did play the role of arbitrators in times of conflict between warring groups.”

But it is not just inter-factional rivalries between sparring Naga armed groups that Naga women have attempted to resolve. For instance, the Naga Women Union of Manipur have, on several occasions, tried to mend the historically hostile Kuki-Naga equation through feminist solidarity.

Liaisons with the Metiei women’s organisation are not new either. “We along with the Naga Women Union, Manipur, held a consultation meeting with the International Meitei Women Association at Imphal in 2000,” recalled Neidonuo Angami, one of the founding members of the Naga Mothers Association and a former president of the collective. “We also visited Meira Paibi leaders in some localities at that time.”

More recently, in 2016, the Naga Mothers Association collaborated with the Meira Paibis to resolve an “economic blockade” that a Naga outfit had enforced in Manipur’s hills to protest the creation of two new districts.

In Manipur, which is caught in its own brutal cycle of insurgency and counter-insurgency, the Meira Paibis have played a similar role of reconciliation. While they have rallied against alleged human rights violation by security forces, they have also routinely confronted the ethnic insurgent groups on charges of extortion and other criminal excesses. These peace efforts would dovetail with social movements against drugs and alcohol.

The lack of female participation extends to electoral politics in Nagaland, even though Naga tribal and civil society leaders have often insisted that the patriarchy which operates in the Indian mainland does not apply to their community, where men and women are treated equally. Yet, despite women having more economic independence than in most other parts of the country, they have never been part of traditional decision-making bodies at the village level.

In the 55 years since it became an Indian state, Nagaland has only seen one woman member of Parliament, Rano M Shaiza, who was elected to the Lok Sabha in 1977. In fact, few women have even contested elections at any level.

Any attempt to change that is met with fierce opposition from tribal organisations in the state. In 2017, the state erupted in violent protests as the state government called for elections to urban local bodies with 33% reservation of seats for women, in line with the laws of the country. Tribal groups insisted that the move disrupted tribal customary laws that were protected under Article 371(A) of the Constitution. They accused the Naga Mothers Association – which was at the forefront of the demand to implement 33% – of undermining Naga traditions. Members receive a prize for their work.

The protests became so extreme that the chief minister had to step down. Ever since, there have been no talks of either elections to the local bodies or reservations. The Naga feminist anthropologist Dolly Kikon wrote at the time:

The denial of rights to Naga women by citing Article 371(A) is not new and has nothing to do with upholding the customary law and culture of the Naga people. It is a way to propagate male hegemony and authority in Naga society, cloaked in the language of justice.

Other social scientists have pointed out that the Naga women’s interventions as “peace” activists are encouraged – but not their political aspirations. The former is seen as being in sync with their traditional gendered roles.In a paper titled The Naga Women’s Interventions For Peace, academic Paula Banerjee writes:

It can be argued that one reason the Naga women in peace movements have achieved such success is that these movements do not challenge the traditional role of women but instead negotiate spaces within these roles. Peace-making in the family has always fallen on women’s shoulders; it is part of their traditional role. The Naga women have appropriated this aspect of their traditional role for present-day political purposes. They appeal for peace as mothers, wives, and sisters. Their rhetoric is always personal. Their leadership in these organizations is thus accepted without recriminations because they do not appear to challenge traditional gender roles.

‘A matter of time’

Yet, the Naga mothers have not lost hope. Dzuvichu said that while they may not have been in formal attendance at the negotiating table, they were “in touch with the groups” throughout the process. “We have had several consultations with them,” she said.

Angami, who is popularly referred to as the “mother of peace” in Nagaland, was sanguine.
“There was a time when women were not even allowed to participate in the public sphere, but I believe things are slowly changing for the better,” she said.

“We will surely take part in politics and other decision bodies too,” she added. “It is a matter of time.”