With the help of NGOs, women in five small villages in Uttarakhand have transformed their lives using water harvesting, kitchen gardens and organic farming “It used to rain gently over many days, not continuously. That used to be good for our fields and to replenish water springs downhill, but now that has changed,” says Kidi Devi, who lives in the village of Moan in the Himalayan Indian state of Uttarakhand. The village is tough to access due to difficult mountainous terrain. “Over the years, the rain has become erratic and untimely. It destroys our fields and we face a big problem with water availability.”

“It snows much less in winters than it used to and our water springs are drying gradually,” adds Anita Bahuguna, who lives in the nearby mountain village of Ranichauri, around six kilometres uphill from Chambaghat falls in Tehri Garhwal district.

But in 2011, a positive turn came to their lives when the Women Action for Development (WAFD) NGO started a project in five different villages near Chamba. The aim of the project was to train women as “climate leaders” so that mountain communities could adapt better to the effects of climate change and use scarce natural resources more efficiently. Soon, rooftop water harvesting structures were setup in some houses to collect and save the most precious natural resource – water.

For women like Kidi and Anita, who rely directly on natural resources in day-to-day life, even a slight change in rainfall patterns can spell doom for their fields and increase their labour when it comes to the collection of water and other natural resources. The rain also exacerbates the danger in navigating the treacherous mountain terrain on which these women (and often young children) have to carry heavy buckets and pots full of water uphill and downhill. “We are very happy with the initiative. It has brought a huge difference to our lives. Earlier, children didn’t get any time to study as they would be required to go and fetch water right after they returned from school. But ever since we have started harvesting water, children can go to their tuitions instead,” says Bahuguna.

Significant evidence now shows that climate change impacts women more than men, primarily because of the social roles they inhabit. That is why WAFD has collaborated with INSEDA (Integrated Sustainable Energy and Ecological Development Association) to help women take a lead in sustainable development in the region. Their partnership is focusing on making a difference in women’s lives under the eco-village development programme, a volunteer based initiative. 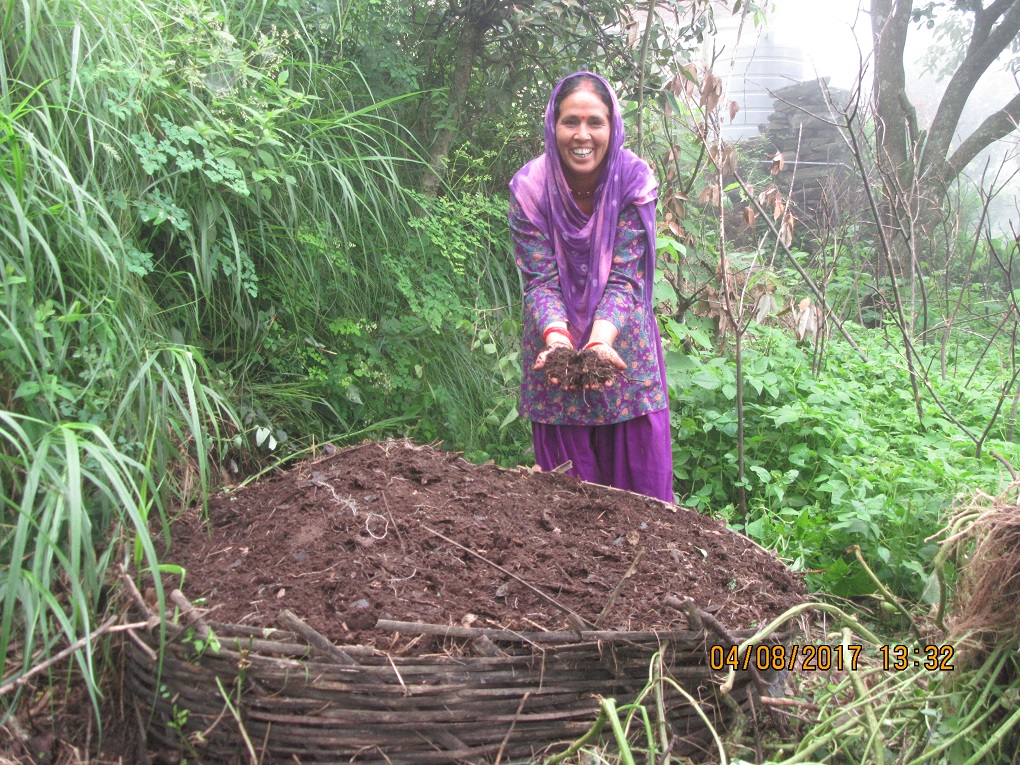 Anita with her compost bin [image by: WAFD]

Rainwater harvesting tanks are made from baskets of woven bamboo strips that are reinforced by cement and concrete to lend strength and leakage proofing. With a capacity of 3,000 litres each, they collect water from the rooftop of houses and store it into tanks that can be used in the dry season.

“WAFD helps us financially while we provide labour and contribute 25 katta of sand and 6 katta of cement (one katta= 25 kg) for each tank,” adds Devi as she leads the way uphill to Guriyali village, which suffers the most from water scarcity in the region. For this reason the most water tanks (22 out of a total of 46) have been installed in this village.

Zareen Myles of WAFD, told thethirdpole.net: “Guriyali has no water source and the women have to walk three kilometres to fetch water daily. But with the water harvesting structures, many now just make one or two trips a week.”

The natural water resource has dried up in Guriyali village over a period of time and now villagers have no option but to rely totally on rainfall, which is becoming increasingly irregular. Due to the high altitude, it took a long time to build a water pipeline to the village. When the water comes, there is only a trickle and there is a jostle to access the one tap in a village of more than 60 households. 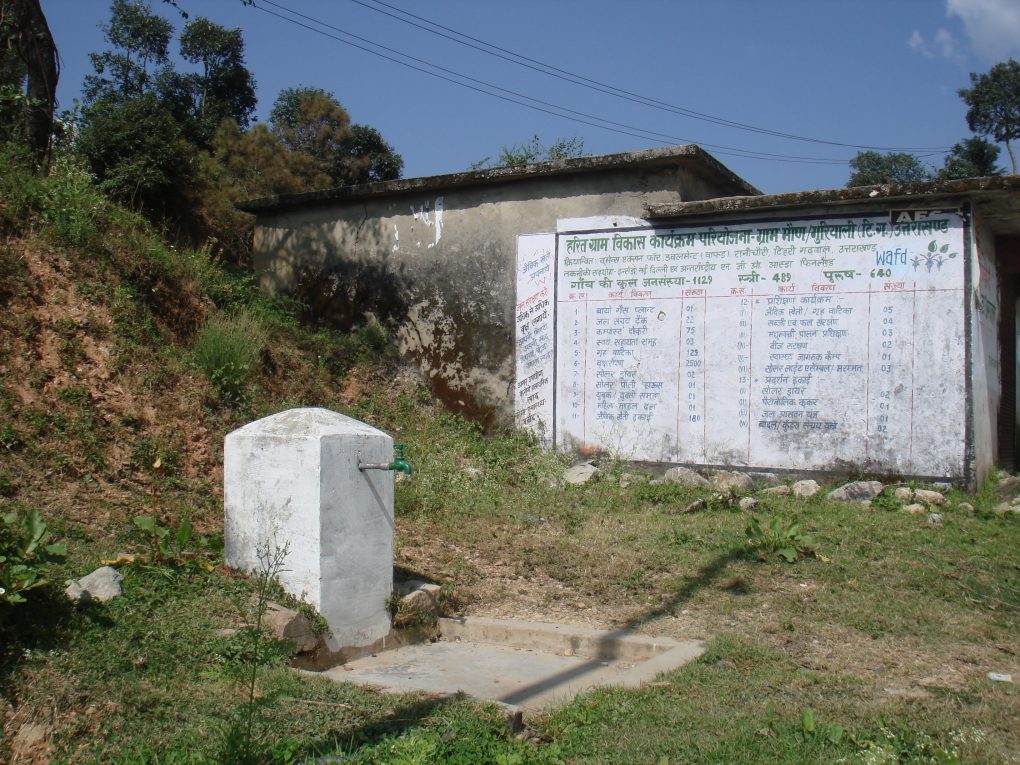 The lone tap that supplies water to the village [image by: Juhi Chaudhary]

Seeing the success of water conservation, there is now a big demand to create more structures in the village, especially by women who have to make up to 10 trips downhill on a daily basis to fetch water from the closest spring.

Pushpa, a farmer in Guriyali, is waiting for a water tank to be set up in her house to ease her burden. She has to climb steep steps cut into the mountain to reach her house and go further down to her fields.

“There is a big problem with water and now that we also have cattle, there are children whose only job is to fetch water throughout the day as I have to tend to the fields. We have to make four trips [three kilometres each] in the morning and four in the evening. We really hope a water tank is constructed soon so that we can breathe a sigh of relief,” says Pushpa while harvesting her pea crop. With the introduction of water harvesting and training in organic farming by WAFD, women are now also able to turn their kitchen gardens and fields into high yielding spaces, adding to climate resilience and ensuring their food security.

Women have been trained to weave compost baskets out of bamboo reeds and almost all the people in five villages – Ranichauri, Savli, Moan, Guriyali and Jagdhar – have replaced the use of pesticides and chemical fertilisers with organic farming. This has increased the yield, ensuring economic stability and reducing effort.

“We already had kitchen gardens but we didn’t have the knowledge; we used to throw seeds randomly which hardly yielded anything. But now we have been trained to make separate beds so even if a crop fails, we don’t go hungry and can share our extra produce with villagers in need. We can also sell the surplus at the same time,” says Krishna from Savli village. “We have become self sufficient and are able to grow almost everything we need, including condiments. We just need to buy sugar, oil, tea leaves and cumin.”

The transition to organic farming has allowed people to save the INR 400 (USD 6.20) every season that they used to spend on chemicals and pesticides. The quality of soil has also improved. Thanks to different crops with improved yield and taste, they are able to make INR 4,500-8,000 (USD 70-124) from their kitchen gardens each year. There are also indirect benefits that improve the climate resilience of the village.

“Due to chemicals we used, the fields had to be watered every three to four days, but with organic manure we just need to water them every 15 to 20 days. That saves a lot of our effort and money,” says Bahuguna. “Plus with urea, the soil became hard and we needed to hire equipment to till the soil frequently, but with organic manure the soil remains loamy, porous and produces such nice tasting vegetables.”