By Shweta TanejaonSep. 20, 2017inLearning and Education 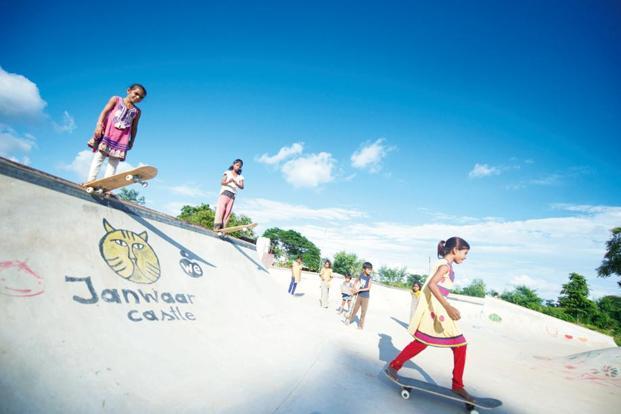 Skatepark in Janwaar village had just two rules, ‘girls first’ and ‘no school, no skateboarding’, the rest was left to the kids. Photo: Priyanka Parashar/Mint

Love of skateboarding made Asha Gond, a 17-year-old tribal girl from Janwaar village in Panna district of Madhya Pradesh, the first person in her village to get a passport and travel to a foreign country. In November 2016 she stayed with a teacher in the UK for two months to learn to speak in English, something she was passionate about. All thanks to Janwaar Castle which crowdsourced the trip for her.

Janwaar Castle, which won the Digital Empowerment Foundation’s award for SM4E (social media for empowerment) in the category of community mobilization earlier this year, is a project with India’s largest rural skatepark at its core, set up in Janwaar.

Spearheaded by Ulrich Renate Reinhard, a 59-year-old German community activist, the skatepark happened by chance—over an impromptu conversation between Reinhard and Shyamendra Singh, the owner of Ken River Lodge resort in Panna National Park, in the summer of 2015. Singh asked Reinhard if she wanted to work in his home area. Reinhard suggested a skatepark and showed him a video of Skateistan, an NGO headquartered in Germany which empowers children and youth through skateboarding and education in various countries like Afghanistan.

“He loved the idea and agreed to donate land for it while I crowdsourced the funding to build the park,” says Reinhard who developes community projects with the internet at its core. She posted on her social media accounts and blogs, asking for artboards, or skateboards with artwork done by renowned artists from across the world, and received 19 of them. The artboards were then auctioned in October 2015 on eBay with the help of a German NGO skate-aid and Reinhard was able to raise $17,000 for the Janwaar Castle project. In April 2015, the skatepark had its grand opening and the project Janwaar Castle Community Organisation was formally turned into an NGO in January 2016.

Janwaar, which lies 6km from Panna, has no sanitation, no cellphone coverage, no jobs, a school up to class eight and electricity a couple of hours a day. The village is strictly divided along the lines of caste, gender and class. The idea of the skatepark was to trigger change and empowerment in this setting, by introducing something innovative. “Janwaar Castle was a social experiment without any defined outcomes or targets that aimed at the kids to bring in the change. We were merely mentors,” she says.

At first the kids, though curious, were hesitant. They didn’t know what to do with the skateboards. Reinhard couldn’t teach them as the avid biker herself doesn’t know how to skate. She loaded a few how-to videos on six tablets and let the children watch and learn skateboarding. “They fell and rose again, took a risk, learnt how to balance and fostered a healthy competition,” she says. The skatepark had just two rules—“Girls first” and “No school, no skateboarding”—the rest was left up to the kids. As village politics played out, children started to fight with each other. At first, upper caste Yadav kids did not want to play with the lower caste tribals in the park. Reinhard, foreign to issues of caste, had to deal with this sensitively. She kept the intervention to a bare minimum by insisting that the children choose their own leader and decide amongst themselves who will keep the keys to the locker where the skateboarding equipment was kept. Reinhard and the Janwaar Castle team observed from the sidelines and intervened only when the kids themselves couldn’t resolve the issues. Within a year of the introduction of the skateboard park, school attendence had increased and the kids became more confident.

Armed with her iPhone and Macbook Air, Reinhard posted rural stories on her Facebook profile and on the Janwaar Castle Facebook page to draw media interest, volunteers and tie-ups.

“Internet has enabled us to collaborate and co-create at zero costs and has huge transformational power,” says Reinhard. The experiment has built confidence and self-esteem among the children. It has also shaken deep-seated traditional boundaries based on caste, class and gender. “The place is now owned and run by the kids. It’s theirs. We are simply no longer needed,”  Reinhard says, stressing the need for this kind of ownership and the empowerment that comes with it.

As this article goes to print, Reinhard is heading to Europe with three skateboarders, two from Janwaar and one from Kovalam in Kerala, all of them tribals, to interact with international skateboarders, changemakers and empower them to become leaders and guide other children in their villages.

While on this trip, she also hopes to find funding for two more skateparks in rural India.

Barefoot skateboarders of India – A sport which has long been identified with urban neighbourhoods across the world, is being used in Janwar village in Bundelkhand (Madhya Pradesh) as a trigger for social change. Ulrike Reinhard – a German national – established a skate park here in February 2015, with the help of a few Indian and international skateboarding organisations.