Back to the earth, the hard way

By NIKHIL ROSHANonSep. 29, 2015inFood and Water

In the early hours of a Friday in July, as the market town of Singtham in South Sikkim still sleeps, the hills overlooking it are astir. In the darkness, one sees flashes of light moving down the slopes, too large to be fireflies. As dawn slowly breaks, silhouettes of men, women and children carrying flashlights become apparent. They make their way down stony trails on hillsides, stooped under sacks filled with ginger, corn, cucumber, leafy vegetables, cardamom, herbs and gourds. At the mouth of the trail on the side of a road, they unload their sacks, which could weigh as much as 80 kilograms, and wait for a jeep to pick them up along with other farmers from the neighbourhood. In an hour or so the jeep will be loaded with sacks and people and on its way to Singtham’s weekly market. Jeep being loaded with farm produce near Sanni Village in West Pendam for the market in Singhtham, Sikkim.

As we wait for the jeep to arrive, 42 year old Dilip Rai of Sanni village in West Pendam introduces me to his neighbours and extended family, all waiting with their meagre farm produce. There is a woman with a tin can of milk, another with a small bag of radishes and the famous Dolle chilli, which is native to these parts, and Rai’s own mother with some corn, huge cucumbers and a string of medicinal flowers in demand among Buddhist monks who make a broth with it. Rai invites me to visit his farms and we trek up to a set of neat little terrace plots freshly sown with herbs, pulses and okra in between young orange trees. I ask him about the fruit fall and pest situation that has been affecting the Mandarin orange plants of late. The Sikkim government propagated it amongst farmers as a lucrative cash crop over recent years and it brought good harvests to farmers until recently. “Oh yes, we’re all suffering the same fate. But I’ve found a way around it, for now,” Rai says and promptly takes me to his nursery where he has been crossbreeding the plant with silver birch to make it pest resistant. He picked up the skill at one of Sikkim’s many livelihood schools 3 years ago, when he was chosen as a model farmer and representative of his block, and trained. At the schools, farmers from various parts of Sikkim are taught to shun chemical pesticides and fertilizers and turn back to older, healthier practices of natural farming.

Under the banner of the Sikkim Organic Mission (SOM), constituted nearly 5 years ago, the small Himalayan state has ambitiously avowed to be one hundred per cent organic by the end of 2015. While many in the state may argue that the ruling government is merely capitalising on a farming culture that always existed there, matters are not as simple as that. Under the certifying body Agriculture & Processed Food Products Export Development Authority’s (APEDA) watch Sikkim is poised to enter a global market for organic produce, and the conditions of entry there are hard even for a state that is an old hand at natural farming. “Countries like the US don’t even allow natural manure to be used to nourish their organically grown crops, which is a staple fertilizer in India. So it’s obviously going to be difficult for us to break into those markets,” confesses S. Anbalagan, Executive Director of the Mission. But one doesn’t have to think that far ahead when looking at the inspiring farmers’ markets close to the capital, Gangtok. Men and women come from the nearby villages at the break of dawn with tiny sacks of cucumber, squash, chillies, radishes, gourds, corn, chhurpi (cheese) and an array of leaves and fruits that always find eager takers. “We know that these vegetables are better for our health so we don’t mind paying the extra price for it,” reveals Rakhi Choudhury, a shopper at Ranipool’s weekly market on the outskirts of the capital, Gangtok. On Sunday morning, the market is abuzz with buyers who come specifically in search of local organic produce. The untapped market for Sikkim’s vegetable and fruits is perhaps right in its own backyard.

Travel uptown to the bigger Lal market in the heart of Gangtok, and the scenario is a bit different. Flooded with vegetables and fruits from the plains of Siliguri, where farmers can use pesticides and fertilizers abundantly, this is where the everyday buyer finds the real bargains. The Sikkim State Co-operative Supply and Marketing Federation (SIMFED) store here finds far less takers. Their shapeless, warty, pricier nevertheless more healthy produce loses out to the cheaper, shinier cousins.

Conversely, Sikkim’s own produce finds its way to outside markets with great difficulty. “Go to the goods loading area of Siliguri station early one morning and you’ll find out why,” a SIMFED employee says with dejection. “The trains going down to Kolkata hardly halt long enough for us to load our produce. And with the lack of adequate storage facilities or food processing units in this state our products perish and go wasted.”

All that seems ready for change now with Prime Minister Narendra Modi’s endorsement of the Sikkim organic model as something to be emulated all over the northeast and in other states across India. A flush of funds has also been announced to build mega food parks, the first of which has been built in Assam recently. A 2000 crore rupee corpus fund to be handled by NABARD has also been announced to provide loans at cheaper lending rates to entrepreneurs who wish to set up food processing units across the country.

But local leaders say that the funds allocated for encouraging organic farming are a pittance compared to the needs of the states. “100 crore rupees is what is currently allocated to all the north-eastern states together, to boost organic agriculture, which quite frankly, is nothing. We need at least five times that amount for any serious progress to be made,” says P D Rai, Lok Sabha member and spokesperson for the ruling party, Sikkim Democratic Front. “Right from the Prime Minister’s office down to us, the task at hand is to energise the youth of this region to go back to the land,” Rai reminds us.

The certification work, in the meantime, is steadily on its way to make Sikkim officially organic. Out of a total of 74000 hectares of farm land, over 50,000 hectares have already been surveyed and found to be complying with the ‘no artificial pesticides and fertilizers’ norm. Thanks largely to Chief Minister Pawan Chamling’s benevolent dictatorship that imposes fines up to Rs 1 lakh and 3 months imprisonment on farmers who flout the norms. Collective farming has in fact been given a whole new meaning here. The Internal Control System used by the Organic Mission for certification brings farmers’ holdings on a village or block level into collectives so as to ensure that they can keep a check on each other and avoid seepages between farms. “Even one farmer using chemicals on his soil can risk the whole state its organic tag,” explains SOM Executive Director Anbalagan. Making the whole project all the more nerve-racking is the APEDA accredited tracking software Tracenet through which consumers can track down the exact source of their purchases down to the specific farmer from whose land it originates, making the adherence to norms all the more crucial. On the other hand, it serves to protect the Sikkim brand. This is a concern especially when after all the hard work put in by farmers to create their meagre produce, and transporters braving landslides and other roadblocks to get it down to Kolkata, the goods get labelled Darjeeling products.

The conversion to completely chemical-free cultivation has been hard on most. Add to that the vagaries of climate change and farmers, especially those with small holdings and practicing subsistence agriculture, are on a very rocky boat. Mandarin oranges weren’t the only crop to suffer in recent years. Large cardamom, of which Sikkim is the primary producer in the country and a major revenue earner in exports, has taken a severe beating due to blight that scientists say is a direct outcome of climate change. Land under cultivation for this crop has been reduced by half all over the state. State officials have advised farmers to leave the infected soil fallow for seven years to allow nature to heal it — time enough to put any farmer on the street.

This is where aligning Central Government schemes such as the issuance of Soil Heath Cards (SHC) to farmers, with State programmes is crucial. The card is yet to reach the farmers of Sikkim who would then be able to receive inputs from the state on how to improve their soil. But head 13 kilometres further up the road snaking through the hills overlooking Singtham to Duga block, and the road gives way to a 2 kilometre rough trail that leads us to a flourishing but cut-off farming village called Budang. Here farmers are not waiting for the state’s help and have found a way to save their precious cardamom and keep it growing by interspersing it with potato.

Farmer transporting potatoes from his farm on the hillsides of West Pendam in time for the weekly market at Singtham. An old craftsman cuts bamboo in a bamboo grove to take to his workshop to make baskets. Budang’s remote location, higher altitude weather and rich agriculture have made it a prime location for the state’s plans to develop agro-tourism and officials such as Anbalagan have been scouting the area to see how best to develop it. Some residents, already hopeful, have begun building guest houses to accommodate future tourists. But the residents rue the fact that there is no road to bring them up there. On our way back down, we once again see a familiar sight. It’s Thursday evening and the eve of the weekly market in Singtham. On the side of the dirt road two traders from town are waiting near their pick-up truck. They have hoisted a weighing scale on a make-shift bamboo frame and are hopeful at the sight of an old farmer coming down a hillside path. On his back is a sack full of freshly harvested ginger that could make its way as far as Germany if it makes the grade. 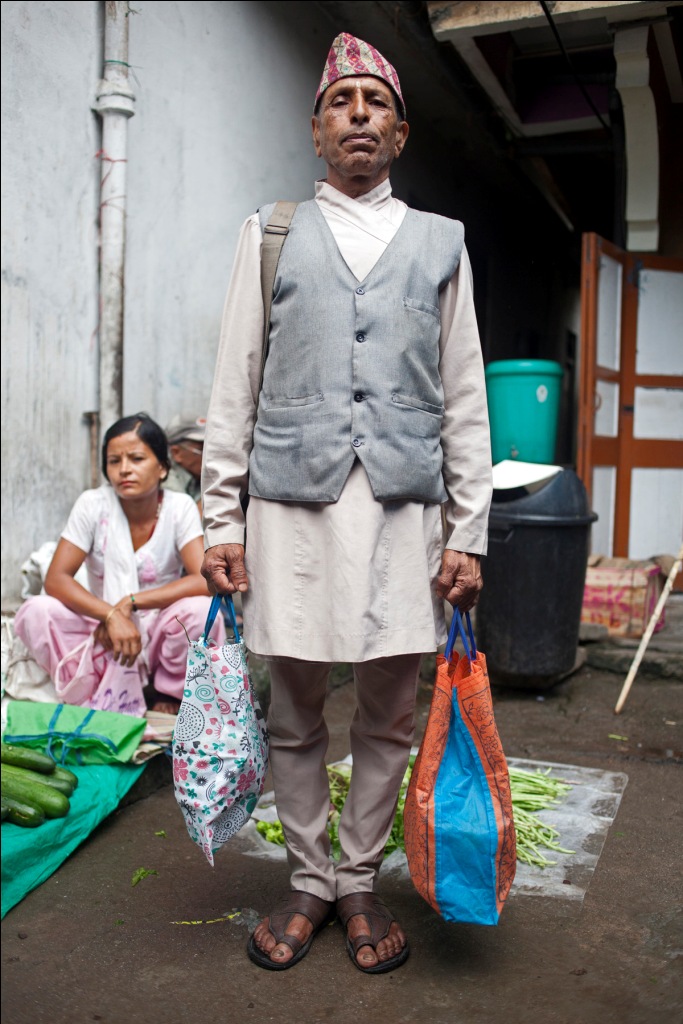 “85 kilos,” the traders declare, beaming with pleasure after heaving and huffing to put the sack on the weighing scale.  By then the old farmer is already on his way back up to bring 4 more such sacks from his plot. Poised to be the change-makers in India’s beleaguered agricultural sector, the organic farmers of Sikkim could certainly use a little help to get their precious produce out more quickly and efficiently.