A pond, a community and a forest fair – The story of Mesar Van Kautik

By Shiba DesoronDec. 07, 2018in Uncategorized

After a few hours in the hot still air of the Old Delhi Railway Station, perched on a small corner of a bench laden with babies, ladies, suitcases and old sleeping men, I took an overnight train reaching Kathgodam in the early hours of the morning. This is where the hills begin and trains go no further. After a few hours of waiting at the station I was in the back seat of a shared taxi that was carrying nine adults and 4 infants to the high Himalayan landscape of Munsiari. And soon enough, as the taxi set in motion, as the shrill music began, and as most of my fellow passengers started drooping with sleep, I got my signature foolish wide grin. My Munsiari grin.

I was coming right after wrapping up work for the time-being in North Andaman. I had made sure that I would reach the mountains in time to be part of Mesar Van Kautik, the annual village festival that has been organized for the past twelve years. As a person who had been associated with the place and the people of Munsiari for the past five years, the festival was important to me. There is a story behind the festival and what makes it truly unique.

It all began with a pond on a mountain – Mesar Kund.

The pond, ancient, beautiful and sacred, was shrinking. The stream feeding it had changed its course over the years, leading it to dry out. Its sacred nature meant that there was a taboo on removing the invading green plants which were reducing the flow of water, preventing the outflow of silt and reducing oxygen availability – a process called “eutrophication”. The shrinking of the pond to a fraction of its original size had created an open space, a meadow of sorts, in that wooded mountain landscape and the once permanently flowing stream, Mesar Rauli, had stopped flowing for a few months each year, alarming people.

The year was 2004 and the condition of the pond was being discussed in the Van Panchayat (village forest council) of Sarmoli located just below the pond. When the Sarpanch Malika Virdi raised the issue, many voices joined together in acknowledging the need to do something about it. And soon enough, people of Sarmoli and the adjoining village of Shankhadhura had gotten together on the meadow and started digging a new pond. The beginnings of a new pond in 2004 (photo Malika Virdi)

The digging activity, though financially supported by Foundation for Ecological Security in 2005-06 and by the Forest Department between 2007 and 2010, was essentially grounded in the act of shramdaan or voluntary labour, a practice inherent to mountain culture, but often needing triggers and initiative.  For a long time, all that came out of the earth was muck. A couple of years and many sessions of shramdaan later, the shape of a pond began to emerge. It was a small pond, a humble one, but a labour of love. At the forefront of this effort were mostly children and women. Men followed. But one must not think that the digging activity was all work and no play. These also became occasions for laughter and picnic lunches. ‘It was then that we thought we could have a mela here’, said Malika Virdi. ‘A mela that would be moulded by what we wanted. That would not centrally focus on religion, or on selling things but simply on having fun. And that would focus attention on us – our place, our people our interests.’ And so the Mesar Van Kautik, also known as Mesar Forest Fair, was born in 2007. 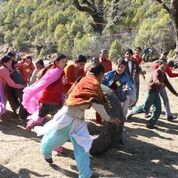 For the first two years, the festival was held in the month of January but subsequently its timing was shifted to summers to avoid the logistical challenges of organising such an event during snowy winters. Every year the excitement around the festival begins months in advance. To make sure that everything runs smoothly on that day, an Aayojan Samiti (organising committee) is formed,  of volunteers who coordinate different activities (like food, play, poster-exhibits, music, stalls, safety, donation collection, programme coordination) for the event. The expenses for the event come from local people’s contributions collected over a couple of weeks leading up to the mela, or on the day of the event.

Since the run up to the mela is towards the end of a traditionally dry season, the pond has less water and the weeds and other plants are growing in abundant profusion. So people, particularly kids of the Jungli School, trek up for many Sundays before the fair for a community-clean-up. They get into the water and skim out the suffocating upper layers, as well as any garbage that may have found its way inside. The work also includes cleaning the surrounding meadow and forests and the approach paths to the pond. The clean-up becomes a time not just to do something collectively, but also for enjoyment. Such days are ended with a bath splashing around in a nearby fresh-water pool and a nap in the sun after a picnic meal. Adults also work for a few Sundays, de-silting the pond as much as feasible and blocking the water exit so that the pond starts to fill up. Records are kept of all the people who volunteer and specially the younger volunteers are at times publicly feted at the mela for their contribution.19 years old Alka Rautela who has been volunteering for Mesar Kund since she was 5 years old, recollects:

“When we were kids, we used to go for shramdaan at Mesar Kund, plant trees and clean the village. The festival is a time for having fun through dancing, painting, story making and bird-watching.  I believe that doing something collectively really builds our character and makes us think more closely about our village and our environment.”

Over the years, the shape and the structure of the mela has evolved into multi-day festivities with the name Himal Kalasutra, organised by the local entities of Himal Prakriti, Himalayan Ark, Maati and Jungli School along with the community of Sarmoli. Through Himal Kalasutra, a diverse set of events like food festivals, trail running and mini marathons, instagram workshops, yoga camps, story-telling sessions and bird-watching walks lead up to Mesar Van Kautik. These seemingly unconnected and wide-ranging events are united by the enthusiasm of the participants and the facilitators. Many of these facilitators are people who may be coming from a different part of the country but have had a deep connection with the place and people of Munsiari.

An example is the artist and photographer Diba Siddiqui, who has been coming to Munsiari for nearly three decades, and facilitated art-work and story-telling during Himal Kalasutra multiple times. Given below is a translated excerpt from a letter sent by her, during the 2017 festival:

My dear friends in Munsiari

Today you must have all come together at Mesar Kund for Mesar Van Kautik. I have had so many opportunities to be a part of this festival, to dance, sing, play and meet everyone. People from different villages of the valley come here to meet, play and laugh together. It is a precious space for sharing good and bad news of the past year and cementing old bonds. My own relationship with Munsiari is also very dear to me. Living here, roaming around here, working a little here and being a part of Himal KalaSutra has been a source of peace and inspiration for the soul…..

I am grateful to all of you- my friends at Maati Collective, the kids at Jungli School, and the community of Sarmoli- Shankhadhura for making me a part of your community. Bird watching festival, facilitated by Ashish Kothari has been a regular part of Himal Kalasutra since 2014. (photo Diba Siddiqi) 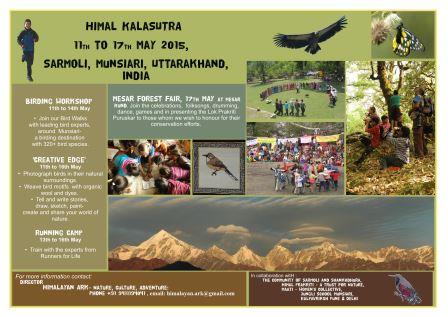 On the day of the festival

The festival begins with a dushka (the folk dance of Munsiari) to bagpipes and dhol at the meeting point in Sarmoli. From there, people trek up to the pond while singing a folk song about Mesar to the beat of traditional drums. On reaching the meadow one can immerse oneself in the festivities of the food and craft stalls, the photo exhibition, dancing, games, and other miscellaneous events. The photo-exhibition is a regular and special aspect of the forest fair as it displays a wondrous collection of photographs giving a sense of the local history of the village, the evolution of the festival, the biodiversity of the area and various relevant environmental and social issues.  Another regular and much-loved event in the festival has been the tug of war which sees enthusiastic participation from all over by men and women, young and old. Consciously, no prizes are set for any of these games so that the focus is on participation rather than winning.

Apart from being a platform for coming together for leisure, it has also been a place for felicitating local heroes every year through the Lok Prakriti Puruskar. This award is a humble acknowledgment of the efforts and work of people who have worked locally with the community in the region in areas of ecology and conservation. For instance, this year’s Lok Prakriti Puruskar was given to late Shri Jagat Singh Rawat of Ugrali, a retired school teacher and environment-lover who had made significant contribution to conservation of forest commons and had lead the opposition to a series of dams being built in this valley, including one by NTPC that would directly have impacted his village. Through this struggle that finally was successful in sending NTPC packing, he also questioned the value of the large-dam-development model of the region. Just like the origins of the new Mesar Kund, the Mesar Van Kautik is a fascinating case of addressing pertinent village issues while providiing space for joy and laughter.  We can take inspiration from this example of how an activity designed with love and care can be used to provide a continuity to collective processes of knowing, sharing and doing. In that way, Mesar Van Kautik is truly a mela, a coming together of ideas and actions that engage with global processes and knowledge in general, while keeping the roots grounded in the local context of the mountain village.

This festival set an example that what matters is to preserve nature. Whatever is the human activity, whether religious, scientific, economic or entertainment, it must be with a constraint of, “preserving Nature”. And this can be achieved only with collective wisdom.