We are what we eat!

By Madhuri DasagrandhionSep. 10, 2018inEnvironment and Ecology Once upon a time, not so long ago, there was an era when our grandparents and great grandparents would thrive. This was the time when nobody heard or spoke of obesity, diabetes, blood pressure or complained of any health issues and ailments that have become synonymous with the current era. In the past three decades, overall well-being and staying and eating healthy have become a distant reality. Sticking to the basics and being in sync with the nature, especially when it comes to choosing the food to eat, are what our grandparents did and that’s something we’re lacking now. Keeping life, and food, simple is what one should have as an agenda. As we are exposed to many delicious delicacies, we tend to taste them all, but have you ever wondered about the kind of contamination the ingredients that go into each dish that we consume are exposed to.

Yes, there are a few people, including NGOs and farmers, who realised this as a reality, are trying to spread awareness about going back to the roots/basics of nature and natural ingredients/foods. They are successful to some extent, and many are choosing the older methods in growing the food ingredients and also method of their preparation.

It is not just individuals and NGOs that have understood the benefits of going back to basics when it comes to food. Quite a few restaurants in the city too have realised the benefits of eating food out of a banana leaf and are serving their customers not just food but an experience too. Similarly, drinking water in copper or brass glasses/mugs has its own advantages – no wonder, our grandparents’ generation always followed this as a rule. Our city restaurants too have started emulating them, of late, by serving water and food in copper utensils. While the whole world is running behind the “double-refined” oils and low-cholesterol variants, a few have realised and understood that the old methods of oil extraction were the best. Unni Anand from Kerala, who is about to launch a cold-pressed oil mill in Alwal, says: “I worked in health industry for more than 20 years, and understood that oil is one main ingredient which can wreak havoc with our health. So, I went back to our basics and understood why our ancestors were much healthier and had a good lifespan.” These days, oils are hot processed wherein the nutrient benefits are gone while processing, and what we’re consuming is filled with chemicals and preservatives, which has side-effects too.They make us prone to new generation diseases like heart attack, joint pains, skin-related issues and neurological issues, adds Unni Anand.

“In hot processing, they add Hexane to seeds before they are crushed in the machine, to ensure maximum oil is squeezed. But, the side-effect of it is that it makes the temperature levels go up and results in loss of the nutrients. During filtration process, used to get crystal clear clarity, chemicals are added again. Thirdly, adding preservatives to extend shelf life making it dangerous for a human being, in the long run,” explains Unni. He says that on an average to get five litres of coconut oil, we need around 10 copras (dry coconuts) in cold-pressed method, but, if hot-pressed, the same amount of copras can extract up to 20-30 litres. Nowadays, we have seen many NRIs coming back to their motherland and taking up farming jobs or basic jobs of sustainability. Boppana Nageswara Rao, an instrumentation engineer who was working with a petroleum company in Abu Dhabi, left his job 30 years ago and switched on to natural farming methods. It wasn’t recognised much then and landed him in losses, but now, this method is in demand.

Apart from paddy (Jeelakarra Biyyam), turmeric, red gram, and fruits, he also does essential oil extraction. “We are cultivating in a real organic manner, and we make our own organic manure and protect the crop from pests by adding neem powder to the soil. And we also prepare our own devamrutam – a healthy organic manure to our crops,” says Nageswara Rao. His land has a certification from Vedic Organic Certification Agency, (VOCA), which has been accredited by the National Accreditation Body of India through APEDA. 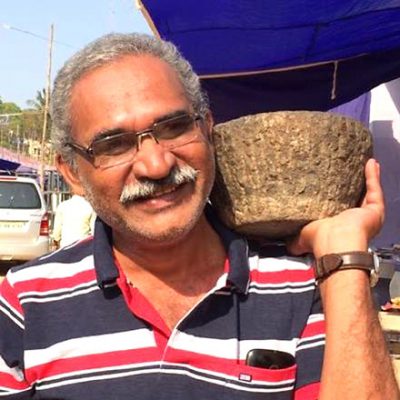 Better late than never is the policy that Vasireddi Venugopal prefers to follow. An author and an ex-journalist, Venugopal started promoting Roti pacchallu (pounded chutneys) since two years. “I always felt that the pacchadis (chutney) made by my mother and elders in our family would taste much better than what we were making at home now. Somehow, I thought I was missing that taste, and I also realised that a lot of family interaction happens while preparing the chutneys,” says Venugopal, a social media freak who initially posted his roti pacchallu idea on Facebook. The idea became viral and reached many. “I also made sure that the one who visited my bookstall during the book fair would definitely try their hand on the rolu-rokali (the grinding base and stick). I also brought out a book on this theme, where I personally prepared 200 types of pacchallu including different leafy vegetables like Guntagaragaraakuand Nalleruaaku which are found in villages on the banks of the fields,” adds Venugopal who uses leafy vegetables primarily used in the Ayurveda to make chutneys.

His book not only consists of pacchadi-making, but also the experiences with the family, memories linked with that recipe, poems, cartoons, etc. After doing a lot of research on this, Venugopal still encounters people who ask him ‘Can we make this pacchadi in mixer?’ and he just laughs out loud. There are nearly 500 women farmers who are working in collaboration with Deccan Development Society (DDS). In spite of the world moving ahead with modern instruments, machines and techniques in farming, these women farmers from Telangana are still sticking to the basic farming methods like ploughing their fields with bulls.

“The farmers say that crops like millets do not need deep ploughing, and the tractors dig deep. And if the tractors are introduced, there are many chances that the soil becomes hard and it also pollutes the environment,” says Tejasvi Dantaluri, communications coordinator, Deccan Development Society.

There are a few plants which are not watered, nurtured, taken care of or sold in the markets. These are often treated like weeds and are plucked away; but the recent workshop organised by the society was an eye-opener to urban dwellers. “These so-called weeds are multiple times more nutritious than the marketed greens. They are available free for the poor. Probably, it’s God’s way of offering the best nutrition to the poor who cannot afford to buy nutritional stuff in the market. The uncultivated food plants are voluntary plants – the right plants in a wrong place. The rural poor who understand their benefits the best refuse to call these “nature’s benevolence” as weeds,” says PV Satheesh, director, Deccan Development Society.