More than a decade after Goa’s pioneering children’s courtroom, the rest of the country is slowly waking up to the idea

It’s 3.00 p.m. on an overcast afternoon in Panjim, Goa’s capital city. In the middle of a complex of government buildings there is nothing that immediately distinguishes Shram Shakti Bhavan, a grey-and-blue five-storeyed structure that houses a variety of government offices.

A sign on the first floor points to the Goa Children’s Court that has been in operation here since 2004. An outer room with humming fans and various cubicles and cabins that house clerical staff is in keeping with the general atmosphere of a government office, but walk into the courtroom itself, and it seems a world apart.

For one, it looks nothing like an ordinary courtroom. Substantial portions of the wall and ceiling are painted a bright pink, giving the whole room an informal feel despite the rows of wooden-backed chairs along the floor. Two long benches are placed along the windows to one side and it is only when a lawyer turns to ask a question of a young man sitting there that it becomes evident they are actually stands for the accused. 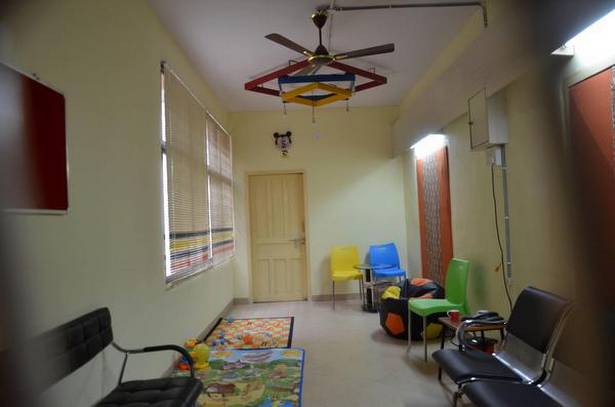 At the front of the court, sitting around a low table is the judge, a public prosecutor, a stenographer and the court’s police officer. None of them is wearing uniforms and the scattering of lawyers around the courtroom don’t wear black robes. In the centre of the room are two large curtains, running from floor to ceiling, that are now drawn apart.

“If a very young child is brought to the court, the curtains are drawn so that the rest of the courtroom cannot see the proceedings,” explains the court’s police officer. “The child may also get scared if he or she sees the accused, so it’s essential to keep them apart and bring them in separately.”

The Goa Children’s Court has been working for 13 years now, but the idea of dedicated courts for cases of sexual abuse and other crimes against children seems to be catching on in other States only now. This year alone, similar courts are set to be inaugurated in Karnataka and Tamil Nadu, while Madhya Pradesh, Uttar Pradesh and Assam have also announced plans. About four years ago, Delhi introduced its first court to deal with the deposition of vulnerable witnesses and it was along these lines that a special court was set up in Telangana earlier this year.

The creation of dedicated courts to deal with sexual abuse cases against children is laid out in the Commissions for Protection of Child Rights Act, 2005, and mandated by the Protection of Children from Sexual Offences Act (POCSO), 2012. The latter lays down rules to be followed while dealing with young survivors and witnesses. This has probably necessitated the move by various States to have special children’s courts.

Back in the late 90s though, there wasn’t that much of a conversation around crimes against children, especially sexual crimes, and the movement to address this lacuna grew out of Goa. The State was growing as a tourist destination for foreigners, but with it came concerns of paedophilia that had earlier been reported from countries like Thailand and Sri Lanka. 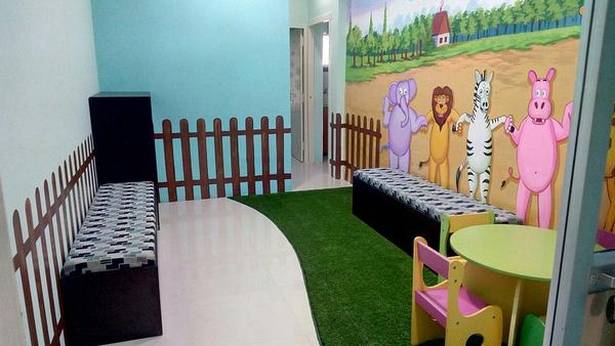 The bizarre case of Freddie Peats brought the issue into sharp focus. Peats, a foreigner of Anglo-German descent, ran a large children’s home in Goa and was found to be involved in several cases of sexual abuse of children. In the years that followed, several NGOs in Goa were galvanised into working on a law to protect the rights of children and it led to the pioneering Goa Children’s Act, 2003—India’s only State-level child welfare act.

One of the NGOs that worked on this law was Stop Child Abuse Now (SCAN), and one of its directors, Audrey Pinto, explains that the law came into existence after several rounds of consultation at the taluka level, which involved various stakeholders to define what constitutes crimes against children and what the punishments should be.

For the first time, the Goa Children’s Act defined the scope of crimes against children, such as incest, rape, sexual assault and grave sexual assault, and went further to define the rights that every child must have. It’s no coincidence, Pinto says, that the language of the POCSO Act borrows heavily from here.

One of the Act’s major provisions was the setting up of an exclusive court to deal with crimes against children. The idea, says Emidio Pinho, SCAN’s other director, was to protect the child from the confrontational process that courtrooms engender.

“From the start, the idea was to have a process where the children did not have to encounter a situation where a judge is seated on a dais and talking down to them while they were giving difficult testimony; and where the accused was not present while they were doing so,” he explains. It is for this reason that the curtains came in.

While the basic rules were put in place, several other practices were still rudimentary. Pinho says that despite the designated premises, cases that came under the Act were, for many years, heard only once a week by a visiting district judge.

This then became twice a week, then went back to once a week. Interestingly, in the interest of keeping things child-friendly, the court used to initially function with a jury comprising a judge and two social workers, something for which Indian jurisprudence had no provision. It was later challenged and struck down for this reason. Ten years after it was set up, after a public interest litigation (PIL) filed by Pinho, the Goa Children’s Court got its first permanent judge in September 2014.

Learning on the job

When she first took charge as full-time judge of the court, Vandana Tendulkar had only a peripheral knowledge of how to handle cases against children. “What had happened here and in every other State after 2012 was that under the Act, several district and sessions courts were designated as special courts under POCSO,” she says. This means that in addition to regular cases, a POCSO case was wedged in between and suddenly the judge had to change her mindset. “I could be hearing a long case about land acquisition and then suddenly a case under POCSO would come up. I would have to think completely differently, because POCSO has a specific set of rules. Only the judge is allowed to ask the witness or the survivor questions, not even the prosecutor. The questions have to be simple, and the cross-examination cannot be lengthy. The entire language has to change,” she says. She heard similar concerns from other district and sessions judges.

Special courts can be one part of the solution, but experts say it has to be part of a more comprehensive change. “It is good for the child to have a more enabling process, one that is different from the archaic functioning of a regular courtroom,” says Vidya Reddy, executive director of Chennai-based Tulir Centre for the Prevention and Healing of Child Sexual Abuse, but people need to take ownership at all levels. “It can’t just be one organisation or individual pushing the initiative forward.”

For two years after taking over, Tendulkar had to deal with a huge backlog of cases since the court functioned only weekly. As she got used to the cases and the process, she began to improvise and innovate, to look at the court not just as one space but part of a larger, holistic process. “The first thing was to make sure that all appearances by children were scheduled in the afternoon so that they did not interfere with school,” she says. Then, she worked on how to make the children more comfortable.

In Tendulkar’s office in Shram Shakti Bhavan, an entire shelf is lined with stuffed animals, toy cars and more. “I must be the only judge with more toys than books in her office,” she laughs, adding that her table is often laden with sweets and juices. The toys were donated by Funskool after they were invited to see the court’s functioning.

“We tried to keep a separate waiting room for the children where they could play and feel comfortable during deposition. The most difficult part is when they are asked to identify the accused and we open the curtains a little. The idea is that they should feel comfortable with all of us, with the staff, with me as a judge, to tell us freely what happened. Sometimes it works, sometimes it is more difficult,” she says. Either way, the kids get to take a toy back with them.

Then came structural changes to the courtroom itself. The walls were painted pink and the judge’s table was moved so that the child could sit near the judge rather than across from her. Toddlers could sit right next to the judge. And thus, over a decade into its existence, the Goa Children’s Court once again became a work in progress. Tendulkar hopes she can get enough funds to set up an actual waiting room rather than using the prosecutor’s office. Work has already begun, and she also hopes to get a small pantry and fridge where she can keep food to give waiting children. She has come to realise that every little detail counts.

It is with a twinge of regret then, that she pulls up pictures of the facilities set up by the Delhi district courts for vulnerable witnesses—spanking new facilities where children are made to wait in a separate room designed like a creche with toys and colouring material; the courtrooms have one-sided glass booths so the accused can see the proceedings, as is their right, but the child does not have to see the accused.

These ideas came from discussions at judges’ conferences, and Delhi was the first to initiate them. There are even separate lifts there, Tendulkar points out, but rues that Shram Shakti Bhavan in Goa still has a common doorway.

For now, working with the more modest infrastructure, Tendulkar continues to lobby for more facilities—permanent legal staff, a full-time counsellor to address the trauma the children go through, and ultimately, a bigger facility. “This year, when the Karnataka government wanted to set up a similar court, a team from Karnataka visited to study the workings of this court,” she says. She is trying to impress upon the Goa government that the court is an important, even pioneering, model that deserves more care and attention.

In an office in a two-storeyed house in Panjim’s Altinho area, Pinho and Pinto continue to lobby. If the working of the Goa Children’s Court and its associated organisations sometimes feels like a constant series of additions and improvisations, that’s because it is fuelled by a constant stream of letters that SCAN and Tendulkar determinedly send to every relevant government department.

In 2014, for instance, SCAN got permission to run the Victims Assistance Unit (VAU) that assists the children’s court. The unit was envisaged in the Goa Children’s Act but was never set up, till a PIL filed by Pinho in 2010 got the ball rolling.

Pinho says they work on a system whereby teams from VAU, a lawyer and a social worker go to the police station the moment a case involving a child is reported. In cases of sexual abuse, the child is also brought to a separate facility run by SCAN for medical examination and recording of statements.

Last July, SCAN also got government sanction for a ‘going to court programme’. Law students from V.M. Salgaocar College of Law would accompany children to court and assist them and their families with the process.

The idea, Pinho says, was to create awareness and sensitise law students. Much has been achieved, he says, but much is yet to be implemented.

The battle is to protect the integrity of the Act and to continually innovate with practices that can be a model for other States.