Thanks to Zaheerabad, Nagaland ‘rediscovers’ millets

A remote village in the North-East has rediscovered and is making attempts to reclaim its culture, after being re-acquainted with the same at the most unlikely place, Zaheerabad of Medak district.

The Chizami village of sparsely populated Phek district has become the experimental ground for cultivation of millets since 2009, when a contingent of the North East Network, a women’s rights organisation from the North-East, was in the city to attend the Convention of Biological Diversity.

Team members from the Network were taken on an exposure trip to the Pastapur village of Zaheerabad mandal during the summit, where millet cultivation was being promoted at a large scale by the Deccan Development Society. Inspired by the success stories shared by women farmers, they took the message back to Nagaland.

“Millets had been part of the culture of Nagaland, especially of the Chakhesang Naga community, which traditionally celebrated a weeklong millets festival every year. However, millets took a beating for the last two to three decades with the onslaught of rice and wheat, and the festival was not being celebrated anymore,” said Stephen from the network, who accompanied Nagaland farmers to the city for participation in the National Convention on Millets organised by Millets Network of India (MINI).

Though Foxtail Millet (Korra) was cultivated and consumed by Nagaland people extensively, it has become rare after green revolution when rice became the staple of many communities across the country. Coupled with low demand were increased attacks by pests and birds, which drove the millet out of mainstream agriculture. The North East Network revived millet farming in the village, and organised a millets festival on August 30 this year, attended by women farmers from 11 villages of Nagaland. “Participants came down from other States too, such as Manipur and Meghalaya, and exchanged millet seeds,” informed Mr.Stephen. 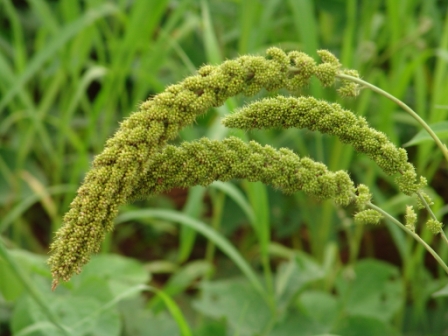 Taking it forward, the village council of a neighbouring village, Sumi, passed a resolution urging farmers to cultivate millets. “We can see increased cultivation of millets in Nagaland and Manipur due to this initiative,” Mr.Stephen shared.

Visiting farmers Kezukhalo Lasuh G.B., Thenole Anole and Wenyi Tsosu, however, said birds continue to be a problem in cultivation of millets.