The danger of losing our traditional knowledge forever seems imminent. Sadly, it’s consolidated mostly in rural areas, and mainly where forest cover is high, but seldom does it go out in open or gets transferred to others. The already diminishing chain of transferring the knowledge to the next generation is a matter of grave concern.

Experts of community health and Vaids, the practitioners who possess traditional knowledge are aware of the imminent danger.

In a unique initiative, to address that, CGNet Swara organised a specialised two-day camp – known as Swasthya Swara (Health Swara) – that plans to take the parent CGNet Swara initiative to a specialised and much neglected sphere of community health. It aims to address the rural community health issues and at the same time help in protection and distribution of ancient knowledge the Vaids and other traditional practitioners possess – which is in danger of vanishing forever. 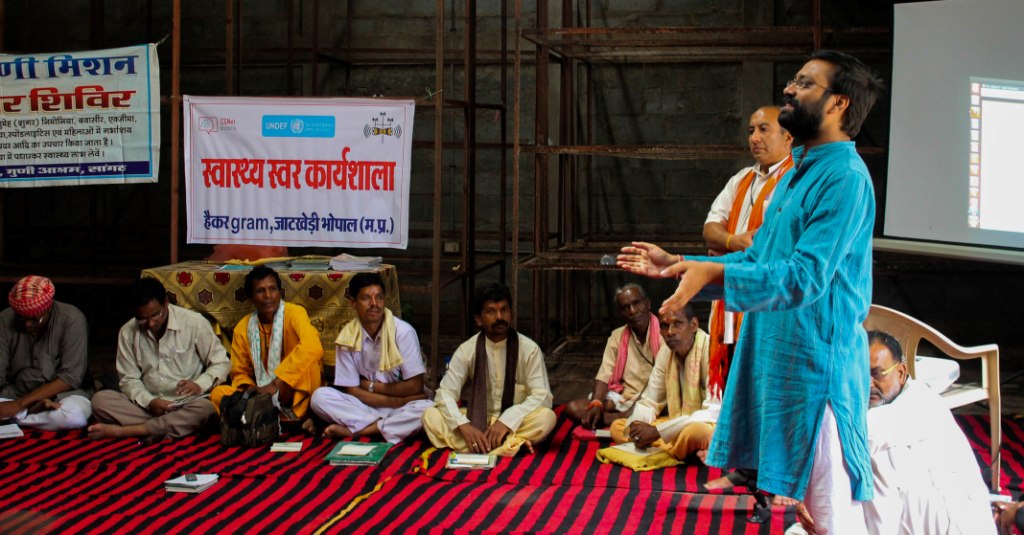 The new initiative, Swasthya Swara, will start functioning from October 2, 2013. The website is http://swasthya.swaranetwork.org

The camp brought together more than 35 Indian medical system practitioners – Vaids or traditional herbal medicine doctors, Ayurvedic doctors and others to deliberate on the issue and find a solution through the medium of Swasthya Swara. The feasibility, practicality, usability and conservation of Indian herbal medicinal system were discussed at the meet.

Practitioners of Indian herbal medicine system from different states took part – mainly from Chhattisgarh, Madhya Pradesh, Odisha, Rajasthan, the states where the tradition of Indian medicine system is rich with many of the states having a reasonable forest cover. Chhattisgarh, for example, which had the largest participants of herbal medicine practitioners, has almost 44% forest area and it’s predominantly inhabited by tribal population who have a large wealth of traditional system of healing that hardly comes out in open – and is in danger of getting extinct.

The meeting highlighted the fact that most of rural India has non-existent health care system. So the traditional medicine practitioners / vaids are the one immediately available. Also, there are many even in urban India who are not satisfied with Allopathic or other systems of medicine and want to be treated by traditional healers. The cost factor of, say, medicine systems like Allopathic plays its role as many can’t afford it, especially in rural areas. Other factor could be dissatisfaction with modern day system of treatment.

But the challenges are many, pointed out the participants, in order to reach out to the masses – it involves a degree of commitment from the traditional medicine practitioners/healers (vaids), demands a reliable and easily accessible technology that anyone could use even in remotest part of the country irrespective of his literacy level (phone). The issue of legality and legal complications arising out of treatment or tips given by the practitioner was also discussed.

It was discussed that Vaidh community should openly question their ideas and understanding if it’s in tune with science and reasoning to get more acceptability. To rule out any superstitious, extortionist or wrong claims, an editorial body was formed that will decide what kind of message need to be relayed.

Many of the Vaids made superstitious claims of treating patients, like treating on phone just by talking, curing HIV or cancer, treating snake bite using mantra. In response to that, a proactive persuasion and reasoning with Vaids was done by other practitioners to persuade the Vaids that their claim is scientifically wrong and the apparent treatment by mantra, etc is merely a coincidence. A positive result was seen and Vaids claiming supernatural powers agreed to large extent.

To root out any such claims or sideline fake practitioners, a system of easy accreditation by government was sought.

While it was demonstrated that an effective and impact-based journalism in rural areas – that CGNet Swara is already trying to achieve through its phone based citizen journalism, the planned health-based Swara demands a different modality of functioning than the parent CGNet Swara.

In CGNet Swara, anyone can make a call and record her/his message that goes through community moderation to verify the importance and rule out any propaganda before being published on CG Net Swara website as well as on Swara’s IVR – Interactive Voice Response, easily accessible from cell phone. Just a missed call to CGNet Swara is all it takes.

In the next stage, any concerned citizen can take up the recorded story towards resolution in whatever way it’s possible for them – answering the required question or highlighting some facts in response to the call or simply taking up the issue with the concerned authority if it’s a complaint. And its working reasonably well in many parts of the country.

The practitioners, in an open session, talked about their expertise, the problem they face and probable challenges which might come in future. The legal implications of giving tips and discussing health related issues on an open platform like Swasthya Swara was discussed. Any misuse by individuals and organisations, ownership pattern, patenting of unique herbal medicines and how to deal with all the issues was also discussed. It was highlighted that, in future, the chances of an economic model might come out that will benefit the practitioners working for greater public good. But the modalities will be worked out in future meetings.

On similar model, the Swasthya Swara goes one step ahead. Here the approach, as it was discussed in the meet, would be little different since the response to any call would need a certain degree of expertise – verified by govt or an editorial board chosen from practitioners – to air the answer.

The expertise of the practitioners who participated varied – treating Paralysis, Arthritis, Diarrhea, Anemia, sugar and many other health issues that are common in rural areas.

The participants were given training as to how the CGNet Swara functions – recording a call, interview or story and listening and responding to it. In unanimous voice, all the participants vowed to voluntarily contribute to the Swasthya Swara in their locality.

An election was held among the participants to choose an editorial board of 7 members from the practitioners present and it was decided that the board will meet on 22-23rd December to take stock of the functioning of Swasthya Swara and a new editorial board will be formed.

Hari Singh Sidar from Bastar summed up mood of the meeting. He said, “Swara paida ho gaya hai, waqt ke sath jawan ho jayega. Swara has taken birth. It will grow up in due time.” He also said he would turn a village in his region completely into an herbal village taking inspiration from the meeting held for Swasthya Swara.

Vaidh Awdhesh Kashyap, Bilaspur, specialists in Asthma, Piles and Skin disease. He hopes to get popularity and patenting in future with the help of Swasthya Swara.

Vaidh Lomash Kumar Bachh, Korba, Chhattisgarh, treats stone and arthritis, said he looks forward to streamlining of Awsadhi making with the help of other Vaidhs and licensing of Vaidhs with encouragement from government.

Vaidh Ramesh Kumar Tandon, Korba, said that he is basically a researcher of traditional herbal knowledge. He experiments and runs trial before using them for treatment.

Dr. AK Arun -Homeopathic Consultant, said that if we could implement Swasthya Swara, we can address the issue of community health more effectively and widely than our major hospitals have done.

Dr. Surya Bali from AIIMS, Bhopal spoke about the scope of herbal and Indian traditional medicine systems. He also promised, as a doctor in a government hospital, AIIMS, Bhopal, help from government in whatever way possible – training, monetary, accreditation and recognition.

Swasthaya Swara won’t be a market. It would be knowledge-based data archival as well as consultation system, said Lawyer -Rahul Ganguly

There is not a single institution in India which works for the progress of India medicinal system. So the initiative by CG Net Swara to introduce Health Swara would be revolutionary, said Nirmal Kumar Awasthi, Chattisgarh Prashikshit Vaidh Sangh. He also said that 90% of Chhatisgarhis still goes to Vaidh, so their importance in rural community health shouldn’t be ignored.

Vaidh Bir Singh from Bastar said that it’s not only the distribution of knowledge system of traditional Indian herbal medicinal system that is important, it’s also a conservation of herbs found in jungles is no less important. Awareness created by a platform like Swasthya Swara would help.

Vaidh Awdesh Kashyap said that Sustainable harvesting is needed to protect the bank of herbs. Besides, it’s equally important that they are distributed widely. Swasthya Swara can be the medium to do that.

Dr. Vijay Chaurasia, Dindori from Madhya Pradesh who works with Baiga sect and has written many books on them. Baigas are vaid community but they don’t share their knowledge with their progeny, so the medium of Sasthya Swara will bring that out for common public good.