‘Save Farmer’ land art by Swathi and Vijay: Reaping the art we sow

By Divya Kala BhavanionJan. 05, 2018in Livelihoods Anyone who sees some of the striking street art in Hyderabad will often see Swathi and Vijay’s distinctive signature. Now the art duo have taken their talents to the thought provoking cause of farmer crises in one of the state’s largest self-funded forms of land art.

Swathi and Vijay found the high number of farmer suicides extremely disturbing, which propelled their most recent work; an installation of sorts to make some noise on a large scale… for a large scale issue. Swathi explains, “We’d been thinking about this project for the last five to six months. The timing is important, essentially during harvest time.”

The artistic duo knew the interactions with the farmers themselves would be insightful but they weren’t prepared for the upsetting accounts of difficulty.

The next day the farming community approached us so they could pitch in. What was being done was very touching to them— after all, it is their medium and it is their story. Swathi

The pricing issue is one of the most enduring issues faced by the community. Often seeds are bought at one price while the poor crop procurement leads to poor profits for those who labour for hours on end in poor conditions.

“We saw how farmers have to toil very hard,” Swathi recalls, “knowing they have neither guarantee nor insurance on their crop. It all depends on things out of their control. And these are people who are a basis of our economy.” Such circumstances inexorably lead to disenchantment for the farmers in their own livelihood, because of the implied cheating.

Swathi and Vijay were also informed of the ratio of expenses and how fast the farmers go through everything to fuel their basic needs as well as power and diesel for their equipment. The menace of fake seeds sold in shops further adds to losses.

The thorough search for the right land led them to Kallur in Khammam which has a considerable agrarian population. “We finally found a willing farmer to lend us his five acre land. We didn’t want to create an animation, knowing the artwork will have full impact on the land itself.”

And with these thoughts in mind, Swathi and Vijay worked quickly. In just a day and a half, they worked with the land to create the word ‘save’ before burning the word ‘farmer’ over it. “The word ‘save’ took two to three hours to complete,” Swathi starts, “The next day, though, the farming community approached us so they could pitch in. What was being done was very touching to them— after all, it is their medium and it is their story.” 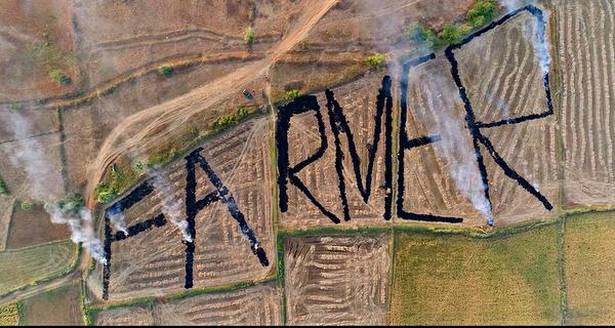 Swathi then points out that it’s not just the farming community who’ll be affected by this, reminding people that, “many of our grandparents and ancestors were in these communities.”

Working with the medium of grass and land, the artists learned from the farmers themselves, observing their methods of burning grass and cutting crops.

“The farmers did the font as we wanted their fingerprint on the land art as it is their story,”Swathi describes, “You’ll see the font is not fixed. They kept plenty of grass for their animals so what we used is the excess. We were mindful not to waste a single thing too.”

The resulting artwork can be viewed in a drone-powered video where smoke emanates from the burning word that is ‘farmer.’ Upon sharing the video on their social media, copious curiosity and conversation arose around the central issue.

Looking back, Swathi wishes the project could have been bigger but she has no regrets, “We just hope for the issue to be brought back to light in this new way. As artists we express ourselves in different ways and we want to keep doing that. The saying ‘farming is injurious to life’ is a sad statement and that’s just not how it should be.”