Riches of the soil – the wealth in local knowledge systems

By Shiba DesoronJan. 18, 2017in Perspectives 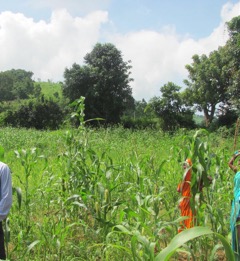 But as he had planted 75 crops in his 2 acres field in village Kunduguda in the Niyamgiri hills of Odisha, it still meant that he got a harvest for 70 crops.

While such farming may be considered as ‘poor’ in terms of cash generation, it is an important example of ecological agriculture, as was practised before the modern interventions of hybrid seeds, mechanisation, monocultures and chemicals. The ‘prosperous’ farming methods of the green revolution usually push for putting all the eggs in one basket. There, failure of even one crop can become a matter of life and death.

Is not then our logic of what we consider as ‘richness’ and as ‘poverty’ grossly perverted?

While the impressive figure of 75 crop types on Adi’s farm may be more of an exception than the rule even within the practitioners of traditional multicropping, it is usual to find 30-35 crop species, a mixture of diverse millets and pulses, oilseeds, maize and seasonal vegetables, in most such farms, grown traditionally with a logic of combinations that is inherent rather than explicitly taught.

Such multicropped systems are a heritage that we can no longer choose to ignore. Their richness – in terms of diversity, nourishment, resilience and sustainability offers important lessons for all of us who depend upon food and farming.

An important aspect of the richness of local agricultural systems lies in the seed sufficiency of these. The currently advocated model of agriculture makes the farmer dependent on external agencies for seeds since most hybrid seeds hold little viability in the next year, leading to a trap of dependency and debt.

On the other hand, seed-saving and seed-sufficiency has been an old and still prevalent system in India. According to Loknaath Nauri of Korandiguda village, ‘he who does not have seed is not worthy of being called a farmer’.

The culture of saving seeds is not restricted to any one small region but permeates throughout the country. Vijay Jardhari of Beej Bachao Andolan narrates a local story from the Garhwal region of Uttarakhand on this. The story talks about thetime of a deadly drought that spread in the area. When people from outside visited after some time, they found deadbodies strewn on the ground, and no sign of food. And then they spotted a dried bottle gourd with seeds stored inside, tied to the roof of a house. Farmers had chosen to die rather than eating the seeds that would be needed for feeding the fields next year. Connected to the ecosystem

Richness of nutrients and microbes in soil, availability of water during the right seasons, and close attention to the needs of the plant often requiring hard manual labour, are inputs that often go into this system. These inputs are more directly connected to their surrounding ecosystem and unlike the ones used in modern agriculture, these can further enrich the system rather than causing degradation or pollution. Because of the symbiotic relationship of this agriculture with forests, it can not be practised in isolation or at the level of a mere individual, while the forest degrades to nothingness. It needs the forest to be healthy.

That is why we often see such people come together and raise their voice against forest destruction. One of the slogans that has rung through the Garhwal mountains of Uttarakhand during various protests for protecting the forests is also this:

This is reiterated by Gond adivasi Ijamsai Katenge associated with Amhi Amchya Arogyasathi of Gadchiroli in Maharashtra, ‘We have very little savings in a bank. Jungle is our bank.’

The dependence on forests is also mirrored in the lives and daily diets of many such communities. Their meals are often supplemented by tubers, green leaves, berries, mushrooms, honey and small catch from the forests. This dependence on uncultivated foods also adds a richness to our diets. A richness which has saved many lives during times of calamities and crop failures by giving something to fall back upon. And yet, a richness which is looked down upon in this upside-down world, and so is fast being lost. But it still holds out in some corners. Adi, for instance, mentions how in a year, his family gets sufficient crops from their fields for 10 months and depends on the forests for the other two months.

The logic of many ofthese practices is a mixture of intuition, tradition and experience. It often comes with a way of relating to the environment in a more direct manner.

In some areas, the practices after being sustained for long, have lost out and eroded under the pressures of urbanisation and markets while in others, they sustain. How do these practices sustain themselves? How have they carried on for centuries? How do they evolve?

These are questions with no direct answers. There is a story that Vijay ji narrated of how during the drought, one farmer kept ploughing his fields.When asked why, he answered that it was so that he does not forget how to work his land.

The logic of many of these practices is a mixture of intuition, tradition and experience. It often comes with a way of relating to the environment in a more direct manner, viewing soil as a living entity. They are internalised and taken from one generation to another in forms of rituals, stories, songs, and day to day life.

Today, it is clear that in continuing our economic growth-focused model of development and agriculture, our environment is getting severely depleted, health and nutrition badly affected and our agricultural system is becoming a debt-trap. And yet, while‘environmental sustainability’ and ‘climate change’ have become buzz words, instead of all efforts being focused on saving what remains of such local knowledge systems, these systems are being further threatened.

While local agricultural systems are contextual in their approach, policies framed by governments expect a regular pattern of farming. For instance, Loknath describes how in his upland field, where plants are sown according to slope height, line sowing is being pushed by the government, defying the plain logic of common sense.

The policies can also unwittingly cause malnutrition as in the case of shift to cash crops like soyabean. With such a shift to cash crops, there is also often a parallel regressive power shift with  the control of seeds shifting from women to men since now the seed is bought from the market. Adding to the issue of malnutrition, forests are taken away for timber plantations, creating monocultures that no longer can provide the nourishing base that they have grown up with.

As articulated by Ruha Hikoka of Niyamgiri hills, ‘Sarkar (government) will not be able to give the diversity we eat from our farms and forests. They are snatching our food away, cutting our jungles, and telling us to plant hybrid crops and eat urea-fed rice. Our health is getting affected by it.’

Then there is the issue of taking away of forest and grazing commons as well as agricultural land for purposes of mining, industry or infrastructure. At the same time, there are strategic attempts to break down the traditional informal dispute-resolution systems, and instead create structures that are easier to control from a central level.

There is also the inevitable and inescable truth of the connectivity of the planet. Local agricultural systems are resilient in face of natural calamities, but what are the stretches to man-made destruction that they would be able to tolerate? What about the increased unpredictability in seasons, coupled with the decimation of flora and fauna, the degradation of soils and the severe depletion and pollution of water sources? These are crimes that the local traditional farmers may also have to pay for, even though they had played no part in creating this situation.

And yet, if there is any hope or possibility of fostering resilience, it can not come without understanding, appreciating and practising once more such contextual forms of agriculture and life.

This article is based on thoughts and information shared by the above-mentioned persons during the Vikalp Sangam on Food organised in Muniguda, Odisha (17-20 September 2016)

Read The Forest on Their Plates, based on the diet of the Adivasi population in Muniguda