Nila – A river and its relationships

By Sujatha PadmanabhanonOct. 03, 2018in Environment and Ecology

These hands speak of years of kneading, patting, rubbing, shaping as they coax a lump of clay into taking the shape of a water jug. It takes over ten minutes of working at the wheel. As the wheel is set to turn with the help of a long stick, the hands move deftly towards the centre. The clay changes shape a few times, lengthening for a moment, shortening the next. We are reminded of a ballet dancer, stretching out to the skies and then suddenly bending forward. We are at Gopalan’s shed, and watch him work at shaping drinking water jugs on the wheel, and later shaping long bits of clay into jug handles. “You would think its all ready now,” he says. “The handle itself will take another two days of work, till its perfectly shaped!” Most of what he has already crafted is waiting to be fired: glasses and water jugs for an order from an Ayurveda hospital in Guruvayoor, about thirty kms away from his hometown of Ezhumangad in Kerala’s Palakkad district. Gopalan remembers that he was barely 12 years old when he learnt the craft from his father. He has been working with clay ever since and has been witness to many changes over the last five decades and more. Earlier he used to make large storage pots and cooking vessels, but more recently he has diversified into making jugs, glasses, plates, cups and saucers.

The kumbhara community that Gopalan belongs to migrated eons ago from Andhra Pradesh to Madurai, from where they came to Kerala. Registered as OBCs, the Kumbharas speak a different language called Kumabaran, which has some similarity to Telugu. Today their community in Ezhumangad has 32 potter families, but only 8 still practice the skill. Many have given it up in preference for daily wage labour.

Gopalan is a member of Craftila, a unit of Vayali. Vayali began in 2004 with the aim to learn traditional systems around the Bharatpuzha River (called Nila in Kerala) that flows through the districts of Palakkad, Thrissur and Malappuram.

The members of Vayali are all youth volunteers and have organized themselves into 7 units, each focusing on a different area: media, folk expressions, bamboo band, school involvement, palliative care, river-related actions, and crafts. Each group has a coordinating committee chosen from amongst its members, and two to three of them are nominated to represent their group in Vayali’s Executive Committee which oversees the entire organisaiton’s functions. The objective of Craftila is to revive and support dying art and craft traditions along the river. For the youth involved, it’s been a journey of discovery of the rich traditions and linked knowledge systems, all revolving around the river and its banks. Craftila is currently involved in a detailed documentation of all crafts along the river, like the making of the ‘Malapuram’ knife, stone based idols, weaving, instrument making, making mirrors and even ship building!

Currently, Craftila focuses on supporting five crafts: pottery, bell metal, grass mat weaving, weaving of cloth, and bamboo crafts. A major support for all the craft persons comes from the opportunities Craftila gets to participate in exhibitions in different parts of Kerala and outside, and in schools and colleges. The young volunteers help at the exhibition stalls, and the sale proceeds are given to the craft persons after recovering costs. Last year, Vayali managed to get the Nila River listed as one of the Kerala Tourism Department’s “Responsible Tourism” destinations.  Tourist agencies encourage tourists to visit these communities by the river. Tours are organized where tourists visit the homes of the craft persons to watch them at their craft and most often buy an item or two to carry back home. Dance and music performances are also arranged in advance, allowing the artists to get an additional income.  Besides the marketing help that Vayali extends, it also tries to help craft persons deal with the challenges they face in procuring raw materials and financial assistance. At Ezhumangad, we get an opportunity to also visit a large pottery unit that interestingly has been financed by one of Gopalan’s sons, who did a stint in the Middle East! Large clay rings wait to be fired, after which they will be fitted into wells. Kuttan the potter at the site tells us that there is a local demand for well rings. The ones he shows us have not been made for any order, but he is sure that they will find buyers for them.  Alongside the clay rings are rows of cooking pots in two sizes. These were done for a large order from Ernakulum. Apparently, clay pots are the preferred vessels for cooking fish curry! Earthen cooking pots are still popular vessels to cook in

While a well ring takes about two weeks to make, 75 of the larger and almost double that number of smaller cooking pots are fashioned in a day! Kuttan prefers to be hired here, though he used to earlier work from home. When we ask him why, he points to a small house in the distance. His work space is a bit cramped he says, and prefers the security of income in the per piece rate: Rs.8 per pot on the potter’s wheel (now electrified), and the same for the bottom of the pot shaped by hand with the aid of a wooden stick; Rs.12 for urulis or shallow cooking vessels; Rs.350 per day for polishing or placing the pots in the furnace. Kuttan at an electrified potters wheel Kuttan’s wife works here as well and helps with polishing, but his children have not picked up any of the skills. They are away at college, he says, and help with carrying pots to the kiln whenever free. Interestingly, we learn that while some of the kumbhara community members have moved away from their traditional livelihood, people from other castes and religions have picked up the skill of pottery.

Interestingly, Vayali’s work in the arena of handicrafts began in 2006, when their members were looking for someone to make ornaments for their artists. They came across Siva Narayan, the last remaining person from the Moosari community, who was still practicing handcrafted bell metal in Deshamangalam Panchayat. Narayan though was on the verge of giving up on the craft, unable to withstand competition from factories that started mass-producing bell metal pieces. Today, with support from Craftila, he has repaired his work shed, and keeps an age-old craft alive.

We visit Narayan, but unfortunately he is indisposed with a high fever. His wife shows us his workspace, and tells us that she too partakes in the craft by helping to grind the mud and make a paste of the clay to prepare the mould. Interestingly, he holds demonstrations of his work in nearby schools and colleges, and also has school children visit to watch him at work. We wonder if this could possibly keep the craft alive in future. Will your own children follow suit, we ask? He shrugs the question off, and whispers that they will follow whatever interests them. Meenakshi, his young daughter, though, is a bundle of excitement. She, along with her mother, show us every single piece that the work shed has: door locks, lamps, bells for anklets and waist belts worn by dancers including the highly revered Velichappadu oracles, a small mould to make achappams which is a traditional Kerala snack, 8 auspicious items that form an ashtamangalya set used in pujas or at weddings. The ashtamangalya is made in miniature sizes (on Vayali’s suggestion) so that tourists could easily carry them back. Meenakshi and her mother display some of the bell metal items Relationships between artists and craft persons along the banks of the Nila still exist, though a bit tenuous given the changing times. Gopalan makes the ‘Pulluvan Kudam’, an earthen instrument used by the Pulluva community that sings as they perform serpent worship in temples, sacred groves and homes. We go over to meet a couple in their home, who have just returned from Guruvayoor, where they went door to door singing in praise of the serpent Gods.

The instrument is a pot, large in size, but to get the best sound quality it has to be thin. Gopalan’s experienced hands know just how to craft it. However, Pulluvan Gopalan and Jyothilakshmi, who perform for us, tell us that they now have to cover the earthen pot with leather. They often travel by bus carrying the instrument with them, and a plain earthen one could break enroute. The leather covering affects the sound quality of the instrument, but that’s a compromise that they live with.

The pot in the Pulluvan Kudam instrument is made by Gopalan, the potter The music of the Pulluvas is also aided by Narayan’s bell metal craftsmanship. Narayan makes the metal rings that are used in a single-stringed violin instrument that they play called the ‘Pulluvan Veena’.

“Earlier we were unknown to the world outside,” says Pulluvan Gopalan. “Now with Vayali’s help, we play for tourists who come home. Foreigners visit us too, so our music is travelling abroad too!” he adds proudly. Recognition also came in the form of an invitation to the couple to perform in an advertisement for Asian Paints!

“I am going to ask Gopalan to make another Kudam for me,” Pulluvan Gopalan says thoughtfully, “which I won’t cover with leather. I would like tourists to hear the original sound!”

The metal rings for the Pulluvan Veena are made by Narayan, the bell metal craftsperson 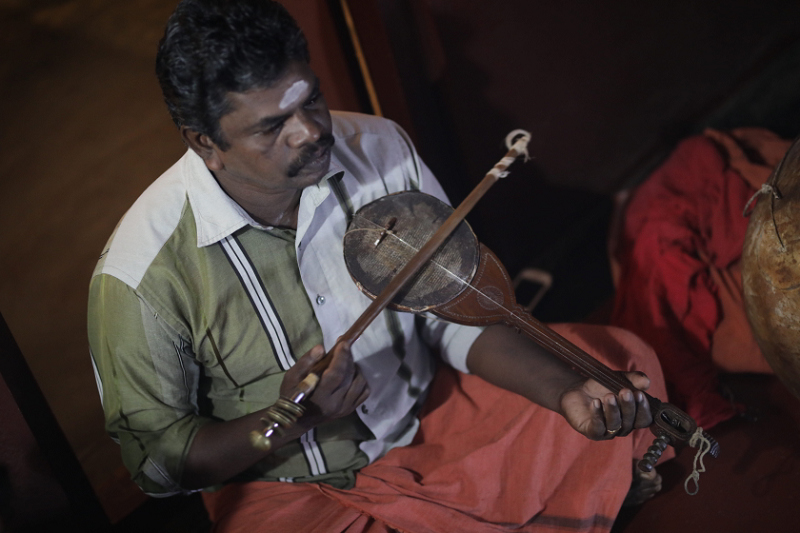 Pulluvan Gopalan and Jyothilakshmi play for tourists at their home

An entire ecosystem gets its sustenance from a river! A complex web of crafts and arts flourished around the river, each nourishing and being nourished by the other. The relationships between artists and craft persons and the river in a sense reflect the web of inter-dependence in the natural world.

We leave its banks with a sense of hope….interacting with Vayali’s young members, we realize that the interest and enthusiasm that Vayali has managed to inculcate in some youth who live in the villages along the river, may just help to keep alive beautiful age-old cultural traditions, and in the long run even help revive the ailing river ecosystem itself!