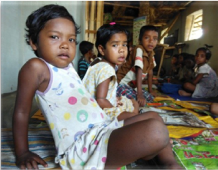 Introduction: The collective and the School

The Lakshmi Murmu Smriti Shishu Vidyalaya was set up on 26th January 2015 at Chaachanpur. The collective imagination was to have an open learning center for the villagers and a Primary School for the children of Chaachanpur and neighboring villages. Currently children from the age group 3-9 years are enrolled. The school is run by Chaachanpur Mahila Kalyan Samiti, a collective formed by women from Chaachanpur and a few adjacent localities around Chhatna block of Bankura district in West Bengal.

The organization works towards upholding the voice of adivasi[1] women. Although it is a collective run by women majorly from the Santhali community their sphere of engagement also includes women from Lohar and Karmakar community. One can say that the focus of work is on the adivasis and the marginalized caste groups residing in the hamlets of Chattna block of Bankura district.

The core objectives of the organization are:

1.      To generate a conducive climate for the women of Chaachanpur and surrounding hamlets to come together and share their hopes, vision, dreams, grief and also mundane problems of everyday life.

2.      To explore through discussion the cultural shifts that their own community has undergone.

3.      Generate necessary political awareness and catalyze critical sensibilities amongst women through discussions to become aware of their rights as citizens and prevent their community from becoming passive subjects of Developmental aid and services.

Participation is considered both means and an end in engendering a transformation through which the entrenchment of dominant patriarchal practices and monetization of social relations could be resisted. Attempts have been made through various means to reinitiate the cultural practices of the adivasi community to preserve social cohesion and mutual interdependence; alternatives to accumulation through exploitation and displacement are discussed, cultural reconstruction initiatives, discussion sessions on socio-political issues have been a few of the major activities of the organization.

[1] Adivasi is understood by us as ethnic groups, which have shared a common fate in the past century and from this, has evolved a collective identity of being adivasis. It is not meant to imply that adivasis are the original inhabitants (Xaxa 1999). The term adivasi is not just a colloquial term for the category or word “Tribal”, nor is it a loose translation. Tribes, as understood originally in the context of indigenous people from North and South American (or perhaps African) continents have perhaps had a very different history and points of entry into the modern world. Homogenized under the same category “tribal” by European ethnographers and anthropologists for their own convenience of understanding, these myriad variety of communities and cultures across different landscapes had then been (and still are being) clubbed under one simplifying category that ignores their nuanced differences. To continue to do so is to continue to perpetrate injustice to the vast and mystifying histories of human civilization and the varieties within. In the context of the Indian subcontinent (a part of which later became India), indigenous people (or to use the white term “native”) have had their own stories and their own distinct and separate ways of communion and kinship than say, the American Indians or the Maasai in African continent. We have tried to maintain the use of the term adivasi throughout when referring to the indigenous people in what is currently demarcated as the sovereign nation-state of India, to maintain this distinction and respect such difference.

Thank you sir, We remember your contribution and would be grateful if you help us again.

You can reach out to us at