How Many Farmer Producer Companies Are There in India?

By Annapurna Neti and Richa GovilonNov. 05, 2019in Economics and Technologies

Given the increased policy and intervention focus on producer companies, it becomes imperative to understand exactly how many there are.

On July 5, 2019, the Centre announced a plan to promote 10,000 new farmer producer companies over the next five years.

India already has many such companies, which have been registered since they were introduced in 2002 through an amendment to the Companies Act. While registered under that Act, they have several restrictions in line with principles of mutual cooperation: for example, they can have only producers as shareholders, with voting rights based on one-member-one-vote.

Academics, policy-makers and social sector organisations across the spectrum view these companies as critical components of interventions designed to improve the livelihoods of India’s farmers.

However, nobody seems to know how many such companies have been registered in the country. The Ministry of Corporate Affairshas not yet released disaggregated data on producer companies separately from other types of private limited companies. Many policy-makers cite NABARD figures of around 2,000 farmer producer organisations, covering only those organisations which have been supported by NABARD, and which may be registered as producer companies, cooperatives, or societies.

Given the increased policy and intervention focus on producer companies (PCs), it becomes imperative to understand how many PCs there are, their spread across states, their activities, number of shareholders, total share capital raised and other such details.

As an attempt in this direction, we analysed data available from multiple sources such as Ministry of Corporate Affairs, NABARD, Small Farmers’ Agri-business Consortium (SFAC) and others to put together a robust database of producer companies in India.

As of March 31, 2019, a total of 7,374 have been registered in the country. Almost all states and union territories have registered producer companies.  However, a large number of companies are concentrated in some states: Maharashtra alone accounts for more than one quarter of all producer companies in India.

Table 1: States with the most number of producer companies (Top 10) 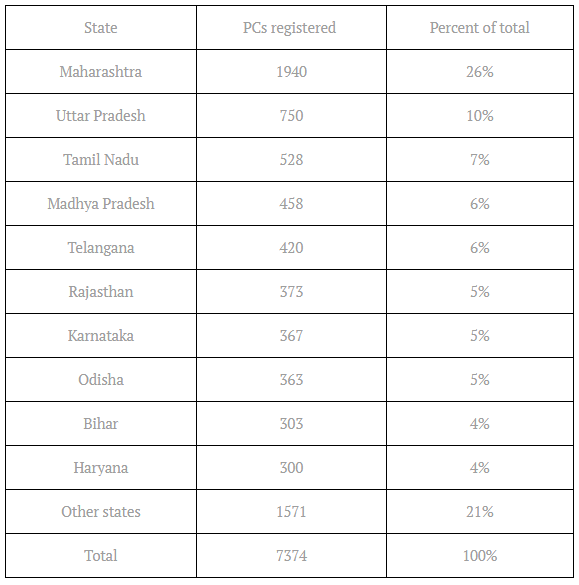 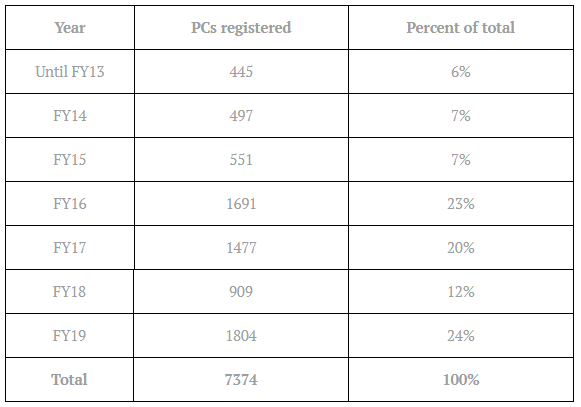 Percentages do not add up to 100% due to rounding

The Ministry of Corporate Affairs has ‘struck-off’ or is in the process of striking-off 445 producer companies for failure to commence or maintain business operations or act according to principles of mutual assistance specified in the Companies Act. In addition, 3 companies have been designated as having ‘dormant’ status. Therefore, out of 7374 producer companies registered, 6926 have ‘active status’.

Out of these, 6391 producer companies are working on agriculture and allied activities, such as cultivation, plantations, dairies, non-timber forest produce, fish, poultry, etc.

For example, the PUC of top 100 companies (Rs 587 crore) accounts for more than two thirds of the total PUC of all companies and at the other end, there are 189 companies with just Rs. 1000 or less PUC each. The median PUC is Rs. 1.06 lakh for all registered companies and Rs. 1.10 lakh for companies with registration status as ‘active’.

Percentages do not add up to 100% due to rounding

Low PUC limits their ability to undertake business activities, as significant funds are required to trade in agricultural commodities.  One of the main reasons for promoting producer companies is that if a large number of small producers pool their resources, they can undertake commodity trading and processing activities.  However, the majority of companies are under-capitalised and therefore unable to do so.

A large number of producer companies are being formed every year; and with the new Union budget announcement, more will continue to be formed. These companies require substantial support in starting and managing business operations, and improving incomes and reducing risk for their members. An estimated 4.3 million shareholders (most of whom are small and marginal farmers) are counting on it.