When we first heard about Sholai School, located amidst the pristine nature of the Palani Hills in the southeastern Indian state of Tamil Nadu, we were so captivated by its description that we decided to take a local bus to visit the establishment. On their website, the school described themselves as “a centre for holistic education”, focusing on a “commitment to integrating and balancing education and environmental concerns”.

As excited as we were, we were not prepared for the intriguing realities of what this fascinating alternative school had to offer. Our arrival at the school was met with an urge to explore every nook and corner of the campus – an adventure that found ourselves getting lost in the wilderness. We were amazed to find out that the school exposed its students to the importance of wildlife, farming, carpentry and, most interestingly, sustainable energy. The sweat, the mud and the hunger were definitely worth the wait.

After devouring a plate of traditional south Indian food in the dining hall, we had the chance to catch up with the founder of this not-so-traditional school. A wise and skilful Englishman, Brian Jenkins founded Sholai School in 1980 after being inspired by the teachings of renowned Indian philosopher Jiddu Krishnamurti.

Among other captivating topics, Brian spoke to IPF about his motivations for creating an establishment that runs purely on using its own resources in the valley to generate energy.

“To do things is very much a part of education as well. We stress on responsibility – it’s a word Krishnamurthi very much uses – to respond adequately to a situation. Krishnamurthi’s approach is that you learn to live in the present, you don’t live according to habits. You respond to each situation – that’s the meaning of the word ‘responsibility’. People see it more as duty, but responsibility has a different flavour to it.”

What inspired you to create an alternative school?

Regular schools condition children and teachers, and it’s the usual picture that the adult is superior to the students. Krishnamurti made it rather clear; you’re not in that position. If you feel that you should tell children what to do and how to behave, you’re just conditioning them and creating an authoritarian situation and I was very uncomfortable with that. So when I started reading Krishnamurti I became conscious about being more aware of one’s self amongst self-centeredness, so that’s when I started moving in that direction.

So why as a British citizen did you decide to form your school in India?

When I was a teenager I was aware of the poverty in the world, I was aware of problems poor people have to face and, therefore, I decided that I would like to go to a so-called “third world country”.

When I was 21, a Buddhist Monk came to Sussex University. I was very struck that he didn’t lean to the back of his chair; he sat straight and something about this bearing and manner impressed me. So I took a year off university and I came to India.

My grandmother passed away in 1980 while I was in India and there were a lot of changes taking place in the Krishnamurti School, where I had been for 14 years. So I thought I needed to come out of the umbrella and go out into the world. I had money to start a school so that’s what I thought in terms of doing.

Could you tell us how the school runs on sustainable energy and whether there are any difficulties you’ve come across?

We’re blessed because we have a brook running right through the campus, therefore, we can run a micro-hydro plant which helps us produce electricity thanks to the natural flow of the water. The problems are finding people who are competent to make what you need. There’s not that much around but I was very fortunate. A professor from the India Institute of Science built and designed a micro-hydro plant for us. It’s a pump with no fuel that he produced for us, he’s our neighbour and he’s now 84 years old.

We have quite a lot of biogas plants; we have all five of them producing gas for cooking. We can run an engine on biogas and since we have a lot of trees, we have a lot of firewood. So that is biomass that we can burn, but the important thing to make it sustainable is to have an efficient wood burning stove and being in a valley does not help. With Biogas we tend to have problems with leaks. 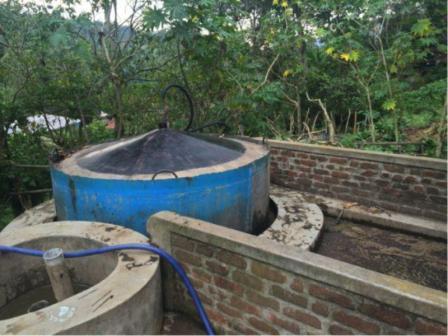 Here is one of the five Biogas plants at SHOLAI School

We have more than six hours of sun a day; I think that’s anything between a 160 and 200 days a year approximately – that’s a good amount of sun! If you’re thinking three hours or less than we have mostly, 280 to 310 hours a day and that’s good for solar energy because you need sun to run it. We got our solar panels from the government. As they rose production, the solar panels improved and they are much more powerful and cheaper today. So we have the sun to run on solar panels and we have water for running micro-hydro and this produces electricity. In terms of difficulties, the maintenance is much less than if you had a regular system but it’s our own energy so we have to maintain our own system. We are limited to production so you have to be very abstinent. When you turn the light on, you then don’t forget to turn the light off. I have a highly decentralised system; we have the dining room area where we run the kitchen (mixer, wet grinders, TV, satellite devices, lighting). Whereas the computer room, the workshops, the auditorium, the girls’ and boys’ hostel all work under different systems.

Why is it more beneficial to produce your own electricity?

If you’re using government electricity, the grid (the Tamil Nadu grid or the British grid) will have to keep the electricity at 250 volts all the time and they’re pumping it in and they have transformers. At the power station it’ll be 100 % electricity but by the time it comes to your house, there’s so much loss on the way it’ll only bear 5% of the regional production. You lose energy on the way. So one is better off producing it on one’s own site.

I’m well aware that the electricity is doing tremendous damage, like carbon reduction and global warming. So when one is sensitive to the environment then one definitely wants to live in within their own consumption of electricity.

Are there any green projects that you’re currently working on or have worked on in the past?

We did a project with the government called Geographical Imaging System (GIS) to create maps of the whole valley where the school is – 120 square kilometres. That includes the forest where elephants, panthers, Indian bison and 133 species of birds live. So we collected data and we connected the data with maps and we created a whole project of this for the government and we finished it a couple of years ago.

The intention being to care for our resources. That includes our natural resources, where people generally don’t; they usually think of aluminium and coal under the ground. So we’re looking at wildlife; the mammals, the birds, butterflies, reptiles.

Why do you think it’s important for everyone to be environmentally conscious?

Take the example of aluminium. In order to get aluminium you have to destroy forests and dig below the forest, but instead, we could recycle aluminium. There needs to be some dedication, some seriousness by first considering the planet. Our second concern should be the costs and so on and so forth. But it’s because people keep putting money first.

We will suffer if we don’t care for the climate. But to me, we’re still looking at it from a self-centred point of view. What about the point of view from the planet? Imagine yourself as the planet, you’re being abused repeatedly by so many activities of man.