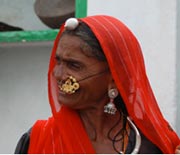 Kesi Bai (48) resides in the Bhilwara District, a region in India that is severely drought prone. Despite the male-dominated way of life, Kesi Bai has played an important role in saving and developing pastureland and raising awareness for water crisis management.

As water scarcity is a major issue, Kesi Bai mobilized women towards securing and restoring common resources. The women often faced challenges in their community due to ingrained biases from the men. Kesi Bai displayed great courage by sitting in on the male-only community discussions and expressing her views on how to develop the land to save water. She had to pierce through an extremely strong political clout of upper caste (Thakur) men to have her voice heard as they laid charges against her of breaking tradition of subservience. They opposed Kesi Bai and questioned the credibility of her work on pastureland development and accused the accounts of the pastureland of being non-transparent and forged. Kesi Bai took initiative in inviting experts to review the land and proving these accusations to be wrong.

The resulting confirmation of her success boosted confidence in Kesi Bai and her work. To this day, 14 years later, the village gets all its fuel wood from the 75 hectares pasture, which was earlier not in a suitable condition to be used for animal grazing by people of the lower caste, who were heavily dependent on animal grazing for their living. Kesi Bai has been so successful in improving the quality of life in her rural community, that she was elected Sarpanch (head) of the Chitamba Panchyat (the village-level institution of self-government) for a four-year term. In this way, she has been able to challenge traditional views and promote gender equality and women’s participation in community decision-making. The success of natural resources being restored allowed for further changes in the community, such as girls being permitted to attend school and women raising their voices against the social custom of spending huge amounts of money on death ceremonies. Kesi Bai’s courage and work in water management influenced changes in gender relations beyond her community to other villages outside of the Bhilwara District.

Read about her work in Hindi