Dryland farming revolution by dalit and adivasi women … and some men!

By Ashish KotharionDec. 14, 2018inFood and Water The work of Deccan Development Society (www.ddsindia.com) has never ceased to amaze me, over the last two decades. Consisting mostly of dalit women farmers, and now also adivasi women farmers, DDS has helped achieve food sovereignty and security for several thousand families, as also empower these women towards autonomy and self-reliance in other fields, including media. It works in a few dozen villages in the Sanga Reddy District of Telangana.

Using the occasion of a Vikalp Sangam Core Group meeting (26-28 November 2018), held at DDS’s Krishi Vigyan Kendra (Pastapur), we visited some farmers.
Breaking from past tradition, DDS has also started working with men farmers (some with large landholdings) who are willing to switch to organic, biodiverse agriculture, including venturing into vegetables. In Baradipur we met G. Narasimha, who switched from chemically-intensive to organic farming 3 years back, encouraged and aided by DDS. Today he grows a variety of vegetables, as also millets, cotton and sugarcane. He has already shown equal production (about 40 tonnes/acre) of sugarcane to those using chemicals, with Rs. 30,000 less cost; and predicts that this year’s production on one farm will be 60 tonnes and can even go higher!  At our next stop, Qasimpur village, farmer N. Mallesam told us he has pledged to go up to 80-90 tonnes/acre on his farm! Standing in the sugarcane fields, dwarfed by some of the tallest cane I’ve seen, we could well believe these farmers’s claims!
Mallesam and Chennamma, a couple, also nurture a variety of organic vegetables including onion, carrot, radish, brinjal, cucurbits, gourds of various kinds, and spices like mint. Mallesam was earlier in the stone business, quit it when it was not doing too well, and came into farming, encouraged to go organic after attending some DDS meetings. As Sarpanch of his village, he is also trying to influence others to take up organic cultivation. Chennamma and he also keep trying new experiments with natural pest-control methods; he showed us one (extremely foul-smelling!) which had chicken eggs kept in lime juice for a few days before being used for pests on crops like onion.
Organic vegetables from these and about 60 other farmers in the region are now being consumed locally, but also being sold to an organic food consumers’ (and health) group in Hyderabad, Disha, through DDS. These consumers have also become part of a new initiative by DDS, ConFarm, in which they support farmers with an upfront grant of Rs. 10,000/acre, receiving organic produce in return, and building a relationship by visiting them and working on the fields (see http://ddsindia.com/www/pdf/ConFarm%20Launch.pdf.
In Potapalli village, farmers Sundaramma and Mariamma took us to a field with a mixed rabi (winter) crop of jowar (3 varieties), masur, chickpea, sesame, flax, safflower, and others. They are able to produce enough with dryland farming, their own seeds, and no chemicals, for their families; and with good rains, also sell into the market. They told us about how before DDS facilitated their farming transformation, many dalit women were working as construction labour, servants in others’ houses, etc; several had land given to their families during the bhoodan movement or land reforms, but were never able to cultivate it and sometimes did not even know where it was as land records were never updated. DDS intervened to clarify all this and get them control over such lands, helped clear it of stones or level it, and provide the initial set of seeds. Now a seed bank is maintained by the head of the village women’s sangha, which women can borrow from when in need.
From here we went to Ippapalli village, where Shamlamma showed us her very impressive (and pretty!) collection of traditional crop seeds. She grows and maintains a total of 28 species/varieties in kharif, and 9 to 15 in rabi season. She told us even in a drought year, when the rabi crop fails, the kharif production is enough to feed the family. The fields for the two seasons are different, thereby allowing fallow and nutrient replenishment by ploughing crop residues back into the soil.
We were about 20 people from the Vikalp Sangam core group meeting visiting Shamlamma … surrounded by this group of inquisitive people shooting questions at her, Shamlamma was a picture of self-confidence … a far cry from the kind of system-imposed helplessness one often finds dalit families in.
Our final stop was Lachnai Tanda village, a settlement of Lambadi adivasis. In the last 2-3 years DDS has broken new ground in working with adivasis, and our brief interaction with the Lambadi women suggested that it is working the same wonders with them as it has with dalit women. There is a 3-year old women’s sangha here, working on food, agriculture, health, legal issues, community radio, and even video (DDS is well-known for its Community Media process, including India’s first community radio station and a film-making unit run by dalit women). We got there in the middle of a ‘Sangha Festival’, a process in which women are given a platform to talk about their experience with DDS (and other issues) including problems, complaints, etc. We asked them about their experience, and were told that a lot of knowledge regarding seeds and medicinal plants that they were losing is now coming back, that they have moved from being down to 7-8 crops to over 30 varieties, that they are focused on achieving household food security to reduce buying food from outside, and that land regeneration has also increased fodder output which is a crucial input for their pastoral livelihoods. As we were leaving, the women brought out a beautiful woven shawl; we had already been eyeing their lovely clothes and jewellery, some of which they make on their own (though apparently the youth are not doing it any more).
Inspirations galore … even as there are also questions galore … for another time! Meanwhile, some images: 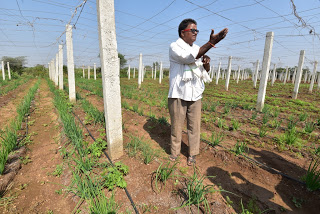 N. Mallesan of Qasimpur village at his organic vegetable plot Chennamma of Qasimpur village in her organic sugarcane field 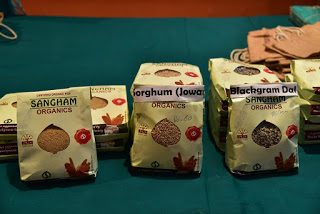 Sangha Organics, a farmers’ company set up by DDS women, sells a diversity of organic produce Cupcakes of millets and jaggery/honey, for Vikalp Sangam core group members not only a tasty guilt-free treat but feel-good, supporting local enterprise!

Some of the seed diversity maintained by Shamlamma of Ippapalli village Motibai, a Lambadi woman of Lachnai Tanda village, explains the work of the women’s Sangha