By Meenakshi Radhakrishnan-Swami on Sep. 16, 2014 in Livelihoods “I thought it was a prank by my friends and almost didn’t reply,” Ramesh Prabhu grins as he recalls the early morning text message he received in February 2014 from RK Dubey, the chairman and managing director of Canara Bank. Dubey had just read a news report on Prabhu’s company, Three Wheels United (TWU), and was interested in teaming up with the start-up. For the 34-year-old chartered accountant and ISB graduate, this was a dream come true. “Our biggest challenge has been to persuade banks to partner with us and here was the head of one of the largest banks in India, contacting us directly.”

When Prabhu met the banker at his office, he was asked why TWU hadn’t reached out to Canara Bank. “I told him we had been summarily dismissed — our proposal didn’t even get a hearing.” So, when Dubey said that the bank would willingly finance all autorickshaw drivers under the start-up’s Namma Auto programme — not just in Bengaluru, but across India — an understandably-wary Prabhu asked for it in writing. Three weeks later, an MoU between TWU and Canara Bank was signed, with the CMD taking a personal interest in the project. “This is a wonderful model where the company ensures 100% repayment. There could be nothing better for a banker,” says Dubey. It’s also exactly what the four-year-old start-up needs to drive into the next level.

What does TWU do? The Bengaluru-based company was started in 2010 with the aim of improving the lives of autorickshaw drivers, among the most ubiquitous denizens of any major city and often, the most reviled. Most social enterprises that work with the community focus on ensuring passengers get hassle-free rides on demand for non-extortionate sums. Prabhu, though, believes in approaching the problem from the other end, based on insights he readily rattles off. More than 80% drivers of Bengaluru’s 150,000 autos don’t own their vehicle — it’s either rented or borrowed. In several cases, the driver borrows from local moneylenders at usurious rates of over 40% to buy a vehicle, which is seized when he slips on even one instalment, even if it is more than half paid for. Most drivers aren’t part of the mainstream financial system, nor do they have any social or financial security, leaving them prey to moneylenders and the vicious cycle of debt and grinding poverty. All of this impacts their self-esteem, says Prabhu, leading to friction between passengers and drivers. “People either turn to Facebook and call for no-auto days to protest this behaviour or look for technology-driven solutions such as aggregators. Nobody tries to understand drivers’ attitude and why they overcharge.”

TWU attempts to solve this problem on three fronts (hence the name): create a financial base for autorickshaw drivers by inculcating a saving habit in them, helping them open bank accounts and apply for loans; create alternative revenue sources; and help them to switch from noisy, polluting two-stroke engine vehicles to the environment-friendly and fuel-efficient four-stroke engines and at a later date, retrofit emission-reducing kits to reduce their ecological footprint. Since the company started, it’s developed a network of over 6,000 drivers and helped over 400 drivers get loans for new autos. “We have a near-zero default rate and will have over 1,000 loans by December and 2,500 by next year,” adds the founder-CEO proudly. 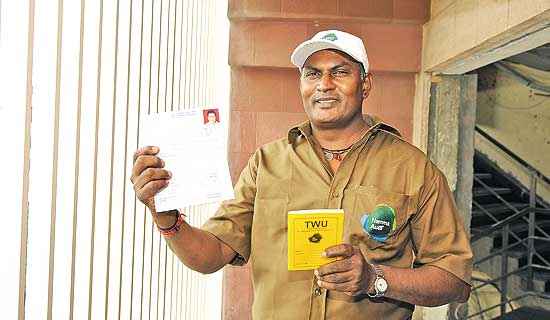 TWU operates in Bengaluru and nearby areas but its genesis lies in the Netherlands, where Stef van Dongen, after a visit to India in 2007, kicked off the Hybrid Tuk Tuk Battle (HTTB) to find a less polluting solution to our autorickshaws. The 38-year-old van Dongen is the founder of Enviu, a co-creation platform that incubates impact-driven companies, partnering with NGOs, corporate foundations and investment funds for co-funding its projects. “Over 500 engineers, entrepreneurs and organisations in the Netherlands and India joined and it resulted in seven working prototypes to reduce emissions by at least 40%,” he explains.

In 2009, the HTTB results were announced — HAN’ds On Eco Tuk, designed by students of Hogeschool Arnhem and Nijmegen emerged as the winner for a kit that uses the LPG direct injection system and saves 26% energy and 53% fuel costs. Prabhu read about it and contacted van Dongen, but he was brutally frank. “The winning kit would cost over Rs 10,000 to install. I told Enviu it would never work. Autorickshaw drivers can’t afford to care about the environment — they need ways to make more money,” says Prabhu. Enviu agreed and partnered with Prabhu to work on a more holistic solution, leaving the kit to be reconsidered in the future. Along with the Netherlands-based DOB Foundation, Enviu invested 90% of the Rs 4-crore equity capital of TWU, with Prabhu chipping in with the balance. How does the company work? It teams up with NGOs such as WHAD and Subhiksha to implement a five-stage plan. The first is to reach out to the drivers, usually through meetings with the women in their family. The next step is to open savings accounts for the drivers and get them to save regularly. Since drivers operate on a daily balance sheet, the NGOs, too, collect money from them on a daily basis, which is deposited in their accounts — rental for an autorickshaw is typically Rs 200 a day, and TWU has centred its model on the same amount. Daily collections also make it easier to red flag possible delinquents early on.

Then come steps three and four, teaching drivers cost-saving measures and helping them increase their revenue through alternative streams such as advertisements on the vehicle and the soon-to-be-launched Namma Auto (TWU’s registered brand) book-a-ride service. The last step, which is helping secure loans to buy four-stroke vehicles, is limited to those drivers who prove their reliability in the earlier steps. Even so, TWU operates on the principle of joint liability, a concept popularised by the microfinance industry, where groups of drivers stand guarantee for each other.

It’s been over a decade since the Supreme Court banned two-stroke autos and mandated moving to four-stroke vehicles. Despite government subsidies, the switch hasn’t happened completely; in Karnataka itself, says Prabhu, 60-70% are still two-stroke autos. It’s not hard to understand why autorickshaw drivers can’t buy new vehicles. A four-stroke autorickshaw costs around Rs 1.5 lakh and banks, at best, lend up to 75% of vehicle cost. For most drivers, raising margin money of 25%, that is Rs 37,500, for the four-stroke auto is virtually impossible, given their daily gross earnings of only around Rs 1,000. TWU gets them to save Rs 200 a day for three months, raising at least 10% of vehicle cost. It deposits the rest as a fixed deposit with the bank, against which the driver is given a personal loan. Maggie Thomas, TWU’s community manager, explains that of the Rs 5,200 collected from every driver every month over 26 days, Rs 500 is deposited in a recurring account to create a vehicle maintenance fund, Rs 390 is TWU’s service charge, Rs 1,000 goes towards repayment of the personal loan and Rs 3,000 to the vehicle loan. The interest rate varies from 10.5-11.5% with a 60-month repayment period, although TWU’s model ensures loans are repaid within 36-37 months. “We’ve had drivers who rented rickshaws for 18 years. Here, the cash outflow is the same as under the rental system but in three years, you become the owner. Two weeks ago, we had three drivers repay their entire loan in just 23-24 months,” adds Prabhu. 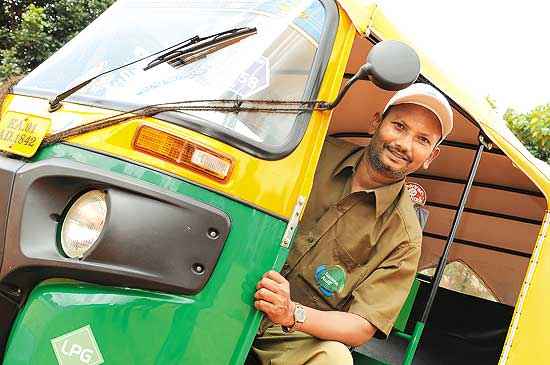 P Damodaran, who drove a rented vehicle for five years, was introduced to TWU when the “ladies association” that visits his neighbourhood organised a health programme.  “Some men approached them and said it would be good if something could be done for us as well. That’s when they told us about TWU,” says the 43-year-old autorickshaw driver. Damodaran, along with 10 other drivers, collected Rs 15,000 each and got a loan from Corporation Bank through TWU. “Initially, keeping aside Rs 200 everyday was difficult, but now I’ve got only eight months to go on my loan. I like not being answerable to anyone and save on gas as well,” he says. Jagadish K, who quit his work at a private garments factory two years ago and started driving his own autorickshaw, bought with a loan arranged by TWU, agrees. “I have now got a bank account and need to repay only another Rs 41,000. I can even afford to take a day off now and then,” he says.

TWU is now seeking to ensure that the drivers in its network can take a day off work every week without endangering their finances. It is working on creating alternative revenue streams, such as advertising on vehicles and an SMS-based service for fixed pick-ups and drops. The pilot for the book-a-ride facility kicked off in July and Prabhu is confident of generating 35,000 rides a month by December through this service, giving drivers an assured income for weekdays. It is hoping to get FMCG and telecom brands on board Namma Auto vehicles, so drivers can turn into micro-retailers, selling water, toffees, phone recharge cards etc., on the move. Cedrick Tandong, business development manager at TWU, says there’s also a loyalty card tie-up in the works, with a leading fuel company as well as supermarket chain, so drivers can get small discounts at these outlets.

The value-add services will ensure better incomes not just for the drivers but also TWU. The company’s business model allows for multiple revenue streams. Apart from charging a service fee of Rs 15 per day from its drivers, it earns an interest of 9.5% on the deposits made towards drivers’ margins and will get a commission on vehicle advertisements (Rs 1,000 per vehicle per month) and in-vehicle sales. The company will charge a service fee of Rs 10 per ride from passengers for the Namma Auto book-a-ride service as well as Rs 5 per trip from drivers who sign up under the service but aren’t part of its loan network. TWU also hopes to sign on with autorickshaw manufacturers as a channel partner, so it can earn commissions on OEM sales. “We have an understanding with TVS already, but are not a business channel partner yet,” says Prabhu. Currently, it earns around Rs 5,000 per vehicle sold to TWU drivers.

Already, TWU earns over Rs 3 lakh a month, which will go up to between Rs 7 lakh and Rs 10 lakh a month by December 2014 thanks to these added revenue streams, estimates Prabhu. “We will achieve operational break-even by end 2014,” he adds. “Our community-building model has a long gestation period. It is only now that the base has been built.”

Now, TWU has tie-ups with Corporation Bank, Canara Bank and Pragathi Krishna Gramin Bank, with Canara Bank willing to back the company when it goes pan-India. That is not likely to be anytime soon, though. The immediate target is to enter two new cities next year and interact with drivers where it can’t find suitable NGO partners, for which TWU will set up an independent trust. This will require additional funding of $1.5-2 million, estimates Prabhu, adding that he’s seeking investors. “Prabhu has never come to me for funding himself, only his drivers. I am ready to provide venture capital and even working capital funding,” declares Canara Bank’s Dubey. Now Prabhu knows whom to call. And no, this is not a prank, either.