By Namrata JoshionOct. 27, 2017in Society, Culture and Peace 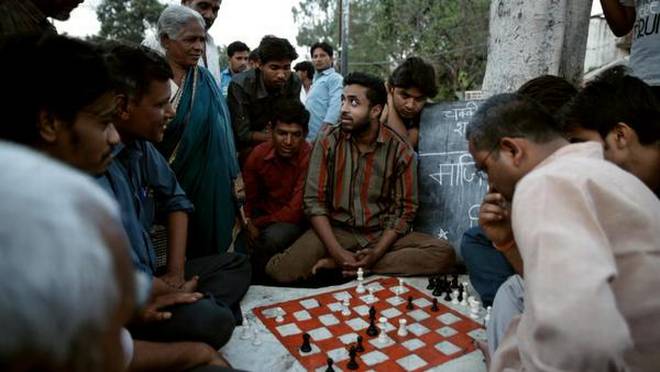 Crowd-funded and crowd-directed, Turup was made in a way that gives a whole new meaning to cinema verite

Chess runs like a thread through the daily rhythms of Chakki Chouraha in Bhopal; the moves are played on the streetside between chores—cooking, sweeping, mopping—or furtively, in the time away from work. Against the backdrop of men challenging each other to matches, three intertwined stories take shape: of an old household help named Monika who has always lived life on her own terms; a former journalist, Neelima, trying hard to get a foothold back in the profession even as she fights marital issues; and a young janitor, Lata, who is in love with Majid, a driver.

These are tales of ordinary people, played on screen by off-the-street faces, most of them from Bhopal’s working class settlements. But the novelty about Turup (Checkmate) doesn’t just end with its cast of non-actors. It’s a rare film in which the credit roll names no individual director.

No lack of direction

In Turup, there is no director, yet everyone is a director. The 70-minute Hindi feature film was made collectively over the past two years with local residents doubling up as crew and actors, often rehearsing for their parts late after work. Their homes are the locations, their own families can be seen milling about in the background.

Turup acknowledges the “support and solidarity of friends and comrades.” It is an uncommon exercise in grassroots cinema based on volunteerism and cooperative spirit. The basic script and screenplay are by Maheen Mirza, an FTII graduate and independent cinematographer who works with various collectives and people’s groups, and Rinchin, who writes and works with people’s groups and movements in Madhya Pradesh and Chhattisgarh.

The process of making it was a collaborative and evolving one, where ideas about script, dialogues, shooting and even music were shared, discussed and debated, and elements added, deleted and changed before being finalised. “Each person has contributed her/ his own unique vision, skill and perspective to it, guiding and often manoeuvring it to reach its logical conclusion,” says Mirza. Since the vision is a collective one, the directorial credit has also been shared and given to Ektara Collective.

This is not a first for Ektara. The Bhopal-based independent, autonomous, non-funded and informal group of individuals seeks to collaborate creatively with various communities to make films that are rooted in their own reality and individual experiences.

“For political thought formation, it is important to occupy cultural spaces. There is a need for creative expression and cultural engagement,” says Rinchin, who is also part of Ektara’s core group. “Most of the cinema is aspirational in nature, it doesn’t seem to arrive from a familiar context but from somewhere far away,” says Mirza.

“What if we made our own (cinema)?” Rinchin explains of the origins of Ektara’s non-escapist model.

Turup lends a whole new dimension to cinema verite. It is grounded in working class lives in Chakki Chouraha, but could hold true for anywhere in India. The cooperative spirit reflects in the essential simplicity and straightforwardness of filmmaking. There are no elaborate, long-drawn sequences; and in fact the narrative moves from one short, terse scene to the next. The performances are artless, the language everyday, the conversations commonplace.

It lends veracity to the relationships, believability to the emotions and interactions, be it between an ideologically-opposed couple, two siblings or two lovers. There is nothing filmi about it. Mirza explains how even the aesthetic emerges from the context: “The way a scene is lit up, how people are illuminated. The idea was to make it real rather than beautiful or else the believability would break.”

Religion, caste, class and gender debates play out against a growing fundamentalism. There is the Virat Hindu Sammelan looming large, slogans raised in support of gau mata and sanatan dharma, and WhatsApp messages against Muslims and inter-religious marriage. Chess becomes the metaphorical playground for all these religious, business and political clashes. In a world where politics, religion and corporates are cosy bedfellows, the poor and marginalised are the pawns.

You can sense the underlying community spirit and also the points of friction, the hatred gradually raising its ugly head. Yet there is also hope, that all is not entirely lost, that subversion can come from within, that the barriers can be transcended from inside. For every person who lights the communal fire, there is one to douse it by pointing towards the real problems—inflation, poverty, unemployment. Even as the film shows the challenges thrown at our syncretic culture, it also assures us that the warp and weft of life is holding on just fine. Conflict and confluence of culture goes hand in hand.

Eventually, it’s the women who push the boundaries with everyday wisdom. How Lata runs down the Hindu politicians: “Paani tak nahi peete mere haath se aur mera kanyadaan karenge. (They won’t even drink the water I offer them but want to marry me away.)” Or the nice rendition of her doubly-disadvantaged love—when her lover Majid says she is better off than him because she has religion on her side, she shoots off rhetorically: “Is there any place without caste?” You have Monika telling Neelima that it wasn’t as though she couldn’t get married but that she chose not to. In one deft exchange, we see how much more self-aware she is than the educated journalist she works for.

Despite the lack of a director, the film doesn’t lack direction. Not only is it clear-eyed about what it wants to say but also how it wants to says it—with neither shrillness and stridency, nor cynicism and bitterness. The music ties in beautifully with the spirit of the film. It talks of the eternal sound of the universe (anhad ka baaja); of how the formless king is decorated with visible finery (Nirgun raja pe, sirgun sej sajayi), of the fleeting God (Maula maula lakh pukare, maula haath na aaye).

The resolution of all the contemporary dilemmas is seen in the philosophical legacy of poet-saint Kabir—in synthesis and syncretism and in Sufi spirituality—and that forms the bedrock of the soundtrack. The guidance and support in musical arrangement came from the Kabir musicians of Dewas—Dev Narayan Saroliya, Kaluram Bamniya and Narayanji Delmia. “They sing Kabir like we breathe,” says Mirza.

All the collaborators worked for free. Funds for the production were raised through individual contributions. The idea was to make the film’s ownership so broad-based that no single entity would influence its content or making. It also helped make the collaborators the channels of distribution. “They see and then show the film around as something they are invested in. This builds a critical and diverse audience for cinema. In a country where the scope of watching independent cinema is limited, this becomes critical to help the film reach as many people as it can,” says Mirza.