By Ashish KotharionJan. 24, 2019in Economics and Technologies

Auroville’s chequered reputation has for long been a mystery to me … celebrated as an example of multicultural living that is trying to create a microcosm of a harmonious world, and, quite the opposite, criticized for being a neo-colonial project that is not only alienated from the Indian population around it but in many ways looks down on it (see for instance
https://www.firstpost.com/india/auroville-50-years-on-story-behind-indias-utopia-ignores-the-contribution-oppression-of-tamil-locals-5702781.html). Established about 50 years back on a huge chunk of land in Tamil Nadu, and containing people from several dozen countries who are attracted to the possibility of a spiritually meaningful life guided by the teachings of Sri Aurobindo and The Mother, Auroville has attracted people looking for alternative ways of living life, but also plenty of controversy in the way its residents manage their affairs.

I spent 4 days there starting on Christmas day in 2018, facilitated by resident Sangeetha Sriram, in connection with a preparatory meeting for the Alternative Economies Vikalp Sangam. I found many glimpses of the complexity and contradictions of any such experiment. But here I’m only going to talk about a few initiatives and individuals that I found positive. In celebrating these, I am not suggesting that this part of Auroville over-rules the problematic aspects … including that it is subject to government oversight and control, and recently invited PM Modi for its 50th anniversary! But frankly I do not think I have enough of an understanding to talk of these.

So here are some snippets of what I found inspirational, with the potential of connecting to other similar initiatives in India, for mutual learning.

Regeneration of a completely barren landscape in 1994 into a thriving forest of over 120 species over about 7 acres, and experimenting with a diversity of local/traditional vegetables. All this with two principles: no hired labour, and no external inputs (soil, water, etc); the exception being that Bernard felt the need to introduce Australian acacia to help create the initial biomass and micro-climate that then enabled other (indigenous) species to be encouraged. Several threatened species have come up in the forest; and several varieties of vegetables that have otherwise disappeared, including some incredible red bhindi (lady’s fingers)! 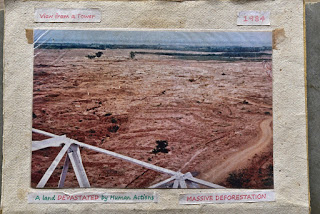 Auroville’s first farm, started by The Mother  in 1968. Turned completely organic in 2013. Over 44 acres, with no external inputs, the farm produces about 40% of Auroville’s fruit, vegetable, egg, and milk needs. With 13 full time staff, all from local villages (including young Ramanan who comes from a poor local family), the farm experiments with various techniques: permaculture, zero budget, biodynamic, agroforestry, natural farming, etc. Lots of soil and water regeneration work. Increasing outreach to surrounding farmers, especially youth to encourage them to stay on in agriculture (Ramanan himself being a possible role model). A ‘wild zone’ along the boundary enables some wildlife to survive, and do less damage to the crops (but there is also an electric fence!).
For more information: https://www.auroville.org/contents/2877
See also, a short video clip of Ramanan: https://youtu.be/IDFmaRvIdHQ Another example of remarkable regeneration of a barren landscape. 70 acres of forest that in 15 years is moving towards approximating the Tropical Dry Evergreen vegetation that existed in the region before various forces devastated it. Sadhana provides a serene environment for those who want to find themselves and meaning in life, “a forest for people to grow”; it has various programmes including an Atma Vidya Kendra for children of Auroville and surrounding villages to indulge in fun-learning activities outside of school. Over 15 years over 10,000 volunteers have come to spend time and take on various activities, some of them going on to do innovative things in other parts of the world (including a Sadhana Forest each in Haiti and Kenya). Over 160 local plant species have been planted or encouraged to grow; a preliminary survey shows over 90 species of birds. Local exchanges work on the ‘gift economy’ principle; anyone can come have lunch, for instance, for free or donating anything they want. They are now constructing a ‘gift chai shop’ where local people can come and enjoy, chat, dialogue. I loved the architecture: simple, tepee like structures built with bamboo, thatch, and recycled material including in a couple of them, tetrapack roofing!
For more information, see: https://sadhanaforest.org and 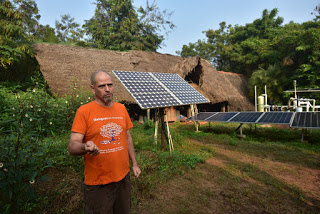 Initiated as a collaboration between the Tamil Nadu government and Auroville, this Institute focuses on training government officials in various aspects of sustainability. Auroville’s various experiments in this, including on agriculture, animal husbandry, forest regeneration, health, craft/music based livelihoods, are used as the field exposure. Over a lovely dinner of locally grown millets and rice hosted at SLI’s campus, Ram shared several stories of officials who have gone on to do some remarkable work with villages in their constituencies.
For more information, see: http://tnavsli.in/Institute/ 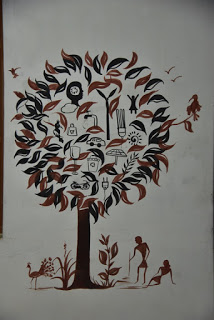 “We don’t know anything about the food we eat” was the first thing Krishna, a farmer who runs this farm told us. Then proceeded to take us on a tour of what must be one of the most biodiverse farms I’ve ever seen. 140 ‘local’ crops and other plant species, growing in what seems to be chaotic profusion, but with carefully thought out synergies and mutualities. By ‘local’ is not necessarily meant indigenous, but what grows easily without external inputs in this area. At every step Krishna would stoop down or point upwards to a crop and reel off its nutritional, taste, medicinal, cultural, ecological and other values. Asked if he’d learnt things from local farmers, he said “of course, this is all Tamil culture! But in modern life we have forgotten the basics …” The farm also runs a café with an incredibly tasty traditional recipe meal that we were lucky to partake of.
For more information, see: http://www.aurovillepermaculture.in/
See also a short clip of Krishna: https://youtu.be/SJj6fZ7avo8 A fascinating journey through music awaits anyone who goes to Svaram, run by Aurelio (originally from France). A sound park has some amazing instruments that you can play with, a ‘sound bath’ immerses you in a hour of body therapy, and much else. Aurelio also works with about 40 local youth who earn livelihood making musical instruments. When we met he took us through a couple of impromptu jam sessions, with a diversity of instruments he had laid out; it was amazing how people like me who have never really played an instrument could get into a rhythm with 10 other people!
For more information, see: http://www.svaram.org
See also a short clip of Aurelio explaining how the global roots of music are found in India: https://youtu.be/ZoA6-ewuRpg We also visited Auroville’s economic initiatives, including PTDC, Free Store, Nandini, and Food Link … but on these, another blog to come soon (meanwhile, pl. see /article/a-decade-of-pour-tous-distribution-centre-ptdc-the-evolution-of-an-auroville-institution/)! And, while not quite in Auroville, but v. much sharing the philosophy of local, healthy, organic … and building on traditional recipes (hence the byline ‘past food’!) … we were treated to a lovely meal at Maiyam, a small venture started by young Vijhay Murugavel. 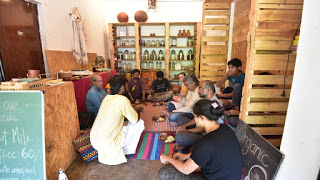 First published on the blog of Ashish Kothari