How and why the anarchist tradition came to be comprehensively sidelined in India is not entirely clear. The fact is that very few left leaders, writers or activists in India think of themselves as anarchists. And yet it seems to me that many of them have drawn inspiration from anarchist thought in one way or another, and that we would greatly benefit from a more explicit recognition of this anarchist influence – actual and potential. There are varieties of anarchist thought (some are pretty weird), just as there are varieties of socialist thought; my concern here is with what one might call cooperative anarchism or libertarian socialism. This is more or less the opposite of what anarchism is often claimed to mean by those whose aim, as Bhagat Singh put it, is to make revolutionaries unpopular. This aim is typically achieved by portraying anarchists as impulsive bomb-throwers who want to destroy the state through violent means.[1] Resistance to state authority and oppression is certainly one of the core principles of anarchism. It is also true that many anarchists believe in the possibility of a state-less society, and perhaps even in the need for a violent overthrow of the state. But anarchist thought certainly does not start from there. In fact, as Chomsky has argued, it is even possible for a committed anarchist to lend temporary support to some state institutions vis-à-vis other centres of power: “In today’s world, I think, the goals of a committed anarchist should be to defend some state institutions from the attack against them, while trying at the same time to pry them open to more meaningful public participation – and ultimately, to dismantle them in a much more free society, if the appropriate circumstances can be achieved.”[2]

If anarchist thought does not begin with the idea of a state-less society, let alone the violent overthrow of the state, where does it start from? It starts, I believe, from the same point as these lectures – a deep suspicion of all authority and a principled opposition to the concentration of power, whether it is the power of the state, the corporation, the church, the landlord or the head of a family. As Chomsky argues, this does not mean that all authority and power is illegitimate, but it does mean that if it cannot be justified, it must be dismantled.

Some people believe, against all evidence, that power becomes harmless if it is exercised on behalf of the working class. This is the basis of the hope that a “dictatorship of the proletariat” would pave the way for the withering away of the state and a state-less society. The dangers of this idea were exposed early on by anarchist thinkers such as Michael Bakunin, a contemporary of Karl Marx, who said: “I wonder how Marx fails to see that… the establishment of such a dictatorship would be enough to kill the revolution and distort all popular movements”. The fact that anarchist thinkers predicted with great clarity what would happen in societies based on an apparent dictatorship of the proletariat is not the least reason why it is worth paying more attenion to them. Similarly, anarchist thought can help us to develop a healthy suspicion of various forms of vanguardism, including the notion that left intellectuals are the vanguard of the proletariat. This notion is of course a terrific deal for intellectuals, since it puts them in command. Vanguardism found a fertile soil in India with its long tradition of Brahminism, guru worship, and deference to authority in general. It is at variance with the spirit of anarchism, which includes a basic faith in people’s ability to take charge of their own lives and struggles. Michael Bakunin (30 May 1814 – 1 July 1876) was a Russian revolutionary anarchist, and founder of collectivist anarchism

Indeed, anarchist thought and libertarian socialism are not limited to a fundamental critique of power and authority – far from it. They also build on constructive ideas about social relations and economic organization, including voluntary association, mutual aid, self-management, and the principle of federation. The basic idea is that a good society would consist, as John Dewey put it, of “… free human beings associated with one another on terms of equality”.

One of the most eloquent exponents of the power of free association and voluntary cooperation was Peter Kropotkin, the 19th-century anarchist and author of Mutual Aid. A zoologist and geographer by profession, Kropotkin spent many years in Siberia, where he observed countless examples of mutual aid among animals. Just to give one example, he observed how, just before the winter, large numbers of deer would gather from hundreds of miles around and congregate at the precise point of a river (the Amur) where it was narrow enough for a large herd to be able to cross it safely and reach greener pastures on the other side.[3] He concluded that cooperative behaviour is a plausible outcome of biological evolution – an idea that is being rediscovered today by evolutionary biologists and game theorists. Kropotkin went on to study cooperation in human societies (which involves much more than biological evolution) and documented in great detail how mutual aid played a pervasive role at all stages of human history, despite being often repressed by the privileged and powerful. More than a hundred years after the publication of Mutual Aid, we have many more examples of human activities and institutions based on principles of voluntary association and mutual aid. Anarchist principles of political action have played an important role in the international peace movement, the environmental movement, the fall of the Berlin Wall, the Arab Spring, the Chiapas uprising, the World Social Forum and the right to information movement in India. There have been vibrant experiments with workers’ cooperatives and self-management in Spain, Argentina, and Kerala, and also other examples of economic applications of anarchist principles such as the free software movement. In India, the social organization of many tribal communities is still based on a strong tradition of mutual aid and participatory democracy, evident for instance in institutions like exchange labour and Gram Sabhas.

Even the edifice of electoral democracy rests on a simple act of mutual aid, namely participation in elections: voting does not involve any personal gain for anyone, since a single person’s vote cannot influence the outcome of elections, and yet most people do vote, often losing a day’s wages and braving long queues, harsh weather or even physical danger. Without mutual cooperation, there would be no democracy, even in the most elementary form of electoral democracy. As this example illustrates, mutual cooperation does not necessarily require altruism or self-sacrifice; it can also build on simple habits of thought (specifically, habits of sociability and public-spiritedness) that an enlightened society should be able to foster.

Coming back to the left tradition in India, elements of anarchist thought can be found in one form or another in the life and writings of many Indian thinkers, even if they never thought of themselves as anarchists, and indeed were not anarchists. I have already mentioned Bhagat Singh, who had clear anarchist sympathies. Just to give one or two other examples, Ambedkar was not an anarchist by any means and yet we can find traces of anarchist thought in his writings, for instance his notion of democracy as a “mode of associated living” based on “liberty, equality and fraternity”. I think that many anarchists would also be proud of Periyar, who taught people to resist the oppression of caste, patriarchy and religion and have faith in themselves. Even some leading Marxist thinkers belong here: for instance, Ashok Rudra’s critique of “the intelligentsia as a ruling class” has some affinity with Chomsky’s analysis of the role of intellectuals in the modern world. Also within the Marxist tradition, here is something K. Balagopal (one of India’s most committed and thoughtful left activists) wrote around the end of his lifelong engagement with a variety of popular struggles:

“What seems to be required are ‘localised’ (both spatially and socially) movements that are specific enough to bring out the full potential and engender the full self-realisation of various oppressed groups, subsequently federated into a wider movement that can (in a free and democratic way) channelise the aroused energies into a broad movement. 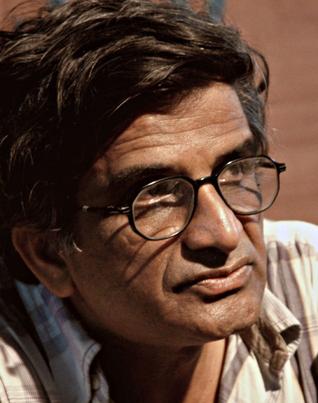 This is quite different from the Leninist notion of a single vanguard party that would centralise all knowledge within itself and direct (top down) the struggles of the suppressed masses. In such an effort, the suppressed masses would not even be half awakened to their potential. Even if such a party were to claim that it learns from the people, and even if [it] were to honestly try to do so, the very strategy would be inadequate. If there can at all be a single ‘party’ which would lead a movement for social transformation, it can only be a federally structured organisation, whose free and equal units would be the political units, centred on the self-directed struggles of various sections of the deprived.”[4]

This sounds to me like anarchist thought par excellence. As I have illustrated earlier, anarchist principles are alive not just in Indian political thought but also in social life and popular movements. None of this is to say that the time has come to embrace anarchism (or libertarian socialism) and give up other schools of thought. But greater openness to anarchist ideas would certainly bring some fresh air. For instance, I believe that anarchist thought could help us to think more clearly about the relation between caste and class, beware of all authoritarianism, enlarge our understanding of democracy, and open our eyes to the workings of power (for instance, patriarchy and caste discrimination) within our own movements. Last but not least, anarchist thought can inspire us to change the world without waiting for state power, and give us confidence that democratic struggles here and now can be, as Bakunin put it, “the living seeds of the new society which is to replace the old world”.

1.Bhagat Singh did throw a bomb once (in the chamber of the Central Legislative Assembly), but it was little more than a firecracker and the gesture was largely symbolic. There were no casualties.

2.Chomsky (1996), Powers and Prospects: Reflections on Human Nature and the Social Order (London: Pluto), p. 75. This statement must be read in the light of the distinction Chomsky makes between “goals” and “visions” (p. 70): “By visions, I mean the conception of a future society that animates what we actually do, a society in which a decent human being might want to live. By goals, I mean the choices and tasks that are within reach, that we will pursue one way or another guided by a vision that may be distant and hazy.”

One response to “Anarchism in India”