Across the world, communities have embraced the opportunities of being demonetised

The beki, the Bristol pound and other social currencies have the potential to rediscover the joy of collective support.

Money rules our lives. With one simple decision, a government can affect the lives of a billion people as dramatically illustrated by India’s sudden withdrawal of old Rs 500 and Rs 1,000 notes with effect from midnight on November 8. A month later, as millions still queue up in front of banks and Automated Teller Machines, with a few dozen dying while waiting in line, we should ask: how did we come to be so utterly helpless in front of those who hold the reins of money? Can we achieve some autonomy in our economic lives?

Demonetisation can actually contribute towards freeing ourselves from the shackles of governments, banks and corporations by helping us create more prosperous lives. But this is a very different kind of demonetisation.

On a recent visit to Beckerich, a commune in Luxembourg, I learnt about the beki, a community currency that has been in use since 2013. Equivalent to the euro in value, bekis can be used to pay for a host of local products and services – buying bread at the local baker, paying for local green energy, buying produce directly from farmers. 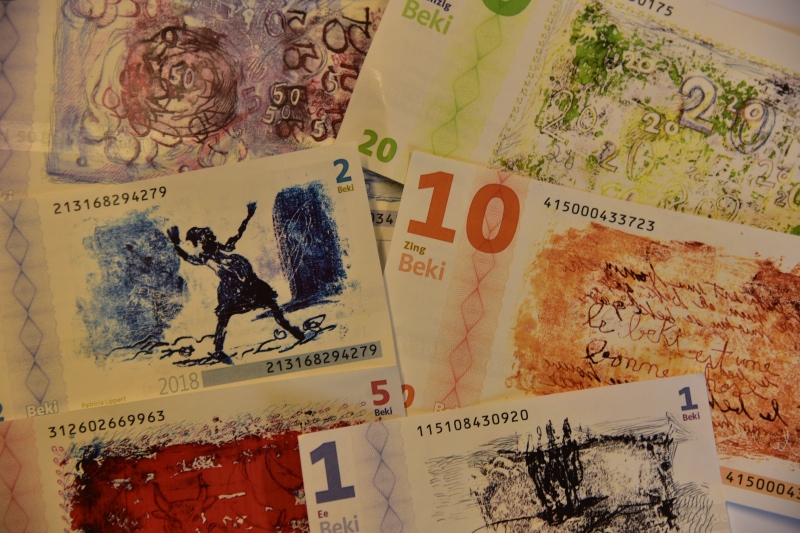 Max Hilbert, who facilitates the currency’s use for the commune, told me that the beki stimulates local production and services, and facilitates stronger local social relations as its use is based on knowing local producers and consumers.

Community or social currencies like the beki are increasingly being used across the world.

Launched in 2012, the Bristol pound in the city of Bristol, in England, is equivalent to the pound sterling in value and can be used to buy products and services at over 800 outlets in the city. Locals even use this currency to pay taxes, and the city’s former mayor, George Ferguson, took his entire salary in it. According to its website, the idea behind the Bristol pound was to boost local economic activity by “continual circulation of money within the local economy”.

Last month, in Spain, the city council of Barcelona introduced a pilot project to introduce a social currency, with euro parity, in a city district. The project is a bid to stimulate local businesses and will start in the new year.

There are several such examples from across the world.

There are also increasing initiatives for non-monetised exchange, such as sharing skills for free. In Athens, Greece, I met members of Mesopotamia, a network of about 400 individuals who are part of a time-sharing network. Several of them volunteer at a special learning centre for children.

In the UK, the network Spice Time Credits enables people to volunteer for activities that “strengthen communities” in exchange for credits that can be spent on an activity of their choice – including at theatres, museums and sports facilities – across the UK with partners of Spice Time Credits. At last count, the network has 25,000 members sharing over 4,00,000 hours, working with 1,200 organisations and services.

A crucial aspect of such processes is the respect given to all kinds of expertise. For instance, one hour of gardening services is worth the same as one hour of IT skills. This means that people normally devalued by the mainstream economy can also be valued by society. Dignity can be restored to people. Plus, the time credits system is interest-free, avoiding the credit-debt vicious cycles that mainstream economies are plagued with.

So how is this relevant to India?

India has already seen some form of these local community-oriented initiatives.

From across the country, we hear of people surviving demonetisation by extending credit and paying for others short of cash, expanding mutual support.

At the Radhasoami Satsang Sabha in Dayabagh, Agra, demonetisation has had little effect as its members have long minimised the need for money, depending on mutual caring and support, charging only the bare minimum for goods and services.

Relations of barter, or of collective support in times of house repair or harvest or travel or marriages or looking after common lands, have been around for millennia in India. Many such relations have disappeared under the onslaught of commercialisation and monetisation, and many were based on unequal social relations. But they often represented relationships of exchange based on social ties, caring, and sharing, values that are given a death blow when all exchange begins to be valued in terms of money.

A revolutionary demonetisation, led by the people, would bring back such relations. In urban neighbourhoods, or clusters of villages, or in educational institutions and companies, members could decide to exchange some products and services without using money or through locally-created currencies. Imagine a university of 1,000 people, each of whom offers even just five hours a week of free service, and in turn can avail of some other such service.

Far-fetched? Not really. Hundreds of communities across the country have already created common assets like village ponds, check dams, plantations, sabhaghars (meeting halls), or contributed to services like rotational patrolling of forests and livestock management, or older students tutoring younger ones, through free labour or shramdaan. There are myriad examples of people offering free music or art lessons to the less-privileged in slums, or aid in times of disasters. This could become more widespread, and if complemented by social currencies, dependence on centralised monetary systems would further reduce.

But such systems are ultimately based on trust and reciprocity, and on appropriate coordination mechanisms. Our society is increasingly fragmented, we are alienated from our neighbours, influenced by the market, which wants us to be individualistic (and then deal with the resulting personal crises through retail therapy). Non-monetised exchanges and local currencies require rebuilding the community, relations of trust, reciprocity and solidarity. It is a tough call, but not impossible. In any case, the centralised monetary system also asks us to trust in an anonymous power and to bear the consequences when people wielding such power take decisions that leave us gasping.

I am aware that trust is also in severe deficit in a society riddled with discrimination and exploitation. The dynamics of caste, class, gender and ethnicity have to be simultaneously dealt with, and tendencies like xenophobia resisted, for a localised economic system to work justly. The struggle for social justice has to go hand in hand with the struggle to regain control over the economy.

But across the world community, currencies or time-sharing are already being used to empower socially and economically marginalised people, such as those in the slums of Mombasa in Kenya where residents are using the bangla-pesa, a form of local money. Simultaneously, there are also calls to democratise the overall banking and monetary system, and movements of producers to take control over the means of production. Finally, the fact that ordinary people can undermine the inordinate power of the state and private corporations by taking control over production, consumption and exchange can be profoundly subversive. Community currencies incentivise greater independence in economic relations, threatening currently dominant structures. It is no wonder then that the central bank of Spain has warned against the introduction of the Barcelona social currency. This subversive element is alone worth the exploration of such demonetisation.